The Human Herpes Viruses Content from the guide to life, the universe and everything 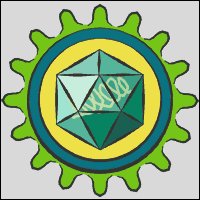 The viruses of the family Herpesviridae are responsible for much woe among humans, chickens and certain species of monkey. This Entry makes the assumption that the latter two groups cannot read, and therefore only covers those viruses affecting humans – the 'human herpes viruses'. They number eight in total, and are as such rather unimaginatively numbered one to eight:

At this point, it is worth mentioning a couple of things. The first is that even the more eminent virologists probably won't have bothered to memorise the above numbering system, as there's no particular point in doing so. The second is that the numbers in the list above don't run in the correct order. This is because the human herpes viruses can be split into three groups, alpha, beta and gamma, according to their genes and biological characteristics, and this is reflected in the grouping of the viruses above.

One of the curious properties of the herpes viruses is their ability to infect an individual and then lie dormant, thus allowing for a lifelong infection that is currently impossible to eradicate. This has made the herpes viruses very successful, and some varieties are present in a high percentage of the population. The viruses achieve this by having two phases of infection:

The herpes viruses may thus reactivate after months, years or even decades, and it is even possible for an individual to be infected without any symptoms and then become ill years later. Reactivation usually occurs when the individual's immune system is depressed or compromised.

The herpes simplex viruses are transmitted by contact, via saliva and genital secretions. They commonly cause cold sores, genital ulcers and herpetic whitlow1, but may produce a life-threatening encephalitis2 in newborns that contract the virus from their mothers. For more details, see the entry on Herpes Simplex.

The varicella-zoster virus is transmitted mainly via droplets in coughs and sneezes. It is responsible for chickenpox, aka varicella, in individuals infected for the first time, and may also cause shingles, aka zoster, if the virus reactivates in those previously infected. The virus rarely causes pneumonia or encephalitis as a complication of chickenpox. For more details, see the entry on Chickenpox and Shingles.

The Epstein-Barr virus3 (EBV) is widespread in populations around the world, and is spread in the saliva of infected individuals. EBV usually does not cause symptoms when the individual is infected for the first time during childhood; however, half of all those affected aged 15-25 years will develop glandular fever, aka infectious mononucleosis. Glandular fever is covered in the Entry on Diseases of the Tonsils. The virus is also responsible for oral hairy leukoplakia in individuals with a compromised immune system, and has been implicated as a causative agent in several forms of cancer, including nasopharyngeal carcinoma and various lymphomas.

Cytomegalovirus (CMV) is spread in bodily fluids such as saliva and urine, and is usually acquired during childhood without any symptoms of infection. However, it may cause a mononucleosis similar to that of EBV in children and adolescents who are infected for the first time. This is usually characterised by a fever, with other symptoms such as sore throat, rash and swelling of the lymph nodes being either rare or not particularly notable.

On the other hand, women who become infected with CMV for the first time during a pregnancy are at risk of passing the infection to the foetus. This can lead to congenital vision loss and hearing loss, and other complications including jaundice, low birth weight and premature birth. It may also produce an acute illness in the newborn. CMV can also cause serious disease in individuals with a compromised immune system, in whom it may produce pneumonitis4, retinitis5, hepatitis6 and various forms of damage to the gut such as bleeding and perforation.

HHV-6 and 7 can be dealt with together as they cause much the same form of illness. Together, they are responsible for many cases of fever in children under the age of two years. The disease the viruses cause is known by a variety of names:

The rash may easily be confused with that of measles or rubella, with the distinction being made according to the preceding symptoms. The high fever caused by HHV-6 and 7 may in some cases reach 40°C, and may cause febrile seizures in some infants. Febrile seizures occur because infants have a low threshold for fitting when overheated, and may be avoided by keeping the child cool and treating the fever with paracetamol.

HHV-8 is also known as Kaposi's Sarcoma-Associated Herpesvirus, as it is responsible for Kaposi's sarcoma, a tumour of the lining of blood and lymph vessels now associated with HIV infection. Though it commonly appears on the skin, Kaposi's sarcoma may also affect many parts of the body including the mouth, airways and gut, especially in individuals with HIV. The virus was originally described by the Hungarian dermatologist Moritz Kaposi in 1872, and was then known as a cause of tumours in elderly European men. This form is now referred to as 'classic KS', as another variety referred to as 'endemic KS' was later found to be widespread in sub-Saharan Africa. However, neither of these forms were related to HIV; the first instances of AIDS-related Kaposi's sarcoma were found in 1981, and are caused by an unusual form of HHV-8. The virus is also known to cause primary effusion lymphoma, a cancer of white cells within the lymph nodes, and Castleman's disease, a very rare condition causing the growth of benign tumours in the lymph nodes.

As well as being liable to cause problems in individuals with a compromised immune system, some of the human herpes viruses have been linked with various forms of immune disease. As mentioned, both of the gamma herpes viruses (EBV and HHV-8) can trigger lymphoma – interestingly, both viruses prefer to infect a certain type of immune cell, namely B lymphocytes. HHV-6 may also have a role in facilitating the development of Kaposi's sarcoma in individuals infected with HHV-6 and 8, and studies have suggested that the virus may be involved in other forms of cancer.

Meanwhile, several of the human herpes viruses appear to be linked to multiple sclerosis (MS), a condition that causes damage to nerves in the brain and spinal cord and is currently thought to be related to overactivity of the immune system. Active HHV-6 infection has been found in the affected brain tissue of individuals with MS, suggesting the virus may in some way be responsible for the damage the condition causes. Curiously, while EBV may also increase the risk of developing MS, CMV has been linked with a better prognosis in those who have already developed the disease. On the other hand, no link with MS has been proven for VZV and HHV-7. Finally, herpes simplex type 1 has been shown to be active in individuals suffering from a relapse of MS, suggesting that the virus may have some role in triggering deteriorations.