The Bank of Mum and Dad Content from the guide to life, the universe and everything 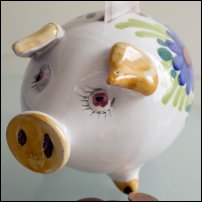 The recession has hit young people hard. The BBC reported in April 2009 that, despite impressions that bankers and estate agents were hardest hit, the worst affected are vulnerable young people. Young workers are struggling to find jobs and, in the most deprived parts of the country, one in every five or six is claiming Job Seeker's Allowance. It is not just the less skilled who are affected either; those graduating in the summer of 2009 are facing a tough time too.

At the same time, many of their generation have grown up with high levels of personal debt. Credit card and loan debt is now thought to amount to around £23,000 for every adult and child in the UK. Chris Tapp from the charity Credit Action is reported as saying 'We grow up expecting to get a credit card or store card at the age of 18. It's almost become a right'. Young people are often vulnerable to debt because they are unaware of the interest rates on credit and store cards.

Students in England and Wales already face the prospect of paying for tuition fees and repaying loans and are increasingly worried about their finances. A survey of 1,000 young people by the UK Youth Parliament showed that 64% feared that the downturn would have a negative impact on students, including less money from their families, loss of parents' jobs and fewer oportunities for working during term time. National Union of Students president Wes Streeting said 'It is clearly an extremely worrying time for all students, particularly with top-up fees leaving them in record levels of debt'.

Turning to Mum and Dad

Although many young people turn to their parents for help, how wise is it to act as the 'bank of Mum and Dad'? According to the Guardian, the insurance and financial services company Scottish Widows reported that millions of parents have been pushed into debt or had to cut back on savings because they have continued to fund their adult children.

Scottish Widows found that more than half the 20.7m Britons with children over 16 have given or loaned them an average of £11,776. Of these, half expect to hand over another £12,564. Of the parents surveyed, 38% gave or loaned money to help their offspring pay off their own debts. 35% gave money towards the purchase of a car, while 30% helped with buying or finding a deposit for a home. Scottish Widows reported that most of the parents lending money had drawn on savings and investments but one in six (nearly 2m people) had increased their own levels of debt. Gordon Greig, head of savings and investment at Scottish Widows, said 'When times are as tough as they currently are, this is the last extra burden parents need. Whilst some parents have prepared for this financial handout, there are some who won't be in a position to replace these savings'.

A small proportion of parents questioned (5%) had re-mortgaged their own property to help their offspring. This is clearly unwise, as failure to meet mortgage payments can lead to home owners being evicted. The Citizens Advice Bureau points out that, where a home owner has arrears on a second mortgage or other secured loans, the lender will usually try to get possession of the property and sell it in order to pay back the loan. People in this position should seek specialist advice by, for example, asking at their local CAB.

It is more common for adult children to give up buying or renting their own properties and to return to live with their parents. The BBC quoted the annual Social Trends survey as saying that 1.8 million men between 20 and 34 (almost a third) and 1.1 million women in the same age range (a fifth) live with their parents. The figures are rising - up by about 300,000 between 2001 and the second quarter of 2008. The Office of National Statistics suggested that the increase might be due to high property prices, unemployment and people deciding to continue their studies.

Students are having to think carefully about leaving home to go to university. The UK Youth Parliament survey found that 36% of students thought that the recession would affect their choice of university or courses. Many would opt for cheaper courses or a local university. Students currently at university are worrying about being unable to get a job when they graduate, a worry compounded by the prospect of paying off the debts that they have accumulated. The National Union of Students found that one in three students are now 'more likely' to seek to stay in education in postgraduate courses.

Although many parents enjoy having their offspring living with them, there can be friction. Young people resent their loss of independence, while parents may feel that their offspring should be contributing more to the household budget. This is particularly likely to be the case where young people have lost their jobs or owe their parents money.

Parents need also to be aware that funding their offspring may lead to a reduction of their own income in retirement. As people live longer and spend more years in retirement, it is important that they have adequate incomes in old age. Yet the recession has severely damaged the value of private pension savings. Parents helping their offspring may be dipping deeply into the money they need to provide for their own old age.

Rather than baling their sons and daughters out, parents would be well advised to urge them to face up to their debts. Too many people let their debts pile up to a level which makes them difficult to deal with. The Citizens Advice Bureau points out that ignoring the problem of debt only makes it worse. There are organisations which offer free and independent advice such as Citizens Advice, Shelter, National Debtline and the Consumer Credit Counselling Service.