Pick-n-Mix Sweets in the UK Content from the guide to life, the universe and everything 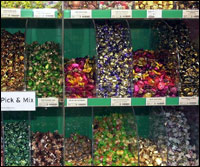 Arguably never has there been a more obvious justification of man's place as the most intelligent life form yet known to exist, than the invention of pick-n-mix sweets. This one concept has brought joy and excitement to millions of people, and is a shining example of democracy and freedom at work.

The Concept and Culture

The fundamental truth behind pick-n-mix is the right to choose. Before pick-n-mix was invented, a person would walk into a sweet shop and have to buy a whole bag of the same kind of sweets. With pick-n-mix, the person can buy the exact amount and type of sweets that they want and have them put altogether in one bag. This then allows them to experience a multitude of taste sensations, in any order, and in any combination.

Yet, it can be argued that nothing typifies modern British culture more than pick-n-mix. Since the liberation of the 1960s the demand for choice has spread throughout all walks of life and through all social barriers. This has resulted in pick-n-mix being found in a wide range of places, and in almost all aspects of British life. When the multiplex cinemas first began to appear in Britain and started to sell sweets, pick-n-mix was quickly adopted. The variety and attention grabbing ability of pick-n-mix mirrored the modern cinema experience, and is the reason why they have surpassed popcorn and ice cream as the perfect complement to a night out at the local cinema. In supermarkets and motorway service-stations the need for consumer choice and freedom of consumption has led them to sell everything from CDs to insurance, and now whole aisles are dedicated to pick-n-mix sweets. This has all bred more and more new kinds of sweets.

The problem is that the commercialisation of British culture has now left the consumer wanting something with much more substance. Modern trends suggest that this is mirrored in the customer's view of pick-n-mix. The desire for quality as well as choice may mean the withdrawal of the new kinds of sweets and a concentration on the classics. Whatever the future, pick-n-mix will be there as the shining example of British culture.

There are three ways to buy pick-n-mix. They are all simple and straightforward, dependant only on where you go to buy your sweeties. Here is a brief description of each along with some of the secrets that can be used for getting the most out of the experience.

The most common of all methods, which will certainly be found in the more commercial confectionery outlets. Here, the person will be issued with a bag, normally a paper one, and will find themselves in front of shelves containing the multitude of sweets on offer. It is then up to the person to fill their bag with the quantities and types of sweets they desire. This may involve using a plastic scoop or tongs, but that depends on the hygiene standards maintained by the shop. Upon completion, they then take their bag to the pick-n-mix helper (recognisable as a scary old lady or bored student), who then weighs the bag and charges the person accordingly.

The secret to this method is to constantly think 'weight' when you are making your choices. The chocolate brazil nuts and toffees may look tempting, but they will break the bank if you get too many. Instead, try combining them with the lighter sweets, such as marshmallows or gummies. Also remember that chocolate in bulk is surprising heavy; try going for chocolate covered raisins or chocolate fudge to give you that cocoa fix.

This is a similar method to the previous one, although it is not as widespread and has very different implications. In this method the process is exactly the same, but the price is determined solely on the size of the container used. This means that you are only limited by the amount you can squeeze into the container.

The secret here, therefore, is to think about 'size' when you are choosing, as well as the order you put things into your container. Here you should limit the bulky items, such as fudge and marshmallows, and then use smaller items to fill in the gaps between them. Perfect for this job are heavy Jellybeans and chocolate peanuts, which you can now employ in large numbers.

This is an old and rare method which is mainly found in the classic sweet shops that are slowly dying away. Not the most beneficial method, but one that has a large nostalgic following (the phrase 'penny-sweet' stems from this method). It is very different and is based on the idea is that each type of sweet has a set value associated with it (although this is generally uniform across almost all types of sweets), and likewise the container has a total price associated to it. The person then has to go to a counter and get a container filled with the combination of their choice by the pick-n-mix helper. This method deeply involves extensive communication with the pick-n-mix helper, who has to know the prices, keep a running total and speed the process along. Still, this is a very communal experience and is enjoyed by all.

The secret to this process is that you have to approach the counter with a gameplan in your mind. It is no good making your decisions when you're being served, as it involves a lot of mental arithmetic. In the end you'll get confused and end up forgetting half the things you wanted. Instead take a step back, consider and decide the sweets you truly desire. Think about how many you can afford to buy, and then make up the gap with on-the-spot choices. No specific sweets are better than others in this method, it is all down your preferences and how much the shop charges for each sweet.

Some types of sweets have already been mentioned, and their merits in certain situations have been discussed. Here is a more detailed list of some of the common varieties found in the pick-n-mix shelves and their attributes.

Consists of whole nuts and raisins covered with either white, milk or dark chocolate, and with a glossy finish. The nuts are normally restricted to the peanut, brazil, hazelnut or almond.

Multiple shapes (normally bears, babies and worms) formed out of gummy jelly, and in a variety of flavours. Sometimes covered in sugar.

Coke bottle-shaped jelly, with a two-toned colouring effect (clear and brown). Coke-flavoured, and sometimes covered in sugar for a hardcore zingy experience.

Shaped nougat foam, flavoured either strawberry for the shrimps and banana for the bananas (duh!).

Liquorice-based sweets, with a variety of additional toppings and flavours. Normally cylindrical or cube-shaped.

Pieces of marshmallow that come in a huge amount of shapes and flavours. Popular shapes include cubes and twisted rope.

Soft jelly, covered in a sugar-based shell, and shaped like a bean. Come in an extremely wide range of flavours.

Honeycomb, broken up into chunks and covered in milk chocolate.

Sugar chews, wrapped and in a wide range of flavours. Typical flavours include fruit, vanilla and liquorice.

A ball or cubed-shaped sweet, mounted on a paper or plastic stick. Typical types include chew, boiled sugar or with a chalky texture, all coming in many different flavours.