'This Life' - the TV Show Content from the guide to life, the universe and everything 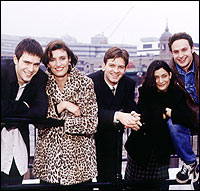 This Life was what is occasionally termed a cult success. However, it was more than that; it was a commentary on late 1990s life in London.

The first episode began with the words, 'Out there is chaos', which was spoken by Warren to his therapist. This scene would be used to link the show's many story lines and it certainly was an accurate description.

This Life was a drama based around a four-bedroom house in Southwark, London. As the series opened, three recently qualified lawyers - Egg, his girlfriend Milly and Miles - were sharing this house. Anna and Warren would soon join them. All five worked at one of two law firms although Egg was to leave law very early as he couldn't stand it. Several other characters, who would share the work place or private lives of the main characters, added plenty of variety and plot twists.

The first series of 11 episodes was shown in 1996, while the second series of 21 shows was screened twice weekly in 1997. Both series were repeated in the summer of 2000.

This Life was a groundbreaking television series. Both series were filmed in the increasingly trendy style of the late 1990s, which was made popular by US shows such as NYPD Blue and was tried less successfully in The Bill and later in The Cops (by the same team that produced This Life). The style was recognisable by multiple camera cuts, very unstable and jerky movements and exceptionally tight editing. Every word in every scene was just the minimum needed to move the plot. It was left up to the viewer to fill in the gaps.

For its time, the show had a fresh and radical approach to life. It showed life for what it was and included sexually explicit scenes, violence, drug taking and drunkenness, all of which were portrayed realistically. Perhaps the biggest shock to those who believed the show marked the end of civilization was the explicit scenes of gay sex. From the very start, gay characters, first Warren then Ferdy and Lenny, and then finally, however briefly, Warren again, played key roles in the show. Along with an attempted lesbian seduction of Anna, homosexuality was portrayed as a normal part of life. However, it didn't hide the bigotry and fear still felt in the 1990s.

Press coverage was, at times, less than favourable:

... appalled at the drugs, booze and, worst of all, simulated sex between homosexuals.
- Daily Mail

The frequent cut scenes of key characters unloading their troubles to an unseen therapist aided the storylines. This device allowed the viewer to see and hear what the characters were really feeling.

All the characters were well thought out, fully dimensional people. This was not Friends set in the UK. None of these people were perfect and many were very messed up. That did not stop the show being both hilariously funny and thought-provokingly sad.

The first series was a quiet success whereas the second series was hyped and drew bigger audiences. When it ended its viewing figures were over four million. When the second series ended everyone thought a third was a certainty. Alas, it was not to be. Various reasons were given, the most convincing was simply that the production company didn't believe they could top the second series; they had done everything they wanted to do with the characters and wanted to go out on a high. This is certainly what happened. The British viewing public are still waiting for something to come close to This Life again.

The final scene in the final episode saw the return of Warren from his world travels to say just one word as he viewed the carnage that was the final episode ('Apocalypse Wow'), and with this word, he also summarizes the run of the show: 'Outstanding.'