@ - A History Content from the guide to life, the universe and everything 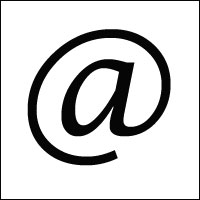 The @ symbol has become the emblem of an age. Not only is it the fulcrum of every Internet email address, but also it has been widely co-opted to add the 'Net flavour' to almost any name or trademark. Who would suspect that @ is more than half a millennium old?

Britain's The Guardian newspaper recently reported research by Italian academic Giorgio Stabile indicating that @ was created as an indication of weight or volume.

Stabile says that the first known incidence of its use is in a letter written by the Florentine merchant Francesco Lapi on 4 May, 1536. Sent from Seville to Rome, the letter describes the arrival of three ships bearing goods from South America.

In it, the @ sign represents an amphora, a measure of capacity based on the terracotta jars used to transport grain and liquid in the ancient Mediterranean world.

The distinctive loop of the tail of the 'a' is, says Stabile, typical of the mercantile script developed by Italian traders between the Middle Ages and the Renaissance.

Stabile believes that the symbol filtered up the trade routes to northern Europe where accountants began using it as shorthand for 'at the price of'.

It was this application that allowed @ to creep onto the keyboards of typewriters in the early 20th Century and, later, onto keyboards connected to the computers of the 1950s and 1960s. However, given that most of us are not accountants, it languished.

The relative lack of use of the @ symbol in day-to-day communication was a factor for Ray Tomlinson, an American engineer who is one of a select group of men who created what we now know as the Internet.

In March 1972, three years into the life of the first incarnation of the Internet, ARPAnet, Tomlinson completed the email software, which he had designed to allow ARPAnet developers to easily communicate with each other. The move to the use of the network for personal use rather than data transfer or remote computing changed the world we live in.

In defining the way the email software would work, Tomlinson had to pick a character to stand between the user name to the left of an email address and the domain information to the right. He has since explained that he chose @ because it wouldn't be found in a person's name. As the symbol became ubiquitous in the 1990s, its look - in unconscious emulation of that old mercantile script - was even applied to other characters. IBM adopted an 'e' wrapped in its own tall as the brand for its e-business products. Proposed legal action by a hitherto unknown company called E Technologies, which claimed to have begun using the encircled 'e' in April 1997, four months before IBM, fizzled out.

Stabile told The Guardian that the 16th Century merchants of the Mediterranean would have considered the modern use of the symbol to be highly appropriate, saying:

No symbol is born of chance, this one has represented the entire history of navigation on the oceans and has come to typify travel in cyberspace.

The professor suspects that even older instances of the symbol's use may be lurking in the archives of Italian banks. He urged the most venerable banks to start looking, pointing that 'the oldest example could be of great value. It could be used for publicity purposes and to enhance prestige of the institution that owned it'.

Yet if the Italian coinage has become a key part of the Anglophone world of the Internet, we speakers and writers of English have failed to come up with a decent name for it. Its formal identity as 'commercial at' is hardly inspiring.

The Spanish have long had a word for it - arroba, which in the 16th Century indicated a weight or measure equivalent to 11.3kg (25 pounds) or 22.7 litres (six gallons). Modern Italian Internet users refer to the symbol as la chiocciola - the snail, used frequently around the world.

Names other Countries Use to Desribe @