Lake Garda, Italy Content from the guide to life, the universe and everything 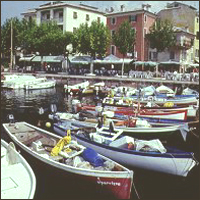 Found in the north east of Italy in the triangle formed by Brescia, Verona and Trento, Lake Garda is undoubtedly a beautiful place.

Approached from the plains of the south, Lake Garda is described as the last Mediterranean-like water before the Alps. Formed by glacial movements it is found between the steeply climbing slopes of the Dolomites. Roughly triangular in shape, the narrow fjord-like top section of the lake points north-north-east while, as you move further south, the lake becomes more shallow and broadens greatly.

The town of Garda (after which the lake takes its name) lies at the south-eastern edge of the lake which is closest to the city of Verona. At the northern tip lies Riva del Garda, a very pretty town centred on an ancient port.

Politically the lake has had a chequered history. Limone sul Garda, a small town, a little below Riva on the western side of the lake, is said to be named after either the lemon groves which were found there in the past or for the Austrian term for border, as Limone once marked the edge of the Austrian-held territory.

The Venetians burnt and sank a significant sized vessel in the lake to thwart attacks through the valley. In the 1950s divers undertook to investigate the wreck and several artifacts were recovered, which are to be seen in the museum at Malcesine on the eastern coast of the lake, roughly opposite Limone. The museum is situated in the castle, which towers above the town and is built on the very edge of the lake.

It has to be remembered that the roads on which tourists approach the lake are comparatively recent and previously access to and around the lake was over the mountains or by boat. The roads, especially on the eastern side of the lake, date from the 1930s onwards.

What a modern tourist soon notices is the number of cyclists there are on the roads. Generally wrapped in garishly coloured skin-tight clothing with metallic painted helmets they whizz up and down the mountain roads and through the marvellous tunnels carved into the mountainside. The locals have a healthy respect for these sporting types and are generous in their passing widths when overtaking - even in the tunnels, which can be disconcerting if you are travelling in the opposite direction in the confined tube.

Water sports abound on the lake which has several centres for hiring boats, wind surfers or other appropriate gear. Just a short distance away are the skiing resorts of the Dolomites, so many tastes can be catered for depending on the season.

Local food has a leaning towards freshwater fish from the lake itself. The lake is surrounded by pleasant hotels and eateries and several of the towns or villages have their own markets on set days of the week.

Ferries operate from several points and provide a comparatively quick way of getting across. Hydrofoils travel very quickly and can be used for the longer lake journeys (bottom to top or vice versa). Mainly they are pedestrian only but there are a couple which can take vehicles.

If you have hired a car for your stay it is worth leaving the main roads, which do get you places much faster, and heading directly for the lake. The slower winding journey is rewarded with breathtaking views of the lake, the castles, the mountains and the pretty villages. You can also stop wherever you wish to take a cappuccino and ice cream and indulge yourself.

One tip for the British motorist: don't be too alarmed if a driver behind gets so close you can count his nostril hairs. This is not meant to intimidate you but to reduce the actual distance he will have to be in the oncoming lane when he overtakes. Generally motorists leave ample room between vehicles - perhaps even more than would be normal in the UK, so that overtaking vehicles can pop back into lane at a moment's notice if a vehicle suddenly appears in the opposite lane.

Petrol stations in this part of Italy have a common theme of not being staffed. Italians carry 5 and 10 euro notes on them which can be fed directly into a cash machine. Once this has accepted the note you can choose your pump number and start to fill your car. Once the machine has issued 5 or 10 euros worth of petrol it turns itself off.

For public transport links this is the place to be if you want to travel to and from the lake by train to Verona. It has the lake's main harbour and boat services operate to several other resorts.

If you have a taste for the unusual go to Gardone Riviera on the lake's western shores. Here you will find a peculiar little Botanical Garden which was created in the early part of the 20th Century but which has more recently been bought by the artist Signor Hruska. Modern works of art placed in the gardens are a pleasant surprise for visitors. Five minutes' walk away is an Italian national treasure, Vittoriale, the villa and gardens of the noted Italian poet and political thinker, Gabriele d'Annunzio. Sticking straight out from the mountain side is the front end of a battle ship, constructed to be a monument to people who had died in the service of their country. There is an amphitheatre, a mausoleum and other fascinating attractions in this place, which sadly has Fascist connections and an ongoing attraction for Italian nationalism.

Situated a pleasant lakeside walk south of Garda is the popular resort town of Bardolino, famous for its red wine. It boasts an attractive piazza and a number of ancient churches, including the 12th Century Romanesque church of San Severo.

A couple of miles further south is Lazise (it almost rhymes with 'that's easy'), another pleasant town dominated by its castellated mediaeval walls. These and many of the buildings date from when the town was ruled by Venice in the 14th Century.

Midway along the broad southern shore is Sirmione. It is situated on a narrow peninsula which juts northwards into the lake. There is a castle at the very tip of the peninsula which is a very popular and picturesque resort.

A boat trip north of Garda is Malcesine (pronounced 'mal-CHEZ-nay'), one of the most picturesque views, as the buildings cluster around the lower slopes of Mount Baldo. The poet Goethe was sketching the castle here in 1786 during his famous Italian journey, when he was arrested and detained as a German spy.

For an even more stunning experience, take the cable-car up through the terracotta rooftops to the top of the mountain and enjoy the panoramic view across the entire lake.

One final travel tip: English speakers may find that they come at least third in the pecking order. Italian and German vie for top spot, with huge numbers of German tourists enjoying lakeside holidays. In many places signs and information are in Italian and German and there is no English equivalent. Many of the local people know enough English to allow you to buy their goods but conversations outside of how many coffees or what toppings on the pizza should best be carried out in Italian.