Portlaoise, County Laois, Ireland Content from the guide to life, the universe and everything 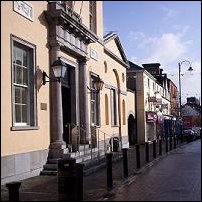 Founded in 1548 and located some fifty miles south-west of Dublin, the Irish Midlands town of Portlaoise (pronounced Port-leash) owes its existence to the suppression of one of many Irish rebellions against the English. In 1547 the two families who controlled the land in this part of Ireland (the O'Moores and the O'Connors) were routed, and the English established a fort to enforce their supremacy and protect the southern flank of the Pale (the English occupied area around Dublin). Initially the fort went through a number of name changes, but in 1556 the whole county was planted with English settlers and named Queen's County - with the fort named Maryborough, after Queen Mary. The neighbouring county, Offaly, the former stronghold of the O'Connors, became King's County. The name was returned to Portlaoise1 in 1922 following the granting of independence to the Republic.

At the beginning of the 21st Century the population of Portlaoise has grown enormously, with new housing developments around the outskirts. In 2002 the population of the town and its immediate environs was 17,000 people, and by 2006 it had grown to 22,000 - whereas in 1991 it was 9,0002. Much of this increase is made up of people who have moved out of Dublin and commute daily to that city (approximately an hour by road or rail). A significant number of the newcomers are 'non-nationals' from Eastern Europe, Africa and Asia, and the town made international headlines in 2007 when the council selected as mayor a former asylum-seeker from Nigeria.

The former Maryborough Gaol is now home to the Dunamaise Theatre and Art Centre where music, dance and drama performances are held a two-three times a week. This building also contains an Art Gallery and Internet Café. There is a multi-screen cinema showing all the latest releases, but Dunamaise Theatre has screenings of 'Art House' films.

Several of the town centre pubs hold live music sessions, especially at weekends. There are four main hotels, and several B&B establishments. There are also numerous restaurants (not all of them associated with the pubs), including several Chinese, Indian, Thai and Italian, as well as those serving traditional Irish food.

Portlaise also has plenty to offer for those interested in seeing some of the heritage of the town and region. There is the Portlaoise Heritage Trail, and parts of the original fort can still be seen in the centre of the town. Most of the other buildings date from the Georgian period, or later.

There are several modern shopping centres, as well as the main town centre. Many of the businesses in these belong to chains that will be familiar to UK shoppers. There is a library, cinema, courthouse and arts centre. Adjacent to Aras an Chontai (County Hall) is a newly developed town plaza with trees and fountains. Nearby is a statue of James Fintan Lalor (see below).

The town is home to O'Moore Park, Ireland's second national Gaelic Athletic Association stadium. There is also a modern leisure centre, and both football and rugby clubs. For golfers, the Portlaoise Golf Club offers a challenge too. Portlaoise is bisected by the Triogue River which flows from south-west to north-east, and alongside the river are two parks; the 'People's Park' south-west of the town centre, and the Triogue River Park to the north-east.

There are two hospitals, St Fintan's and the Midland Regional Hospital (the latter should not be construed as meaning the only Midland Regional Hospital, as there are others so named at Tullamore and Mullingar). St Fintan's was originally an asylum for the insane, and once housed up to 800 patients. It still has a small number of patients with mental health problems, but most of the building is occupied by various clinics and social welfare offices, including the registry office.

It's difficult to say precisely how many primary schools there are as any official listing for Portlaoise also includes some of the outlying villages. There are at least six, two secondary schools and also a newly built Further Education College. There are Roman Catholic, Church of Ireland and Methodist Churches as well as a Kingdom Hall of Jehovah's Witnesses, and a place where Muslims meet for worship in the town. In 2008 the Roman Catholic church of St Peter & Paul underwent extensive renovation, so services were held in the gymnasium at the college.

The main source of employment for in the town is the two prisons, Portlaoise Prison and the Midlands Regional Prison. The prison service also has its principle training establishment there. Portlaoise lies at an important transport intersection too, where the main roads from Dublin to Limerick and Cork diverge. Recent attempts at increasing local employment opportunities have centred on the development of the town as a transport interchange or inland port. A new rail coach repair works was opened in early 2008, and this complements railway sleeper manufacture which has been ongoing for some years - but has been reduced as the national programme to upgrade the rail system came to a halt.

The town is the administrative centre of County Laois, another major employer housed in a modern office complex, and (like much of Ireland) large areas of the surrounding countryside are peat bog, so the national processor and marketer of peat products, Bord na Mona, is another important employer. Farmland is mostly livestock, with any crops grown as animal feed for own use. There are also a large number of timber plantations with saw mills located on the outskirts of Portlaoise, and in nearby Mountrath too.

There are few points within the town where it is not possible to see either the Slieve Bloom Mountains, which rise to the north-west, or the Dysart Hills to the south. About four miles to the south of the town is the Rock of Dunamaise too, an important heritage site with evidence of Viking, Norman and earlier occupations.

1The original Gaelic being Portlaoighise.2Irish Census.