Schloss Benrath, Duesseldorf, Germany Content from the guide to life, the universe and everything 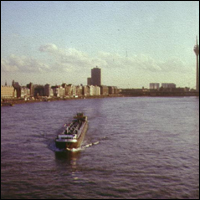 Schloss Benrath (Benrath Palace) is situated within its own parkland in the south of Düsseldorf, North Rhine-Westphalia, Germany.

Not only is it historically and horticulturally significant, but it plays a part in the everyday life of local citizens. Here they can take a stroll and chill out in the fresh air. They can visit the grounds with their children, and relax from the stress of their working lives and everyday problems.

In 1756, the Elector Carl Theodor visited his residence in Benrath. Realising that the old palace was damaged beyond restoration, he instructed the architect Nicolas de Pigage to build a new one. The only part of the original building to remain was the Orangery, in which today you will find a public library and exhibition space.

The building works were unfortunately interrupted by the Seven Years War, but by 1760, the interior decorating was underway: the works included a stuccoed ceiling and sculptures in the elector's wife's bedroom. The outbuildings and the gate lodges were constructed, then the stuccoed ceilings in the main room were finished. The building was completed in 1773.

What is most remarkable is the adjoining park - a hunting ground, but one which was planted with some lovely flower gardens as well as a kitchen garden. There are also ponds; the small River Itter flows through the grounds.

In 1795, the palace was damaged and pillaged by French troops, after they had conquered the dukedom. Four years later, Carl Theodor died in Munich. His successor, Elector Maximilian IV Joseph of Bavaria, left the dukedom of Berg to his brother in law, Duke Wilhelm. The duke and his family became the first permanent residents of Benrath Palace.

Following the downfall of Napoleon I, the Vienna Congress of 1815 distributed his conquered territories, and Benrath came into the possession of the Prussian crown. In 1820, King Friedrich Wilhelm III visited the palace and from 1821 to 1848 his nephew, Prince Friedrich Ludwig of Prussia, commanded the 20th Prussian Division at Düsseldorf. He and his wife, Princess Wilhelmine Luise, used Benrath Palace as their summer residence.

In the following decades a succession of dukes and princes spent time here. Even the first German Emperor, Wilhelm I, paid a visit.

In 1911, the borough of Benrath purchased the palace buildings and grounds; the contract included their obligation to tend it. The palace became a place for excursions, holding regular guided tours. The west wing was used initially for flats, and later as a fire department; the east wing was occupied by a boys' school.

After the borough of Benrath had become incorporated into Düsseldorf's suburbs in 1929, the city took the palace into its possession.

During World War II, the palace was bombed, but was later restored. Since 1952, the palace has hosted politicians and dignitaries visiting the North Rhine-Westphalia region.

In 1965, the restoration of the west wing began, and later the Natural History and Local History Museum was opened here.

In 1980, the school had outgrown the east wing, and moved out. The Rettet Torhaus und Ostflügel von Schloss Benrath1 society was founded to oversee its restoration. These premises now house a café and the Museum of European Garden History. The former orchard with fruit trees has been reinstated on the east side.

The architect, Nicolas de Pigage, preferred the late baroque style, but he also was fond of modern architecture. He built what was to become a perfect combination of a hunting palace with a garden palace, in the style of the French maison de plaisance country house. He put a great effort into the composition of the different buildings: the main corps de logis, flanked by the east and west wings. He used stuccoes and sculptures to emphasize the effect of a place of pleasure.

What is also remarkable is the illusion that from the outside you think the palace has two storeys, but in fact it has four. In addition, everything is symmetrical.

The park displays a variety of scenarios, composed in a very harmonic way. At the front of the palace is a round pond. To the rear is the Spiegelweiher, the rectangular 'mirror pond' which really reflects the palace. A third pond within the park invites visitors to sit and rest.

Visually, the main house forms the highest point and the centre at which all the axes of the garden meet. These axes divide the garden into its smaller parts, including the English garden, the 'Trompet' (a trumpet-shaped pond) and the kitchen garden.

In 2000, The Benrath Palace and Park Foundation2 was formed to maintain and preserve the palace, and from 2004, this also included the park.

In the beginning of the 21st Century, the Euroga, a European garden exhibition, took place in Düsseldorf, and Benrath was part of it. Some of the older gardens were restored, including the vegetable garden and the electresses' flower garden.

You can often find newlyweds having their pictures taken at Benrath - who wouldn’t want to have a photo in their bridal gown in front of a beautiful palace?

When you want a lovely afternoon out in Düsseldorf, you should visit the palace and its park, then take a stroll in Benrath village centre nearby.

How to get there

From the airport: take the train S7 or S1 (depending on your air terminal) to the Main Station, then:

From the Main Station: take the S6, RE 5 or RE 6 train, to Benrath S-Bahnhof.

From Jan-Wellem-Platz (near the Altstadt): take tram 701 to Benrath, stop Schloss Benrath.

Winter months:
1 November to 15 April,
Tuesday to Sunday, 11am to 5pm
(closed Monday)

The Museum of European Garden History is equipped with a toilet for the disabled as well as a lift.

For more information, have a look at the Schloss Benrath website.

1The society to restore the east wing and gatehouse of Benrath Palace.2Or to give it its proper name, the Stiftung Schloss und Park Benrath.