Lancaster City Football Club Content from the guide to life, the universe and everything 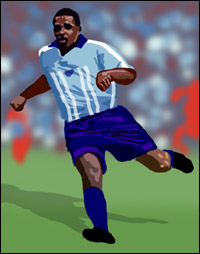 Lancaster - a historic British city famous for its castle, its battles, its Royal Grammar School and more recently populated by a large number of students at its university - has never been the site of great sporting achievement. Other Lancashire towns such as Blackpool and Preston had great footballing success during the early and mid-20th Century, as did Blackburn Rovers towards the end of the century, but the tale of Lancaster's club is one of persistent strugglers never to enter the Football League, never mind win any major trophies.

The club now known as Lancaster City started its existence as the Lancaster Athletic Football Club, formed in 1905. This initial incarnation was greatly unsuccessful, and the club folded in 1911 after just six years in the Second Division of the Lancashire Combination. At this point the club immediately reformed under the name of Lancaster Town FC and, after a year in the West Lancs League, they returned to the Second Division of the Combination, achieving greater success this time. They achieved a swift promotion to the First Division in 1915 as the finishing touch to a season when the club recorded its record victory by beating Appleby 17-2 in the FA Cup preliminary round.

All competitive football was then abandoned until 1919 due to World War I, but on the return, Lancaster finished second in the 1919 - 20 season and then fifth the following season. It was at this point that the club's ambitions suffered a massive setback when they were refused admission to the new Third Division (North) of the Football League. Had the club entered the league, their standing today may have been very different. Town did take advantage of the absence of the clubs who had been elected to the league by winning the Combination for the first time in 1921 - 22, and then again in 1929-30. They also went on an FA Cup run in 1921 - 22 which saw them beat Third Division (North) clubs Stockport and Barrow.

In the 1930s, Town won two more Combination titles, and managed to attract regular crowds of around 3,000 - equal to many league clubs at the time. This period of success in the 1920s and 1930s was built on some of the clubs best ever players, players such as Harry Abbott, Fred Johnson, 'Derby' Wilson, Richard Bond, Joe Hodkinson, Anthony Alstead, Ellis Fisher, Fred Marquis and Joe Myerscough.

The town of Lancaster was granted its City Charter in 1937, one of the cities to be granted the charter as part of King George VI's coronation celebrations. As the town became a City, the club was appropriately renamed. However, despite the city's new status, the football club failed to improve. The combination title would never return to the club, and the club's last FA Cup run of substance for some time was 1946/47's second round appearance.

From the 1960s to the present day, non-league football has been in something of a state of flux, new leagues and divisions being created on a fairly regular basis. This restructuring helped Lancaster City to get into leagues featuring teams from a wider geographical area than previously, due to their presence in the Northern Premier League from the 1970 - 71 season. In 1976 - 77 the club managed a seventh-place finish, but that would prove their best, and in 1982 they dropped down to the North West Counties league due to financial difficulties. In 1987 the club shifted again due to more restructuring, as the creation of the Northern premier League First Division gave them a new league to play in. By the mid 1990s, the club had the hang of the now sponsored Unibond League, winning the 1994/95 and 1995/96 League President's Cups. The 1995/96 season also saw the club win the First Division Championship to make it into the Unibond League Premier Division.

Upgraded facilities at the club's Giant Axe ground accompanied the increasing success as Lancaster consolidated their Premier Division status with some solid mid-table finishes followed by Sixth, Fourth and Third place finishes in consecutive seasons from 1999 - 2002. An eighth-place finish in 2003/4 saw the club secure a place in yet another of non-league football's new creations.

Created at the beginning of the 2004/05 season as an extra stepping stone between the Football Conference and the three regional leagues for North, South and Midlands, the Football Conference North/South split the top teams from the three regional leagues into two regional divisions which function as the sixth level of English football. Lancaster City was an inaugural member of the Conference North, securing 13th place out of 22 teams in its first season. Under the management of former Southport boss Phil Wilson, and with talented players such as ex-Morecambe men Neil Uberschar and Ryan-Zico Black, as well as club legend Peter Thomson, the only player ever to leave Lancaster for a transfer to a top Dutch side1 there is confidence that Lancaster can make a push for the Conference in the near future.

Northern Irish frontman Ryan-Zico Black isn't the only eccentric name connected to Lancaster- the stadium and the club nickname are a bit bizarre as well.

The club's home ground, Giant Axe, is located just downhill from Lancaster Railway station, and is overlooked by Lancaster Castle and the Priory Church. The reason for the idiosyncratic name is that when the ground was first built it was the centrepiece of a sports club, the exterior wall of which was, when viewed from above, the same shape as an axe head. In those early years, tennis was also played at the ground, and the football pitch was the centrepiece of a huge circle of grass called 'the sixpence' which also featured cricket pitches. The ground has been the club's home since the early days, but was renovated in the 1990s, and now features a stand of modern plastic seating, sponsored by Sportswear company Reebok, who also provide the kits.

The ground is a typical non-league ground - mainly terracing, some seating, cheap but nice food and drinks, and a roll out metal cage for a tunnel. Since the 1990s, the club has also had its own on-site pub, The Dolly Blue Tavern, and a club house attached to it which is used to house some of the players.

Lancaster City's nickname is the Dolly Blues, due to the fact that the colour of their original kits was the same as that of "Dolly Blue" washing tablets.

1The club in question was NAC Breda, who he joined in 1998 and spent eighteen months with. He took something of a circuitous route back to Lancaster, having spells with Bury, Luton, Morecambe and Southport before rolling back at Giant Axe in 2003.