Colin Jackson CBE - British Athlete and Broadcaster Content from the guide to life, the universe and everything 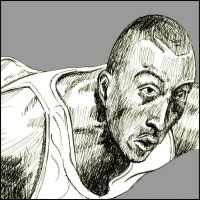 Colin Jackson first came to the attention of the media as a hurdler, with his achievements being noted by many including the Queen, who awarded him a CBE in 2003. He has since remained in the media spotlight mainly thanks to the BBC.

Born on 18 February, 1967, to Jamaican parents, Jackson was raised in Wales with his sister Suzanne1. He attended Llanedeyrn High School in Cardiff and, together with his father, formed a passion for sport. Jackson proved he was good at all sports and played both for his school and county.

I had a natural talent for things like cricket and table tennis; I'm not saying I would have gone on to be record holder or anything but I was naturally good at all sports. What swung it for me was that it was a three-hour trip to get to cricket and just a ten-minute walk to the athletics venue.

However, it was clear Jackson particularly excelled in the area of athletics, especially the 110m hurdles. Therefore he concentrated his efforts on this sport and invested in a personal coach who encouraged him to be the very best.

In 1986 he won his first silver medal at the Commonwealth Games in Edinburgh, and just a year later he won bronze at the Athletics World Championships. Another silver medal followed in 1988 when he took part in the Seoul Olympic Games, and in 1990 he became Commonwealth and European champion.

In 1992, fellow athlete Linford Christie turned to Jackson and asked whether he would like to help put together a company that inspired athletes of the future. Although Jackson was reluctant at first, as it would mean less time to practice hurdling, he finally agreed and Nuff Respect was created. However, Jackson soon came to realise that his views differed to those of Christie, and they quickly found it difficult to work alongside one another.

A Brush With Anorexia

In 1992 the Olympics took place in Barcelona, and Jackson only made a disappointing seventh place in his event. For him, a drastic rethink was in order: whether to carry on as an athlete or not; he chose to continue competing. Jackson found that what he ate, and the amount, could have a distinct effect on him.

I constantly watched what I ate and obsessively monitored my weight and form, in order to make myself faster. Looking back, I know this was not good for me and I can understand how anorexia can happen.

The results of his strictness with himself were reflected in the 1993 World Championships in Stuttgart, where he proved to be a hero of the athletics track once again by setting a new world record of 12.91 seconds for the 110m hurdles. He followed this by setting another record at the indoor games in Sindelfingen in 1994. This time the record he set was 7.30 seconds for the 60m hurdles.

It seemed there was no stopping the Welsh athlete after that, with four gold medals being won consecutively at the European Championships between 1990 and 2002.

Throughout his athletics career it was clear he was focused on his chosen path and nothing could rival that. He spent less time out socialising and partying with his peers than on the track, and because of this he soon found his colleagues starting to suspect he was gay. He told the Independent:

Everybody always thought I was gay because I never played around, and that's very rare in my world because, believe me, everybody else did. Nobody could understand it. Here I was, number-one in the world, in some exotic location. I could have had [girls] flocking to my room. But I never did. I simply wouldn't allow it.

He has had a girlfriend in the past, though, and would love to have a girlfriend who resembled Halle Berry. He told Voice Online:

For now, though, he is still very happy to be single, and is kept busy with a myriad of different things.

Jackson wrote his life story with the assistance of David Conn, and The Autobiography of Colin Jackson was published in September 2003. That same year, Birmingham held the World Indoor Championships and witnessed Jackson hang up his running shoes for the last time before joining the sports section of the BBC. He first commentated on the 2004 Athens Olympics, followed by the Winter Olympics in 2006, Commonwealth Games and European Championships.

In 2006, Jackson acted as development producer to BBC Sport Relief, and went on to compete in the televised dance competition Strictly Come Dancing. He has co-presented the religious belief show Sunday Life with Louise Minchin, and taken part in The One Show.

Jackson has also been seen reminiscing about his past sporting career and questioning what it was that made him a fantastic athlete. Through taking part in programmes like Who do you Think you are? and The Making of me, he discovered his roots, and found out how nature and nurture enabled him to blossom in the arena of athletics. During the making of Who do you Think you are?, he learned that his DNA is 55 per cent Sub-Saharan African, 38 per cent European and 7 per cent Native American ancestry. The Making of me, meanwhile, led him to re-examine his upbringing.

Jackson has also jumped out of an aeroplane and had brain scans, all in the name of science.

Any spare time he has left over is spent as a coach to Welsh sporting heroes of the future and an advocate of the 2012 British Olympic Games.

I took part in four Olympics and, as far as I was concerned, I represented not just Great Britain, but Wales and also Cardiff. That meant a lot to me and I really want to get across the spirit of the Games to people who may be asking what's in it for them. I hope that people all around the UK will be able to share it.