Checkpoint Charlie Content from the guide to life, the universe and everything 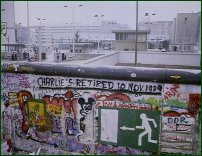 Following World War II, Berlin, the capital city of Germany, was divided into sectors: the British, American and French sectors, which were part of West Germany; and the Soviet sector, which was part of communist East Germany. On 13 August, 1961, the Berlin Wall was built around West Berlin - first as an overnight barricade of barbed wire and roadblocks, and later as a solid wall of reinforced concrete. It divided the city in two, separating families and preventing access by East Berliners to jobs and opportunities in West Berlin.

Following the construction, some travel was still needed between the two parts of Berlin. Crossing points known as checkpoints were created and named in accordance with the NATO phonetic alphabet1: Checkpoint Alpha at Helmstedt; Bravo at Dreilinden; and at Friedrichstrasse in the city centre, the third and most famous - Checkpoint Charlie.

Checkpoint Charlie provided the main crossing point for officials, dignitaries and foreigners between the east and west sides of Berlin. Access to the east part of the city was fairly easy for western diplomats and military personnel, who could not officially be checked under post-war agreements. Foreigners, while often subject to many delays, checks and searches, were also granted access but this was mainly because of the money they brought into East Berlin. West Berliners were not allowed access at all until 1963 and even then there were severe restrictions. A new Traffic Agreement in October 1972 improved the situation somewhat but the new visa application process was far from simple. While access for east Berliners to the west of the city was theoretically possible, it remained for most a very unlikely event.

Checkpoint Charlie consisted of a guardhouse and, after some initial incidents, two strong barriers to prevent any unauthorised crossings by vehicles. There were also two signs (each in four different languages: German, English, Russian and French). On passing from west to east, the sign read:

YOU ARE LEAVING THE AMERICAN SECTOR

On passing from east to west, the sign read:

Many see Checkpoint Charlie as one of the main focal points of tension during the Cold War in Berlin. It was the scene of a stand-off between American and Soviet tanks in October 1961, the site of failed attempts of many would-be escapees and was visited by both Kennedy and Khrushchev. It also achieved infamy through its place in film, such as The Spy Who Came in from the Cold, as well as making appearances in numerous novels (mainly, but not exclusively, spy fiction). The collapse of the Berlin Wall in 1989 only brought with it a temporary end to the usefulness of Checkpoint Charlie.

After the fall of the Berlin Wall, the Checkpoint Charlie guardhouse was moved to the Allied Museum in 1990. In the year 2000 a replica hut and sign were erected on the original site. This is now one of the main staples of a tourist's sightseeing diet in Berlin, and occasionally people are even employed to stand there as mock guards. The replica guardhouse can seem slightly underwhelming out of context, and the many shops are very tourist-orientated. While there are also a large amount of costly cafés in the surrounding area, there is also the more inventively named, and more reasonably priced, 'Checkpoint Curry'. Located near Friedrichstrasse train station it sells traditional German fare including bratwurst, currywurst and pommes (chips).

Next door to the replica Checkpoint Charlie is Haus am Checkpoint Charlie, a privately-owned museum dedicated to the subject. Rather than focus on the historical role of Checkpoint Charlie or the Berlin Wall, the museum concentrates on true-life stories of the separation of friends and family and their eventual reunification. All stories are in German, English, Russian and French.

1The system which uses words to represent the letters of the English alphabet: eg, A - Alpha, B - Bravo, C- Charlie, D - Delta, etc. Originally developed to ensure accurate communication between aircraft and air traffic controllers, it is now used by all radio operators.