'Hang on Sloopy' - The State Rock Song of Ohio Content from the guide to life, the universe and everything 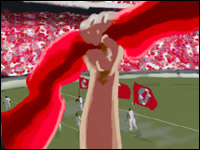 The American song 'Hang on Sloopy' is an interesting one1. It is a rock song from 1965, by a band from Dayton, Ohio called the McCoys. It was one of the number one hits in the US in October of that year. The name 'Sloopy' comes from a singer called Dorothy Sloop, from Steubenville, Ohio, who went by the name of 'Sloopy' onstage in the 1950s.

It doesn't make a whole lot of sense, but it has a terrific feel...the kind of song that gets stuck in your head for days on end. This is certainly one of the hallmarks of a good rock song.

At about the same time as the song's first release, the Ohio State Marching Band performed it at a game against Illinois. Since then, marching bands throughout the state have used the song popularly in high school and college football games. Often, the letters 'O-H-I-O' are added in a pause between 'Hang on Sloopy, Sloopy hang on' and 'Hang on Sloopy, Sloopy hang on'. It's the perfect length for yelling four letters. This has kept it familiar to several generations.

In 1985, a certain generation that had grown up around rock music came to dominate the Ohio Assembly's numbers. They passed the following resolution, designating 'Hang on Sloopy' as the Official State Rock Song of Ohio2-

WHEREAS, The members of the 116th General Assembly of Ohio wish to recognise the rock song "Hang On Sloopy" as the official rock song of the great State of Ohio; and
WHEREAS, In 1965, an Ohio-based rock group known as the McCoys reached the top of the national record charts with "Hang On Sloopy," composed by Bert Russell and Wes Farrell, and that same year, John Tagenhorst, then an arranger for the Ohio State University Marching Band, created the band's now-famous arrangement of "Sloopy," first performed at the Ohio State-Illinois football game on October 9, 1965; and
WHEREAS, Rock music has become an integral part of American culture, having attained a degree of acceptance no one would have thought possible twenty years ago; and
WHEREAS, Adoption of "Hang On Sloopy" as the official rock song of Ohio is in no way intended to supplant "Beautiful Ohio" as the official state song, but would serve as a companion piece to that old chestnut; and
WHEREAS, If fans of jazz, country-and-western, classical, Hawaiian and polka music think those styles also should be recognized by the state, then by golly, they can push their own resolution just like we're doing; and
WHEREAS, "Hang On Sloopy" is of particular relevance to members of the Baby Boom Generation, who were once dismissed as a bunch of long-haired, crazy kids, but who now are old enough and vote in sufficient numbers to be taken quite seriously; and
WHEREAS, Adoption of this resolution will not take too long, cost the state anything, or affect the quality of life in this state to any appreciable degree, and if we in the legislature just go ahead and pass the darn thing, we can get on with more important stuff; and
WHEREAS, Sloopy lives in a very bad part of town, and everybody, yeah, tries to put my Sloopy down; and
WHEREAS, Sloopy, I don't care what your daddy do, 'cause you know, Sloopy girl, I'm in love with you; therefore be it
Resolved, That we, the members of the 116th General Assembly of Ohio, in adopting this Resolution, name "Hang On Sloopy" as the official rock song of the State of Ohio; and be it further
Resolved, That the Legislative Clerk of the House of Representatives transmit duly authenticated copies of this Resolution to the news media of Ohio.

1And it has nothing to do with a cartoon beagle.2Perhaps the most light-hearted assembly resolution to date.