European Possession Films of the 1970s Content from the guide to life, the universe and everything 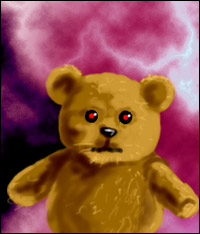 They say that in Italy, they don't ask you what your film is like, they ask you, 'What film is it like?' Say what you will, but the European horror and exploitation market has always been the K-Tel Records of the film industry, serving up old product in appalling new packages. That isn't to say that some great films haven't arisen from this; it simply implies that, with a few notable exceptions, European horror filmmakers are not known for their original storylines. It is much safer (and perhaps smarter) for foreign territories to simply recycle a concept made popular by a successful American film. This monkey-see relationship has nevertheless produced some of the genre's classic works. Of course, Europeans are to blame for some of this: without Dawn Of The Dead there would be no Zombie; without Poltergeist there would be no House By The Cemetery...

... but without The Exorcist, there would be none of the films that follow in this entry.

When William Freidkin's blockbuster The Exorcist was released in 1973, the race to cash in on its success was fast and furious. The two forerunners in this heated heat were Juan Bosch's Exorcismo (released stateside as Exorcism) and Amando de Ossorio's La Endemoniada (US title Demon Witch Child).

In the midst of all the hysteria, La Endemonaida beat Bosch's film to the cinemas by one week.

While suffering from poor production values (and not helped by terrible dubbing in the USA), La Endemoniada does have a slightly more inventive storyline than many of its ilk. An old woman, accused of kidnapping babies for use in witchcraft, possesses the daughter of her arresting policeman. Soon, the little girl is (surprise, surprise!) levitating, cursing, spitting up foul things, and generally displaying an extremely anti-social attitude. The girl gradually takes on the physical appearance of the old witch, and, after a castration, an attack by fuzzy stuffed animals and some other assorted merriment, she kidnaps another child for use in a Black Mass. The cops and clergy intervene and, in a somewhat surprising ending, the girl is killed impaled on a large iron cross.

Exorcismo is a more straightforward re-telling of Blatty's tale. So straightforward, in fact, that the only reason to sit through this film if you've seen its American model is...Paul Naschy! Yes, folks, Waldemar1 himself plays the Exorcist in this one, raising it high above other efforts by default. The demonic trappings are minimal in this tale however, the possessor being the crazed, deceased father of the young girl he inhabits. It would appear that the fellow's wife had an affair with his doctor while he was institutionalised. So, just for revenge's sake, he invades the body of his daughter and turns her into a homicidal maniac. Naschy (actually playing a good guy, albeit a rather stoic one) is an expert demonologist who comes to her rescue in the predictable finale.

One of the more interesting (and remembered) European 'possession films' is Alberto DeMartino's L'Anticristo(The Tempter). Never shown in the USA in its fully uncut version, DeMartino's film is one of the most original Exorcist clones and boasts some fine cinematography (by none other than Joe D'Amato himself, Aristide Massaccesi) and a great score by the legendary Ennio Morricone.

Carla Gravini, a sexually repressed, wheelchair-bound young woman is possessed by the spirit of one of her ancestors; a witch burned at the stake during the Middle Ages. While sleeping one night, she is transported back to the time of her forebearer's inquisition, where she is force-fed the head of a toad and, in a notorious scene (unhesitantly cut by the USA distributor), is made to tongue the anus of a live goat. Naturally, this does little for her already fragile state of mind, so the family calls in the cavalry in the form of exorcist Mel Ferrer.

Ferrer performs a perfunctory exorcism, only to have Carla escape off into the stormy night. He finally corners her and, in a complete reversal of Freidkin's film, the demon is expelled by thrusting a wooden crucifix between her legs!

L'Anticristo is one of the few films of this sub-genre to become somewhat of a cult item. It can still be found, in its truncated form, in video stores across the USA The European possession film that scored highest at the stateside box-office, however, was Sonia Assonitis's comparatively dull Chi Sei? More familiar to domestic horror fans as Beyond The Door.

Beyond The Door opens with a voice-over by old Scratch himself ('Please allow me to introduce myself...') warning viewers of the tale about to unfold onscreen. We are then introduced to Dimitri (Richard Johnson), a man who has sold his sold to the devil for fame and fortune. Neither has come his way. His borrowed time is almost up, so he strikes another deal with the Great Horned One to arrange for his spirit to be reborn into that of a child; the unborn child of actress Juliet Mills.

As one would expect, carrying around a possessed foetus promised to Satan does not do good things for your health. In fact, it makes your head spin 180 degrees, causes levitation, and induces inexplicable bouts of Tourette's syndrome. Finally, as the unholy birth approaches, and as Dimitri pounds on Mill's stomach to speed up the birth, the Devil appears to tell him it was all a joke, his time is up after all. But not before Mills gives birth to a little, mouth-less Eraserhead Jr, with translucent skin.

All in all, a pretty sick joke of a film, but it hit theatres at just the right time and received a wider release that any of the aforementioned epics. Chi Sei? turned a healthy profit upon its USA release and spawned two completely-unrelated sequels (one starring Bo Svenson!). The film does have some creepy scenes, but you've seen them all done before, and done considerably better.

In 1986, Lamberto Bava, son of the great Mario, caused waves in the Euro-horror community with this project, co-produced by Dario Argento (and initially marketed under his name power). After breathless raves began appearing in a certain popular genre magazine by a certain British correspondent, American horror fans waited with baited breath in anticipation of 'one of the best horror films of the last ten years.' Well, we're still waiting, but nevertheless, lofty expectations aside, Demons is a hoot.

In what has become his trademark plot device, Bava traps a group of characters in a large building and scares the bejeesus out of them. The building this time is the Metropol, a Berlin cinema showing a new horror film about demons rising from the tomb of Nostradamus. A girl and her friend are given free tickets to the show by a strange man dressed in a silver-cyborg mask (which will teach you not to trust masks!). Inside the theatre, another patron cuts herself on a similar display mask in the lobby and, during the mid-point of the cinema film, begins to sprout fangs, claws and develops a huge desire to rend flesh. She tears a man's throat out in full view of the audience and, since the infection is spread through the fingernails, soon everybody's scratching at everybody else and all hell breaks loose. Literally.

Our heroes battle through some truly outrageous set pieces; such as a motorcycle chase down the theatre aisles and an escape from the cinema through a hole in the roof made by a falling helicopter, before escaping to the outside...only to find that the infernal plague is now sweeping the world.

In this, his first major film, Bava employs a combination of the styles of his father, Mario Bava, and his producer/mentor Dario Argento. The use of vivid colour and dream-like violence harkens back to Suspiria, while the dark atmosphere of the theatre and the pessimistic ending recall some of his father's best works. Demons was a worldwide hit and spawned a worthy sequel, Demons II: The Nightmare Returns two years later. Bava's subsequent works have not had the same impact on US audiences, but in his native Italy, he lives up to his birthright as a successful film and television director.

1Naschy's most famous role is that of wolfman Waldemar Daninsky