Being An Usher At A Church Wedding Content from the guide to life, the universe and everything 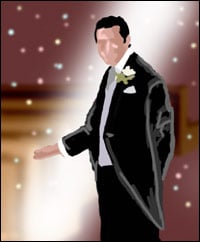 Being asked to be an usher at a wedding is one of the most flattering things that can be asked of you, but what exactly does it involve?

What Is An Usher?

The first question is, 'What on Earth is an usher?.' This is a good place to begin. Essentially an usher is there to help the groom, which is why in America they are known as 'groom's men.' They are not necessarily required to repeatedly say 'Ush!', but can if they wish. An usher is essentially the groom's equivalent of the bride's bridesmaids. Just as the bride can choose several of her friends to be bridesmaids, as well as having a chief bridesmaid, or matron of Honour1, there can be several ushers as well as one best man.

The good news about being an usher is it's a lot less hard work than being lumbered with the best man's job. Ushers don't have to organise the stag do, merely turn up to it. And on the wedding day itself your tasks are not nearly so onerous, as the main benefit is they do not have to give a speech at the reception, although they may well be asked to help with ideas for the best man. Being an usher is a nice thing to be asked to do and is more than just a token gesture. Above all, it's a way for the groom to involve his close relatives and friends in his ceremony. If you have been asked to be an usher, don't be disappointed that you aren't the best man, but feel flattered - and raring to do your bit.

Origins Of Being An Usher

The origin of having an usher is believed to date back to when the groom and his friends, and the bride and hers, would all dress alike. To some extent this still can be seen today with the bridal party dressing similarly to the happy couple. This was to stop evil spirits from casting evil spells on the happy couple, or jealous suitors kidnapping the bride, or worse still, killing the groom. With everyone dressed alike, the evil spirits and suitors would not be able to tell which were the happy couple.

Traditionally, ushers were the relations and closest friends of the groom, although if a groom had no brothers, but the bride had one, then her brother would expect to be asked. This, after all, contributed to the symbolic union of two families, which a wedding represents. Traditionally, too, the ushers are unmarried, although this is not always the case.

Ushers normally dress in the style of the groom and best man. So if the groom is in morning dress, the ushers will be too, reflecting their importance to the day. If it is a traditional top-hat-and-tails wedding or one where wearing kilts is involved, this may well cause some embarrassment for the ushers, especially with the official photographs. In a formal wedding, ushers would normally be asked to dress in a smart morning suit. Don't worry. A morning suit is not the all-black outfit that mourners at funerals wear, but instead is the brightly-coloured suit that mourners at weddings wear.

Traditionally, the Groom would pay for the ushers' outfits, but now it is normal for them to pay for their clothes themselves. Fortunately, to keep the cost down, it is far more common to be asked to rent the suit than purchase it.

Ushers are often asked to rent a specific suit which match the suits worn by the other ushers. They may come from a specific shop, or, if the ushers live over a wide area, may be one available from a national chain. This is more practical than specifying a particular shop that many ushers may not easily be able to visit. Nowadays ushers can even order your suits online in the privacy of your own home, which means ushers fortunately do not even have to go clothes shopping if they choose not to. Although ushers may be asked to wear ghastly waistcoats that would make even John Virgo think twice, some comfort can be found in the fact that normally you would match not only the groom, but also the best man, and the fathers of the bride and groom. Weddings require the wearing of a buttonhole, a small flower on the jacket.

As ushers may not know all their fellow ushers, it is recommended that they meet beforehand and find out what is expected of them from the chief usher, groom and best man. This can be vital as knowing what they are expected to do keeps the ushers' minds at rest, as they are sure of their duties are and who to turn to if a problem is outside their experience, and this helps the wedding run smoothly. In practice, the wedding rehearsal may be the first available time to do this if the ushers live in a different part of the country; normally there isn't much time, or inclination, to discuss practical matters on the stag night.

Ushers should make sure they recognise the key people at the wedding, especially the parents and other close relatives. It helps if there are ushers from the bride's side as well as the groom's.

The ushers answer directly to the chief usher, if there is one, the best man and ultimately, to the groom. An usher is there to calmly and politely iron out any last-minute problems and ensure the smooth running of the day.

Ushers have a wide variety of small but significant duties. The chief usher's main duty is to delegate the other tasks. There is normally at least one usher for every fifty guests, although this number does depend on the number of close friends and family the groom has. There is also often a chief usher, not only in cases where there are a large number of ushers, but also where the groom has more than one close friend, but only one of them can be the best man.

The main duty of the usher is to seat the guests. This is easy, but even so, they will not be sitting the guests at random. There is a rough strategy to being a greeter and seater.

It is a good idea for all the ushers to meet at the venue some time before the ceremony, well before the arrival of any early guests. Here, they can collect buttonholes and the service sheets, synchronise watches and discuss any relevant issues.

While they are welcoming guests they may be asked to pass on information. Questions you might be asked include:

Ushers should ensure they are confident in answering these queries.

They should also bring an umbrella too, in case they need to escort guests to and from their transport in the rain. They may also be asked to look after some of the bride's possessions; bridal dresses tend not to be equipped with pockets.

Where Are The Guests Seated?

Ushers may be expected to ask guests on which side they are to sit. This is because it was traditionally expected that groom's friends and family would sit on the right of the church, the bride's on the left. However, this tradition is in decline, for a variety of reasons, which include:

At least one usher would normally stand at the church's entrance. This is mainly to welcome the guests and to ensure they receive an order of service.

Another usher halfway down the aisle to guide people into their seats also helps. Although this is easier said than done, they will be trying to get guests with large hats and tall people to places where they won't be obscuring other people's view. Mothers with young babies should be sat in the aisle seats at the back of the church where they cannot disrupt the service, and should the babies start being a distraction, their mother should be directed to leave the church, taking the child with them, until it has quietened down.

Ideally, the ushers will have been briefed about any family friction that may need to be negotiated, such as who not to sit next to who.

The very front two rows are to be reserved for people in the bridal party. This includes the bride, groom, father and mother of the bride and groom, the best man, bridesmaids, and the ushers. If the ushers do not keep these spaces free, they will not have anywhere to sit. People asked to give a bible reading will also need to sit near the front at the end of an aisle, so they can approach the lectern easily.

Ushers are not to forget in the event that an overly talkative guest threatens to chat during the ceremony, it is their duty to approach them and say, 'Ush!'. Or kick them out. If, however, there is a man who insists on talking, saying words such as 'We are gathered here today' and 'do you take this woman to be your lawful wedded wife?' do not attempt to throw him into the street; that is the minister, and he is a necessity.

Ushers should also be aware of elderly and disabled guests who may need help. At least one usher should stay at the back during the service, to welcome latecomers and discreetly guide them to a spare space.

Many of the jobs traditionally associated with the role of the usher they are no longer required to perform. Ushers are often used to arrange the catering and help distribute food and drink at the buffet and at the reception, but this is increasingly done by the staff at the reception venue.

Ushers may be asked to help with the organising of transport of the guests to the reception venue, which may just involve giving directions. Ushers should be prepared for this, and if possible, carry a small map in their pocket.

During the official photography, the ushers may be asked to find specific guests for the photographer's pictures. This is not as difficult a task as it might at first seem as they are almost always going to be located at the bar. After that, ushers normally can start to relax a little, though if jobs need doing, they should be ready to lend a hand.

1Or indeed, a maid of honour, their unmarried equivalent.