Johann Ludwig Burckhardt, 'Sheikh Ibrahim' Content from the guide to life, the universe and everything 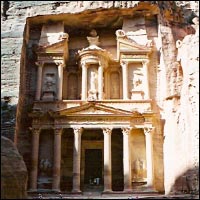 Johann Ludwig (also John Lewis or Jean Louis) Burckhardt (24 November, 1784 - 15 October, 1817) was a Swiss adventurer and explorer. He is best remembered today as the discoverer of the ruins at Petra, in Jordan.

Born in Lausanne, Switzerland, he was the eighth child of a Swiss family that went into exile in Germany after his father was falsely accused of plotting against Napoleon. Burckhardt studied in Leipzig and Göttingen, then moved to England in 1806 with a view to raising support there for anti-French activities.

Professor Blumenbach of Göttingen had supplied him with a letter of introduction to Sir Joseph Banks, president of the Royal Society. Banks was also a prominent member of the Association for Promoting the Discovery of the Interior Parts of Africa (usually known as the African Association), which hired Burckhardt to search for the source of the Niger river. This quest had already claimed the lives of all six of the young men it had sent out to cross the Sahara Desert.

The African Association wanted someone who could disguise himself as an Arab and use the Arab trade routes to explore north-east Africa. Finding the source of the Niger, along with the location of the legendary city of Timbuktu, had been one of the association's main aims since its foundation. Burckhardt signed on in 1809 for eight years on a wage of half-a-guinea1 per day for the first three years, rising to a guinea a day for the remainder, plus expenses. Before departing, however, he was sent to Cambridge to study Arabic, chemistry, astronomy, mineralogy, medicine and surgery. During this period, he took to sleeping on the ground, taking long walks on the hottest days and eating only vegetables, to toughen himself before the hardships he expected to endure.

Burckhardt travelled first to Malta and then Aleppo in Syria to study Muslim law and Arabic. He created a new identity for himself as the Hindustani trader Sheikh2 Ibrahim Ibn Abdallah. He maintained this identity for the rest of his life, and seems to have never been unmasked. When he was once challenged to say something in Hindustani, he replied in German - a bluff that seems to have worked. He remained in Syria for two and-a-half years (six months longer than he originally intended), mostly in Aleppo, with a three-month stay in Damascus.

Burckhardt first planned a short trip into the countryside to study the Bedouin and their culture. He placed himself under the protection of Sheikh Duehy ibn Ryeiben, of whom Burckhardt wrote in a letter home:

He is known to all the principal Baghdad merchants of this town, and my agreement with him has been made in writing, signed by the most respectable of these merchants, as witnesses; I am so far in perfect tranquillity as to the security of my person under his protection. He is indeed a famous robber, but the Shikhs of the Desert have never been known to withdraw their protection from those to whom they have promised it.

To say Burckhardt misjudged his protector would be something of an understatement. Burckhardt was attacked almost immediately after he set out; the sheikh's 'protection' counted for nothing. What he lacked in character judgment, however, the would-be explorer more than made up for in determination. He shrugged the incident off, writing:

A watch and compass were the only articles I regretted to have lost; as to cash, I had not a single farthing3 in my pocket.

He sought out Sheikh Duehy again and restarted with a new guide, only to have his saddle confiscated by another Sheikh at Palmyra when he could not pay his demands. As if that were not enough, when he finally reached Damascus, Sheikh Duehy still insisted that Burckhardt pay the full amount of their contract!

Burckhardt summarised this escapade with the surprisingly positive words:

Notwithstanding these disappointments, which often occur to travellers in these countries, my tour to Tedmor has given me much satisfaction.

Burckhardt might have been brilliant academically, but he does not seem to have been a quick learner when it came to human nature. He once again placed himself under the protection of a sheikh - this time the Sheikh of Sokhne - when he set out to explore Deir. This time, Burckhardt was literally robbed of the shirt on his back, returning to Sokhne with nothing but a loincloth and his humiliation. He seems to have found this too embarrassing to report either in his journal or frequent letters home. We only know about it from the reports of his contact at the East India Company, to whom he turned for assistance.

Still Burckhardt did not seem to learn - or perhaps he felt he had no choice but to persevere. The Sheikh of Kerak became the third 'protector' to betray the young Swiss and steal everything he owned. It was at this point that Burckhardt heard the local tribesmen talking about some nearby ruins and became determined to see them for himself.

Burckhardt needed to explain his desire to continue via a roundabout route through Wadi Musa, rather than the more direct route that avoided it and went through Aquaba. He used the excuse that he had made a vow to sacrifice a goat at the tomb of Aaron, on a nearby hill. 'To this my guide had nothing to oppose,' he wrote, with dry wit. 'The dread of drawing upon himself, by resistance, the wrath of Haroun (Aaron), completely silenced him.' He was, as always, very aware that the locals were likely to be hostile to an 'infidel':

I was without protection in the midst of a desert where no traveller had ever before been seen; and a close examination of these works of the infidels, as they are called, would have excited suspicions that I was a magician in search of treasures.

Although his guide became suspicious (at one point exclaiming: 'I see now clearly that you are an infidel, who have some particular business amongst the ruins of the city of your forefathers; but depend upon it that we shall not suffer you to take out a single para of all the treasures hidden therein, for they are in our territory, and belong to us,' according to Burckhardt), the explorer managed to make entries in his secret journal detailing his amazement at the Siq, rock-cut tombs and theatre. The date was 22 August, 1812, and Burckhardt was 27. His letter to his employers covering this expedition reads:

At the distance of a two long days journey north-east from Akaba, is a rivulet and valley in the Djebel Shera, on the east side of the Araba, called Wady Mousa. This place is very interesting for its antiquities and the remains of an ancient city, which I conjecture to be Petra, the capital of Arabia Petraea, a place which, as far as I know, no European traveller has ever visited. In the red sandstone of which the valley is composed, are upwards of 250 sepulchres entirely cut out of the rock, the greater part of them with Grecian ornaments. There is a mausoleum in the shape of a temple, of colossal dimensions, likewise cut out of the rock, with all its apartments, its vestibule, peristyle etc. It is a most beautiful specimen of Grecian architecture, and in perfect preservation. There are other mausoleums with obelisks, apparently in the Egyptian style, a whole amphitheatre cut out of the rock with the remains of a palace and of several temples. Upon the summit of the mountain which closes the narrow valley on its western side, is the tomb of Haroun [Aaron]. It is held in great veneration by the Arabs.

What is perhaps most remarkable is that Burckhardt seems to have been aware of Petra from his knowledge of classical literature. He recognised the city simply from a description of its location.

After completing this journey, he based himself in Cairo at the end of 1812, intending to further study Arabic and Sharia for several years before heading west through Libya to seek the source of the Niger. During this period, he undertook several journeys while in his Sheikh Ibrahim disguise.

From this point on - unaware that he had already made the discovery that would be his legacy - Burckhardt became more of a hardened explorer. He managed to add a practical ability to deal with the people he encountered to his already formidable armoury of academic and physical skills.

Burckhardt travelled the Nile several times, covering over 1,500 miles to Shendy in the Sudan. During these travels, he rediscovered Abu Simbel. Not content with this, he became the first European to travel to Mecca and Medina, posing as a beggar and impressing a local judge with his knowledge of Koranic law.

Burckhardt finally felt prepared to begin his expedition to the Niger. The learning process had been long and hard - and he had spent what money he had received from the African Association. But he was now fluent in Arabic, an experienced traveller, and a respected expert on Koranic law and interpretation. He returned to Cairo and began organising an expedition to the Niger.

Just 11 days later he was dead from dysentery at the age of 32. He was buried in a tomb in Cairo under the name Sheikh Ibrahim. There is some evidence that his conversion to Islam was genuine, although his family always denied this.

Burckhardt's journals and letters were published posthumously in five volumes:

The first three of these are available online. Quotes in this entry are taken from the first two volumes.

The first European to visit Timbuktu was René-Auguste Caillié in 1828. The source of the Niger was discovered in 1823 by Major Laing. The great river flows from the west, before turning south. Burckhardt could never have reached it from Egypt, which is on the extreme eastern side of the continent.

1In old English currency a guinea was one pound and one shilling, ergo 21 shillings. Therefore, half-a-guinea was ten shillings and sixpence - just over 50p in today's money.2Or 'Shikh', as Burckhardt spells it in his writings.3A quarter of a penny.