Tallinn, Estonia - World Heritage Site Content from the guide to life, the universe and everything 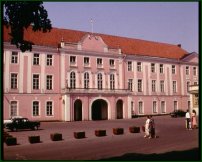 It's quite impossible to determine the beginning of Tallinn's history as there are no written records on the early settlements. The first reliable information about Tallinn dates back to the Chronicle of Latvian Henrik. The Chronicle describes the Danish fleet led by King Valdemar II which landed near Lindanise Castle in June 1219. Tallinn is named after 'taani linnus', which means Danish castle. The castle in question was built by King Valdemar. The settlement quickly developed itself into a busy port.

From 1227 - 1238, Tallinn and Northern Estonia were governed by the Order of the Brotherhood of the Swords who had temporarily gained power from the Danes. Around 1230, German merchants, invited by the Brotherhood of the Swords, arrived in Tallinn from Gotland. The arrival of this group is considered to have been an important addition to the city's population. Tallinn, together with the northern part of Estonia, was returned to the Danish crown by the Stensby Treaty. Ten years later, on 15 May, 1248, the king of Denmark Erik IV gave Tallinn the Lübeck Rights that bound Tallinn to common legal space with medieval German merchant towns. In 1248, Tallinn became a member of the Hanseatic League - a chain of European trading cities. At that time, Tallinn was one of the best fortified cities in Europe, with 66 towers adorning the city wall. However, only about 20 of them remain today.

The ownership of Tallinn changed in the middle of the 14th Century. Forced by difficulties in internal policy and a lack of money, the King of Denmark decided to sell his northern Estonian lands, together with Tallinn, to the German Order.

At that time, merchants and representatives of the most profitable crafts were mostly Germans, generally from Westfahl and Rheinland, and at least half of the townsfolk were Estonian, who were sometimes mentioned as town residents in the period from the 14th to the 15th Century. At the end of the Middle Ages, town residency was impossible for Estonians, mainly because of the high resident fee.

Russia, Sweden, Poland and Denmark battled for superiority in the northern part of the Baltic Sea in the Livonian War of 1558 - 1583. Estonia was one of the major battlegrounds. Fearing the Russian troops, Tallinn and the Harju-Viru knightage1 surrendered to the Swedish Crown in 1561; this subordinance lasted for the following one-and-a-half centuries. Russian troops tried to siege Tallinn twice, in 1570 - 1571 and 1577, but were forced to retreat without conquering the town.

It was during the Swedish era that Tallinn became the centre of a new administrative unit - the Estonian government. The crown validated the historic privileges of Tallinn, which continued to use the Lübeck Rights. Compared to the Middle Ages, the importance of Tallinn was decreasing. The general decline of Hansa trade decreased the wealth and independence of the town, and the centralised power in Sweden tried to curtail the independence of the town council.

The part of the town surrounded by the town wall was not significantly damaged in the war. It was mostly the outskirts that were destroyed, and that only occurred under the orders of the town council, in order to defend the town.

A big plague epidemic ravaged the town in 1602 - 1603 and the Great Fire of 1684 destroyed most of the buildings at Toompea. Only Dome Church and a small stone house nearby were left more or less unharmed.

The northern war devastated the Baltic Sea area from 1700 - 1721. The main adversaries were Sweden and Russia, who battled for superiority in the territory. In 1710, Tallinn capitulated without a fight to the Russian troops.

Since then the Old Town hasn't changed much. Of course, Russians, Estonians, wars and such have left their mark; nowadays the most (or worst) is done by market economy.

In 1997, the United Nations Educational, Scientific and Cultural Organisation (UNESCO) decided to add the historic centre (Old Town) of Tallinn to the World Heritage List. This is because Tallinn is an exceptionally well-preserved example of a medieval northern European trading city and retains the salient features of this unique form of economic and social community to a remarkable degree.

The town wall in its later form was established in the 14th Century; the major boom of town construction (resulting in medieval exteriors that are still preserved today) spread in Tallinn only in the 15th Century. The new town hall was completed in 1404, the Great Guild building in 1410 and the Olavi Guild building in 1422. The Great Fire destroyed much of the lower town in 1433, and this meant a new wave of construction. A series of hill fortifications in front of the town wall were begun in the 16th Century.

All the most significant places of worship in Tallinn were built in the 13th Century: Niguliste Church was established in 1230, Oleviste Church is mentioned for the first time in 1267 and the Dominicans moved to the lower town from Toompea in the end of 1240s and started to build St Catherine's Convent. The Cistercian Mihkli Nunnery was established in the middle of the century. The Bishop of Tallinn, residing at Toompea, governed all of northern Estonia; clerically he was under the reign of the Lund Head Bishop.

Outside the Old Town there are some other significant places that should be mentioned. The Leprosorium or Jaani Hospital, close to the town centre, is first mentioned in 1237. In the beginning of the 15th Century, St Brigit's Nunnery (Pirita Nunnery) was established east of the town; today its ruins are recognised as a magnificent example of Tallinn medieval architecture.

Old Town is the face that Tallinn turns to the tourists. It's a place for eating, drinking, shopping, sightseeing and just spending time. As Estonia is not the best place on Earth weather-wise, most special events take place in the summer. Some time during June, July or August, Old Town Days take place. They recall the medieval past of the town and allow one and all to revel in and enjoy the colourful history that has shaped Tallinn.

In the middle of the summer for four days, the town hall square is turned into a medieval market. Within the old walls of the Old Town, the skills and traditions of ancient masters are brought to life, and noble citizens, buffoons and musicians wander the streets.

Old Town is rich in concert venues. The medieval town hall, the House of the Brotherhood of Black Heads, the acoustically superb St Nicholas’s Museum Concert Hall, the Gate Tower, the Dominican Monastery, and the Kanuti Guild Hall are only a few examples.

1A knightage is a body or group of knights.