The Gentleman's Gentleman's Guide To Polishing Shoes Content from the guide to life, the universe and everything 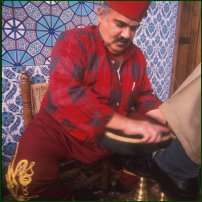 For the Gentleman's Gentleman, there are few pleasures in life that match that of stepping out with confident gait in nice, shiny footwear. It is a mark of refinement, a statement of personal pride in one's appearance that says 'look at me'. Gleaming footwear need not solely be the mark of a special occasion, although one would shudder at the prospect of proposing to one's beloved by falling upon bended knee and focusing attention upon shoddy shoes. The sparkle from the toecaps should rival those from the diamonds in the ring.

A gentleman is judged by his footwear and therefore employs staff to take care of them. It is unlikely that readers here are gentlemen (or ladies) and so it is important that the following instructions are adhered to. Doing so will not only improve your appearance, but will increase your employment and career prospects, raise your self-confidence and attract members of the opposite sex for mutually enjoyable benefits. Who knows, you may aspire to that pinnacle of working class achievement, becoming a Gentleman's Gentleman1.

Whether shining boots or shoes, the procedure is identical and the necessary equipment is the same. You will require the following:

This should be cotton and well worn. The familiar 'yellow duster' is ideal, but it should be washed and dried a few times to thoroughly soften the material and remove any stray fibres.

The beeswax polish will be used in the final polishing. You should never confuse the two tins, as the initial polishing will transfer a collection of grit and dirt into the polish tin that could scratch a highly-polished surface.

Making use of the 'on' brush, give the boots a vigorous brushing, paying especial attention to the nooks and crevices of lace holes and creases to remove any dirt or mud. Then, using the polish without the beeswax, polish the boot all over using the same 'on' brush until a reasonable all-over shine is achieved. Even if your boots aren't especially dirty, give them a good brush polish from time to time as this removes flaking polish and helps to feed the leather.

Now apply the beeswax polish with the 'on' brush. Be liberal in the application, making sure that polish is fed into the join between the sole and the upper of the boot (the welt), and along any stitch lines. Taking the 'off' brush, vigorously brush the boot to a shine. A fast action is preferred as this generates heat that aids the flow of the polish into the leather. To finish off this stage, take the pair of ladies' tights and roll them into a ball. Buff the surface of the boots with the balled-up tights and this will produce a nice sheen sufficient to impress the working classes.

To take your footwear to the desired status of being fit for a gentleman (or lady), we must 'bull' the boots.

Fill the lid of the polish tin with clean tapwater and lay it close to hand. Fold the duster in half and wrap your index and ring fingers tightly, holding the remainder of the duster in the palm of your hand with your remaining fingers and thumb. Dip the cloth into the tin of water to dampen it, then into the polish tin to lift a little polish. Begin applying the polish to the boot in small, overlapping circles. As the polish dries, it will become sticky, signalling the point at which you dip the cloth in the water and polish again and repeat the process. As you build up the layers of polish, you will begin to see a shine developing. Continue with the small circles using less and less polish at a time and a progressively lighter touch.

An acceptable shine has been achieved when you can distinguish individual teeth in your reflection on the boot.

Using the above method will invariably produce the best results, along with the pride in producing something stunning by your own efforts. There are, however, 'caddish' methods that can reproduce a facsimile. They are listed here merely as a guide for the curious.

Proprietary brands of liquid floor polish such as 'Klear' can give a high surface shine. The addition of black ink helps to avoid, but does not obviate, the white lines created by cracking. This is a short-term fix however as the brittle surface does tend to flake quite badly. Forces-issue polish such as the ubiquitous ME7 tend to crack less easily but have the considerable failing of turning blue in the rain.

It is possible to use paint to achieve superficially good results, especially if sprayed on, but paint does tend to flake quite badly as the leather flexes. The best paint for the job is RAF nosecone paint although it should be pointed out that such artifice is immediately recognisable both to gentlemen of breeding and their man-servants.

Apply a thick layer of polish to each boot using the 'on' brush. Leave to dry for ten minutes and repeat the process twice. Hold the boot inverted above a steaming kettle and polish in small circles using a cloth. This has the advantage of being quick but the disadvantage of busloads of tiresome oiks barricading your Gentleman's Club in protest at you destroying the planet through excessive use of electricity and whatnot.

The armed forces provide excellent training in polishing boots. Household Regiments such as the Guards provide a three-year crash course which also covers brasses, blanco and occasionally horses. The individuality of the regiments leads to a marvellous variation in techniques, although the general principle remains the same. The Lifeguards swear by finishing off with a spray of aerosol polish, but such technical sophistry is frowned upon generally. Cotton wool balls are used by many as a substitute for the polishing cloth, while some say ladies' tights are common and a fine silk stocking is de rigeur. The common ranks use spit instead of tapwater, (hence 'spit and polish'), but this is affected rather by whatever one has recently consumed. Venison or pheasant can give one's saliva a rather acid tang, which in turn affects the polish. A dash of aftershave in the water can help it evaporate more readily. Using brown polish on a black boot in the final stages of polishing can add a deep lustre to the shine.

Setting fire to polish in order to improve the shininess is a myth. All that happens is the oils, waxes and solvents needed to keep the leather supple are burnt away. This myth probably arises from the practice of initially preparing a pair of new boots for breaking in and bulling.

Breaking In And Preparing For The First Polish

On receiving your first pair of boots, stuff them with damp newspaper and lace them up tightly. Leave overnight, then replace the paper with damp rags pushed solidly into place. Lace the boots up tightly again. Hold the boot inverted above a heat source such as a heater, heat gun or naked flame, heat a small area of the boot until it is hot to the touch. Take care not to actually burn the leather. Take a stick of natural beeswax and rub it into the heated area. It should readily melt and be drawn into the leather. Keep adding beeswax until it starts to run off, a sign that the leather has absorbed all it can. Repeat the process until the entire boot has been covered. The result will be a pair of supple, water-resistant boots ready for polishing.