Ligers and Tigons - When Big Cats Meet Content from the guide to life, the universe and everything 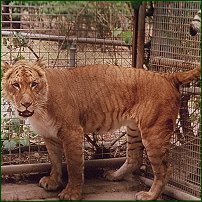 While not entirely accurate, Napoleon's take on the magnificent liger in the 2004 film Napoleon Dynamite isn't too far off. Granted, ligers aren't known to have any spectacular or special magical skills, but genetically they are a 50-50 mix of lion and tiger.

What Exactly is a Liger?

As the portmanteau name suggests, a liger is the offspring of a male lion and a female tigress and pseudo-scientifically classified as Panthera Leo + Tigris - which is simply a combination of lion and tiger because the liger is not recognised as an individual species. Ligers get their colouring from their fathers. They are generally a sandy brown colour with slightly darker stripes which are less prominent than those of the tiger. Some ligers will also have a faintly spotted appearance, inherited from the lion genes1. Any mane that a liger does grow will be shorter and less prominent than that of a lion, instead resembling that of a male tiger. Larger than the largest of the big cats, ligers have been known to reach 900lbs (400kg) in weight, which is twice as heavy as a fully grown male lion.

A tigon is the result of male tiger mating with a female lioness and classified as Panthera Tigris + Leo because like the liger, the tigon is not recognised as an individual species. Generally, a tigon will be darker in colour than a liger, closer to the colour of a tiger but like the liger will also have faint stripes, spots or a combination of both. In the 19th Century, tigons were a much more common sight than ligers and were often deliberately bred in zoos for the amusement of the public. Today this trend is reversed as a liger is a far more spectacular sight owing to its larger size.

Is There a Difference?

For two creatures that come from the same two parent species, there are many differences between ligers and tigons, most notably the size and looks. Where a liger outgrows both parents, the tigon is dwarfed by them; even a male tigon rarely reaches the size of an average lioness. The shape of the face and body is determined by which genes the hybrid gets from which parent. This also means that there is a greater level of variation from hybrid to hybrid.

There are, however, many similarities between ligers and tigons: it is reported that both 'speak' lion and tiger; communicating in various sounds that are unique to one or the other parent. Both creatures also spend time in water, which is inherited solely from the tiger genes, and both have been known to exhibit signs of confused behaviour where the social instincts of the lion are at odds with the solitary nature of the tiger.

Both male ligers and male tigons are almost invariable sterile. The females of both species, however, are capable of breeding with either lions or tigers. This will lead to further combinations of hybrid offspring, each of which has its own specific portmanteau name:

There are no reports of these hybrid-hybrids breeding, which some claim is nature's way of saying 'enough already'.

Given that the natural habitat of lions and tigers only overlap in the most exceptional of circumstances2, there is in effect no chance of lions and tigers interbreeding like this in the wild. They have, however, produced offspring when they have been kept in cages together in zoos and circuses.

Reputable animal curators do not aim to create ligers and tigons as a matter of routine - they believe it to be bad animal husbandry. Aside from the detrimental effect it has on conservation issues3, hybrid cats are thought to be more susceptible to diseases and genetic conditions. Although genetically possible for the two species of cats to breed, it would not happen in nature and is therefore avoided by professionals. Essentially, what the experts are saying is that just because it can happen doesn't mean that it should. The majority of all interbred cats in captivity today are said to be the result of accidents.

If ligers and tigons were to be found in the wild, their survival rates would probably be terribly low as each would have difficulty hunting due to their size. A liger would be too large and heavy to effectively chase down prey, while a tigon would be too small to defend itself against the larger cats with whom it would be in direct competition for prey.

Is it Just Ligers and Tigons?

While liger and tigons are the most famous of the big-cat hybrids, there have been other cases of interbreeding between the four big cats4 with mixed results.

1Newborn lion cubs are spotted, which acts as camouflage in the wild.2This would have been more common in the past with greater numbers of both creatures, but with today's reduced numbers, the chance of an encounter in the wild is virtually nil.3If a fertile tiger is carrying a hybrid offspring then there has been a missed opportunity to produce more tigers. The main aim for conservationists is to increase the population of endangered species. You can always create more ligers and tigons, but once the tiger has gone it's gone for good.4Lions, Tigers, Leopards and Jaguars.