Privet Hawk Moth Content from the guide to life, the universe and everything 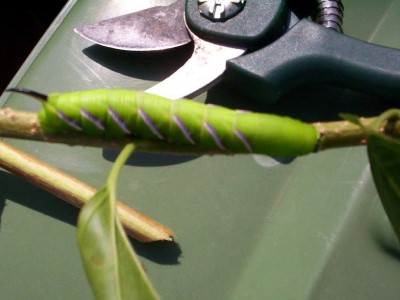 Also known as Sphinx ligustri, this is Britain's largest moth, with a wingspan of over 10cm. It's an incredibly strong flyer, and will happily fly into windows at 30mph - their brain capacity is incredibly small.

As a native animal, its population is declining, so it's worth trying to breed them for release into the wild. If you do intend to breed them try to buy them as eggs, which are available from all good stockists in April and early May.

The caterpillars are quite pretty; a light green with diagonal white/lilac stripes. Feed them on lilac or privet, changing the food every day. Use a small brush to get them off the old food. They only take four weeks or so to reach their full-size of 10 - 12cm when they go off their food and start turning a bit brown. At this point put 15cm of soil in a plant pot, cover it over, and place them in. They dig deep down to pupate. Put the pot away somewhere quiet, and ignore it until next July, when the pupa will magically hatch within a few days. For some reason they often seem to come out two-by-two.

Once hatched, give them some sort of flight space, and put a small baby-food jar filled with sugared water topped with cotton wool as food. They're almost guaranteed to mate, and will lay eggs on the privet1 that you've so thoughtfully provided. A couple of years of this and you've done your bit for the environment.