Billy Joel's 'We Didn't Start The Fire' - The Song Content from the guide to life, the universe and everything 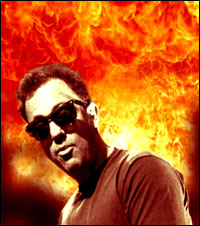 Billy Joel was born 9 May, 1949, in New York. As the son of a talented musician in a well-off family, he was naturally pushed into taking piano lessons at age four. Unlike his strictly Catholic father, Billy proved to be something of a rebel during his formative years, dismissing the classical music and musical theory that his piano teacher was foisting on him and failing to graduate from high school due to repeated truancy.

Joel's talent for jazz piano and organ quickly won him favour. Producer Shadow Morton signed Billy's first group, The Echoes, but they never played a live gig. Rumour has it that Billy played piano for Morton's other group, the Shangri-Las, on their worldwide hit, 'Leader of the Pack', but this has never been verified. Billy's solo career took off during the 1970s with a succession of solo albums. Piano Man would win long-lasting critical acclaim, as would the crowd-friendly Turnstiles, but critics claimed that the majority of Joel's albums were heavy on padding and easy crowd-pleasers. The pop era was less kind again to Joel - his aspirations as a stadium rocker were largely overlooked. A marriage to supermodel Christie Brinkley failed to set the public alight, and it seemed that Joel was destined for the rock-star decline into mediocrity. That was, until his release of 'We Didn't Start The Fire'...

There are many opinions on the origins of the song: the most commonly related is that Billy Joel overheard his teenage nephew complaining over a history essay that 'No history ever happens these days'. Inspiration fired, Joel set out to prove, in musical format, just how much had happened over the last 40 years. He chose to begin with 1949, the year of his birth, and painstakingly built up a chronological list of events, to form one of the most memorable and enduring 'list' songs in pop history.

The concept of the list song itself is nothing new. Bob Dylan brilliantly told his life story as little more than a succession of unconnected phrases in 'Subterranean Homesick Blues'. Ian Dury provided a wry view of modern British life in 'Reasons To Be Cheerful'. Even Madonna got in on the act - the bridge of 'Vogue' is much more famous than the rest of the song. Other musically notable examples include Holly Johnson's 'Legendary Children' and the Pasadenas 'Tribute (Right On)'.

'We Didn't Start The Fire', unusually for Billy Joel, is a guitar-led song (most of Joel's output, as you'd expect, is piano-led). The chorus is worthy of note - the sense of time rushing on and the uncontrollability of history created by the 'fire' metaphor is undeniable. The verses, though, are the parts that burn most indelibly in the memory: for those old enough, the lyrics form a newsreel-style footage in the mind; for younger listeners, intrigue is formed in wondering why these subjects have moved Billy to include them. The educational aspects to the song have been used many times since by essayists, historians and teachers, and many words have been devoted to wondering exactly why Billy Joel chose those exact events. Of course, it could have been because they rhymed...

Joel's singing voice is nothing if not passionate throughout the song: his anger at tragic, wasteful incidents (carefully placed at the end of verses) such as Belgians in the Congo and JFK blown away is all too obvious. Most intriguing is the final crescendo, which takes in several years of history all at once, building to an almost frustrated cry of I can't take it any more. Is Billy Joel admitting that history is moving faster now? Or that he is growing too old to remember everything? Whatever the case, it is certain that 'We Didn't Start The Fire' was a stand-out point in Billy Joel's career1.

Storm Front was the album that played uncomfortable host to the song. A collection of nautically-themed songs (Joel had a strong sailing interest), it was largely lacking in noteworthy songs, and a huge stadium-rock song, as 'Fire' was to become, did not sit happily with its stable-mates. Whatever the drawbacks, Billy Joel became much more recognised - both among the public and the critics - and his next album, River of Dreams, was an eclectic mix of high-quality music, which quickly went platinum. Billy Joel became one of rock's respected elder statesmen; he was eventually inducted into the Rock and Roll Hall of Fame. A crowd-pleaser he may have been, but the strength of 'We Didn't Start The Fire' did more than please crowds; it educated them too.

1The song was released in autumn, 1989, hitting the Top Ten in the UK and reaching the Number 1 spot in the USA.