Archbald Pothole State Park, Lackawanna County, Pennsylvania, USA Content from the guide to life, the universe and everything 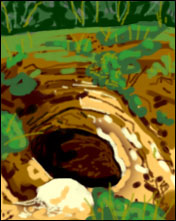 In 1884, coal miners were pursuing a vein of anthracite coal in Lackawanna County, Pennsylvania, when they came across a curious thing - a hole in the roof of their mine that let in fresh air.

As they cleared away the debris, they discovered a huge crater on the surface which reached the whole way down to their coal seam 38 feet below the surface. Geologists have since declared that the hole was in fact a glacial pothole.

The pothole was formed during the last ice age between 15,000 and 18,000 years ago. Geologists speculate that the hole was created by water cascading down through a crack in the ice sheet which scoured the bedrock creating a hole. Similar holes exist at the base of modern waterfalls.

It is believed that the Archbald Pothole is the largest in the world, at 38 feet deep and 40 feet across at the top. The hole tapers to 15 feet at the bottom. Looking into the hole, you can see the various rock layers that the water cut through to create it, from coal at the bottom to shale and sandstone closer to the top.

The pothole is the main attraction in this 150-acre state park. There is a viewing platform from which it is possible to take photos into the hole. Have a care however as park rangers tell us that they recover half a dozen cameras at the end of each season that visitors have dropped from the platform.

The park has restrooms, a picnic area and a few easy and unspectacular hiking trails. The park is open from 8am to 9pm in the summer and 8am to sundown out of season.

The pothole is located off of US Route 6 north of Scranton.

Is it worth the trip? Honestly - no. But if you've got a burning desire to see a large hole in the ground or are a serious geology fan, you might enjoy yourself for half a hour.