Kellogg's Cornflakes Content from the guide to life, the universe and everything 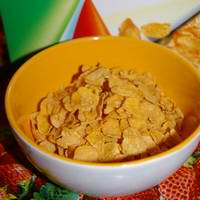 No man has changed the way we eat breakfast more than Will Keith Kellogg (1860 - 1951), inventor of the now legendary Kellogg's cornflake. During the early 1890s, he and his brothers carried out numerous experiments in preparing cereal grains in various ways, finally hitting on a winning method of rolling cooked wheat mush into flakes. These would then be oven-toasted which produced a tasty, crunchy breakfast food of high nutritional value.

After further experiments and the development of a new flaked product made from corn, Will Kellogg organized the Battle Creek Toasted Corn Flake Company in 1906, which thereafter was known as the WK Kellogg Company. They launched an ambitious national advertising campaign to promote cornflakes, not merely as an enjoyable health food, but as a convenient breakfast food. Various cartoons and people graced the box until 1958, when Cornelius, the iconic green rooster with the red comb and yellow beak, made his debut. He has been a fixture on the box ever since, and occasionally shares his space with celebrities.

The Kellogg's cornflake has remained to this day, a great favourite, along with a wide range of other cereals such as Frosties, Coco-pops and of course, Rice Krispies. One of the major plus points in favour of the cornflake is just how easy it is to prepare. A bowl, some milk, a spoon, sugar (optional) and a box of cornflakes is all you need in the morning to kick-start the day.