The Floating Bridge, Southampton, UK Content from the guide to life, the universe and everything 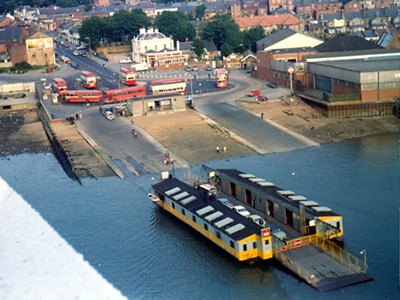 Southampton Water feeds into the Solent from two rivers, the Test and the Itchen. Over the Itchen there is a toll bridge by which all those people who live east of the river can reach the west side where the city of Southampton in Hampshire, UK, lies. The east side of the bridge is in Woolston and the West side is in Southampton. This bridge has been in operation for over 20 years but previously there was a much more interesting way to cross the river using a floating bridge.

This car and people transporter (it could not take lorries or buses) worked on cables pulling it to and fro across the water. It was bright yellow and used to creak a lot. It was old and clanky and to be honest looked like it would never manage to stay afloat.

As a child, it was a treat to be taken on the floating bridge. As you stood at the railing and watched the shores of Southampton draw closer, the wind would whip your hair around your face. There was an overpowering smell of petrol from the cars and the facilities were basic in the extreme. Travelling as a foot passenger in anything but the hottest weather required at least three layers of clothing to ward off the chills from the Solent winds. Despite this, people seemed to enjoy the trip and regard it as a respite from driving on busy roads.

When the floating bridge was closed and the toll bridge opened in 1977, many drivers rejoiced as it was quicker. However, since that time many people have used the bridge to commit suicide. Unfortunately the ones who are not totally serious about it and intend to make a soft landing in the water, forget about the crosswinds and end up coming to a sticky end in the car park!

For a few years the floating bridge was anchored in Woolston and used as a nightclub. However, it was closed by the police due to the number of fights caused by customers at the club.