Pontiac's Rebellion Content from the guide to life, the universe and everything 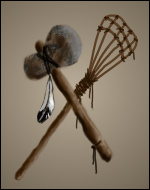 In the early part of 1763, discontent with British rule among the First Nations1 of central North America boiled over into violence. The specific grievances of the nations were various, but all were centered on what was seen as the injustice of the British colonial rule. Pontiac, chief of the Ottawas, lead an alliance consisting of his own people, the Huron, the Potawatomis, and the Ojibwa against the British presence in the Great Lakes region. Each nation targeted the British in their own region, but the British faced war in a triangle with its vertices at Michilimackinac in the North, the Ohio valley in the south, and the Niagara Peninsula in the east. Pontiac immediately besieged Fort Detroit and wiped out a small British garrison at nearby Point Pelée, on the Canadian side of Lake Erie. By summer Fort Sandoské, Fort St Joseph, Fort Miami, Fort Michilimackinac, and a number of others had fallen to Pontiac and his coalition.

The fall of Michilimackinac came as the result of an ingenious sporting ruse. After a token siege, Pontiac's men offered a truce and invited the British garrison to enjoy the spectacle of a celebratory lacrosse game. The British accepted the truce and relaxed along the top of their wall to enjoy the game. Lacrosse today is an exciting game; in the 18th century it was exciting, bloody, and chaotic in the way that American aboriginal ballgames have always been. The men, both players and British fans were enthralled by the game, but the women outside the walls were remarkably subdued, wrapped closely in blankets. Too late for the British garrison, the reason became clear.

Play moved closer and closer to the walls. Inevitably, the ball went wild and vanished into the fort. Innocently, the players asked if they could come in to get the ball. The soldiers, enjoying the game more than was wise, threw open the gates. The players quickly dropped their crosses, grabbed their weapons that had been secreted under the blankets of the sweating women, and took the fort within minutes. Few British survived the Michilimackinac lacrosse game.

Detroit, however, proved a tougher nut to crack. Despite Pontiac's defeat of British reinforcements at Bloody Run on July 29, the British held out2. As the year wore on, Pontiac was unable to hold onto his allies as they melted away to their traditional winter lands.

Two years later a number of treaties were signed with the British. Despite his insistence and assurance that they had not given up their land, Pontiac was exiled by his own people for what they saw as his betrayal of them. While in the later course of history Pontiac's people did lose their lands and way of life, it seems that the British intention at the time was to be satisfied with their colonies in the East of North America. With the successful rebellion of the American colonies, the independent aboriginal nations of central North America were even more essential as a check on American expansion and as allies of British colonies in Canada. While the First Nations proved a decisive help to Britain in the War of 1812, they were soon swept aside by the expansion of the United States in the Indian Wars, and in the north, by the steady and somewhat more peaceful increase of European settlement in the Canadian West. Pontiac did not live to see the displacement of his people: his life ended at the hand of an assassin in April of 1769.

While Pontiac was ultimately unsuccessful in throwing off the yoke of British rule, his military successes made clear to the British that the First Nations were a force to be reckoned with in North America. Because of that realisation, the British courted the First Nations as partners and allies in the rule of North America. It was this ongoing alliance which provided much of the manpower and strategic genius that defeated the American invasion in 1812. The debt owed to Pontiac and other First Nations leaders has perhaps too often been neglected and forgotten.

The sieges of Detroit and Michilimackinac during the Pontiac Uprising are the backdrop of the novel Wacousta by Major John Richardson, a Canadian veteran of the 1812 siege and capture of Detroit.

1The aboriginal nations.2In 1812 Detroit fell without a shot to another ingenious ruse, this one designed by the Shawnee chief Techumseh.