The Role of Deforestation in the Fall of Rome Content from the guide to life, the universe and everything 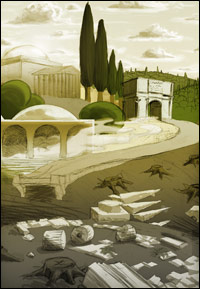 From the time that Octavian became Caesar Augustus in 27 BC, the Roman Empire dominated the Mediterranean world for about 500 years. The Emperors had absolute control over the lives of as many as 70 million people - from Hadrian's Wall in Britain to the Euphrates River in what is now Iraq. The Roman legions were the largest and most powerful military the world had ever known, and peace and prosperity reigned without interruption for centuries at a time. The famous historian Edward Gibbon describes this as the best time to be alive in the entire history of the world. Yet in 476 AD the last emperor, Romulus Augustulus, was removed from power at the whim of the barbarian general Odovacer. What events led the most powerful empire in the world to its dramatic collapse? The question of the fall of the Roman Empire has been debated for 1500 years, but new evidence suggests that the wealth and prosperity of Rome may have been the cause of its own downfall. According to a new theory, environmental damage, and particularly deforestation, to meet the needs of the luxurious elite caused a whole host of problems eventually weakening the Empire to the point that it could no longer stand.

The Causes of Ancient Deforestation

Wood was one of the most sought-after commodities in the Ancient World, for everything from firewood to silver-mining. Here are a few of the most prominent and important causes of deforestation:

Probably the simplest and most obvious cause of deforestation is for wood for building. Wood was the primary construction material for houses and public buildings throughout the Empire. Even such massive and well-known icons as the coliseum were originally built of wood, and building palaces for the Emperors and other nobles required massive timbers, some of which would be discarded only a few years later when the palace was destroyed for an even larger one. Marble only became common in later years when wood supplies ran low. Wood was also used in every aspect of shipbuilding - an important resource for an empire that depended on the quick movement of troops to far-flung corners.

In the ancient world, fossil fuels were unusual enough to be a curiosity, and certainly did not provide any major heating source. Almost all heating was done by wood and wood products1 and while it may not seem like such a major factor it becomes a different story if you think about the Roman baths. The public baths2 were kept constantly at a minimum of 130 degrees Fahrenheit (54 degrees Celsius), and even a very small bath required 228,000lb (103,421kg) of wood per year. The Emperors recognised the importance of the baths in keeping the populace happy, and made keeping them running a primary goal. A whole guild, equipped with 60 ships, was created specifically for the purpose of obtaining bath-heating wood. Large palaces and villas also often had personal central heating systems; one such system has been evaluated and determined to require 2,506,000lb (1,136,722kg) of wood per year in order to properly heat the villa.

Almost all of the Roman industries required some quantity of wood. Wood was burned to fire the bricks used in building the aqueducts, in making glass windows, in running the lime kilns which made concrete3, and in smelting iron and silver from their respective ores.

As the Empire became more and more urbanised, the population grew as never before in European history. The enormous population required vast farmlands, and most of the Italian peninsula (which had been heavily forested) was cleared for farming. The widespread grazing by goats, sheep, cows, and pigs made it practically impossible for the forests to recover from this loss.

Finally, conquering generals such as Julius Caesar often found that native tribes in Gaul4 or Britain would simply escape them by running off into the forests and launching surprise attacks when they tried to set up camp. To solve the problem, many generals simply took the easy route and burned down the forest. Many thousands of acres were cleared this way by Caesar alone.

The Effects of Ancient Deforestation

At first glance, the many issues listed may seem insignificant to the affairs of a great empire. However, it turns out that deforestation had many negative effects which were at least contributing factors, and possibly primary causes, in the fall of the Roman Empire.

Probably the primary effect of this widespread deforestation was the loss of topsoil throughout Italy. Rich hillside soil washed away with no vegetation to hold it in place, decreasing crop yields. In an empire that was already struggling to feed its massive population, this depletion struck a devastating blow. Although agricultural writers such as Columella published advice for retaining topsoil, the farms were primarily owned by wealthy absentee landlords and worked by apathetic slaves. Neither group paid particular attention to the steadily worsening situation. Eventually Rome came to depend entirely on North Africa for food supplies, and famines and riots were common when the shipment was delayed by bad weather.

As a result of the soil erosion from hillsides, water and rich soils built up in lowland areas, forming large marshes. The spread of malaria from these marshes was so bad that it forced the abandonment of the few remaining cultivable lands in Italy and clogged the already swollen cities with yet more unemployed dependant citizens.

Abandonment and Flight of Industry

Industries were forced to pick up and move every few years as the surrounding forestlands were depleted. The glass and brick industries moved from the vicinity of Rome to the south of Gaul, causing exorbitant shipping costs to drain the imperial coffers. The draining of the treasury was made worse in the 2nd Century AD, when the wood supply for the important silver mines5 in Spain ran low and the supply of new silver was cut off. Rome had a trade deficit of over a million sesteres per year with China, Persia, and Arabia, and without a constant source of new silver this bled the Empire dry. An effort was made under the Emperor Commodus to alleviate the problem by weakening the currency 30%6. By 300 AD coins were only 2% silver and considered universally useless.

The Fall of the Roman Empire

So, what was the end result of this all? In essence, at the same time as neighbouring barbarian tribes became more powerful and organised, Rome became a starving parasite which had sucked its land dry. Population began to decrease, and with a worthless coinage and empty treasury there was no way to pay the army. Eventually, in 376 AD, there was no longer any way to keep the barbarians out, and the borders were overrun by a series of invasions. 476 is the year usually given as the official fall of Rome - but it was nothing but an empty shell for many decades before that, a victim of its own rapacious hunger and unwillingness to develop sustainable systems. As the great Roman orator Cicero said in a speech which no one apparently heeded: serit arbores quae alteri seculo prosint ('He plants trees so that another age may profit').