The Art of Getting Dressed with a Towel on Your Head Content from the guide to life, the universe and everything 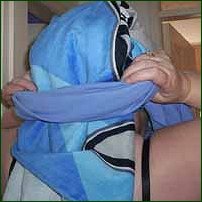 There are many reasons for wanting to keep a towel securely wrapped around your head. Your hair may be wet, for example, or you may just be having an amazingly bad hair day, or it could be the latest fashion statement. Whatever it is, here is a definitive guide to getting dressed with that precious water-absorbent commodity, the towel, upon your head.

Now if you're female, or a man with long hair, you've probably tried it at least once. Surprisingly, this is a difficult and somewhat arduous task involving much more of a struggle than those who haven't tried it may think.

Putting on the Towel

Firstly, it is important to understand how to go about the process of getting that towel onto your head in the first place. One recognised way is to stand with your hair hanging over the bath and to get a medium-sized towel (as hand towels tend to be a little on the small side) and place the middle edge of the longest side of the towel on the back of your head. Then wrap the side edges round to the front, tucking each corner under the edge closest to your face. Next, twist the top of the towel, the part furthest from your head, around to secure your hair. It may need more than one attempt if you're new at trying this. Then, if necessary, a further step to securing the towel is to tuck the bottom edge into the back of the towel at the base of your neck.

Now onto the important bit. First things first, it is recommended that you put on any items that do not require pulling over the head, such as undergarments1, trousers, and socks. Eventually, no matter how hard you try, you're going to have to pull something over your head - it's almost unavoidable.

Of course, there are always going to be those people who suggest such things as drying your hair before getting properly dressed, but to them we say: 'if you haven't tried everything once, then you're missing out on a lot.'

1Unless you have some that do require to be pulled over the head (such as a vest perhaps).