Muffin the Mule - the TV Show Content from the guide to life, the universe and everything 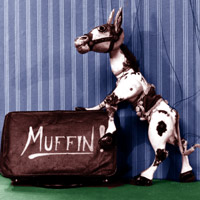 In 2006, a small wooden horse celebrated his 60th birthday. For some, his name had become a double entendre invariably accompanied by the almost Pavlovian response 'isn't that illegal?' yet with his old stable-mates Andy Pandy and the Flower Pot Men, he also carries with him inherited memories of a simpler time. He never spoke, though he understood English as only a puppet horse can do, and he specialised in a rather limited form of dance. But then, how many other stars became famous for dancing on top of a piano and nodding their head?

His name was Muffin. This is his story.

Though regular UK television transmissions didn't commence until 1936 - and even then only in the London region - a few experimental broadcasts were made some years before that by the British Broadcasting Corporation (at the time the only legitimate radio and television broadcaster in the country). As early as 1934, a tiny number of viewers would have been able to see a performance by Hogarth Puppets - operated by husband-and-wife team Jan Bussell and Ann Hogarth, and built by master puppet-maker Fred Tickner. A menagerie of wooden string-controlled puppets pranced about, including a comical, nameless mule with a larger-than-normal head and very stiff legs. After the broadcast, all the puppets, including the mule, were put into storage.

More than a decade later, Bussell and Hogarth were approached by TV presenter Annette Mills (the elder sister of actor John Mills) about using one of their puppets for her children's show. Mills presented a musical programme for very young children on the still-new BBC television in a teatime-friendly For the Children1 5 o'clock slot, and she had come up with the idea of having a puppet perform alongside her on the top of her piano, which resembled a small stage. Looking through the stores of puppets, Mills selected two that took her fancy, a clown, which she named Crumpet, and that mule, which was given the name Muffin. The two toasted-bread-named puppets soon became popular guests of Mills, though it was Muffin that appeared to be everyone's favourite. Eventually, it was decided that Muffin would become a TV star in his own right and on 30 October, 1946, he and Annette Mills appeared in the first episode of Muffin the Mule.

The format for the show was very basic and, like The Teletubbies 50 years later, relied greatly on repetition. Annette Mills would chat with Muffin, who'd horse about (sorry) before dancing along to Mills's songs, which she'd usually sing twice. Occasionally, Muffin would be joined by a special guest puppet who would come with their own theme song, also performed by Mills. The puppets included Louise the Lamb, a dancing Seal called Sally, a penguin called Mr Peregrine Esquire, Big Chief Carrot Top and - er - Wally the Gog, who was a minstrel puppet. The least said about that the better.

The episodes were generally transmitted live from the BBC's Alexandra Palace studios, though some were also filmed for later re-broadcast. Muffin the Mule became one of the first British TV shows to spawn a merchandising range, with books, clothing, toys and even a regular comic strip in TV Comic. Sadly, in 1955, the show came to an abrupt end when Annette Mills died of a sudden heart attack. Some of the recorded episodes were repeated for many years over on ITV, until the point where it was felt that children's TV could probably do with an overhaul. This wasn't the kind of dismissive axe-wielding creative decision that we might see today; it was simply that the film spools were wearing very thin - a bit like Muffin's strings.

At the beginning of the 21st Century, British children's television became retrospective with revivals of both Andy Pandy and The Flower Pot Men. In 2005, it was Muffin's turn as Maverick Entertainment unveiled a new show focusing on the mule's exploits on a farm with other animals. Gone are the songs and clumsy string-pulled twitches in favour of story-driven animation. It's a different show for a different generation whose grandparents are no doubt tutting 'it wasn't like this in my day' and who in turn will be shushed into silence by their grandchildren, happy in the knowledge that all they want is Muffin - Muffin the Mule.

1Though often grouped with other characters from Watch with Mother, that particular name for Children's Hour only came into effect in 1953, long after Muffin had established himself as a star.