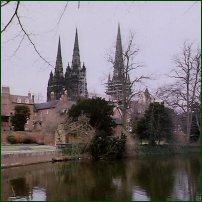 Lichfield is a small Cathedral city approximately 16 miles north of Birmingham, in the county of Staffordshire, UK. Lichfield Cathedral has a long and somewhat violent past, and was unique at the time it was built for having three spires as an original feature. The tallest spire is over 200 feet. There are a few other three-spired Cathedrals, but their spires were either later additions to the original architecture, or came about much later than Lichfield's.

The Cathedral, with its three distinct spires, dominates the landscape. Much of the surrounding areas are closely associated with the Cathedral, such as the Three Spires Shopping Centre and Minster Pool among others.

The founder of the Cathedral, Chad, later to become Saint Chad, plays an important part in Lichfield. There are schools, roads and a church all named after him.

The Cathedral first came into being back in the 7th Century when a Bishop, Chad, moved his diocese headquarters to Lichfield. Chad was Bishop for three years and converted vast numbers of people to Christianity in that time. When Chad died he was still an inspirational figure, and was made a saint. His shrine is still on view at the Cathedral today.

His body was laid to rest in a Saxon Cathedral in 700AD, and the remains of this Cathedral lie under the present Cathedral site. It was later in the 11th Century that a Norman building started to be erected to replace the Saxon church. Another Bishop, called Bishop De Clinton, decided to fortify the Cathedral about this time and planned the city in such a way that it would cater for people visiting the shrine of St Chad. In the next century work began on the Medieval Cathedral that is there today.

The choir for the Cathedral was started in 1200 and the transepts from 1220 to 1240. The construction of the nave began in 1260. Over the next century other additions would be made, including the vestibule which runs from the north Choir Isle to the Chapter House.

The Chapter House contains a medieval Pedilavium where it's said feet were washed on Maundy Thursday. The Chapter House is octagonal in shape and was built in 1249. It houses the Cathedral's treasures such as the Lichfield Gospels, which is an 8th Century manuscript. The nave was rebuilt in 1285 and what's known as the Lady Chapel was completed in 1330. This was built in order to house the shrine of St Chad.

At the height of the English Civil War in the 1640s the Cathedral suffered some major damage as it became a centre for some fierce fighting, considered by some historians to be the fiercest of the war. There were three sieges all told, and the Cathedral was devastated by a combination of war damage, troops being garrisoned there and just sheer vandalism.

It wasn't until after Charles II was restored to the throne that another Bishop, Bishop Hacket, began a massive and long-term process of restoration to bring the Cathedral back to its former state and glory.

During the 18th Century, while Lichfield prospered as a city, the Cathedral fell on hard times resulting in the 15th Century library being demolished and the contents moved to the current location above the Chapter House.

The Cathedral obtained two of its most valued treasures in the early part of the 19th Century, the first being in 1803 when Sir Brooke Boothby bought a Flemish stained glass panel from Herckenrode Abbey which was fitted in the windows of the Lady Chapel.

The second treasure was a sculpture that was done at the request of Ellen Jane Robinson. She had the sculptor, Francis Chantry, create a monument to her dead daughters. The sculpture is known as 'The Sleeping Children'.

Lichfield Cathedral has undergone various degrees of restoration right up to the present day and is a fine example of medieval architecture. Major works were carried out to the roof and central spire. The stonework inside and out was cleaned as were the majority of the various statues throughout the Cathedral.

The Cathedral is used not just for worship; it now plays host to music festivals and various music events. The music festivals range from orchestral performances to modern pop, along with other genres of music. Art and craft fairs are held there and it has hosted the BBC's Antiques Road Show. The main festival is known simply as The Lichfield Festival and usually takes place in July each year. The Lichfield Festival is a combination of all the arts and crafts brought together for one large show, it is spread over other venues in Lichfield, the Cathedral being the central focal point of the event. Events are held all year round covering a wide range of arts, crafts and music.

The area around the Cathedral has been restored and access made easier for the high numbers of visitors that visit all year round. The close and approach to the Cathedral has been refurbished with a new but traditional cobbled road and made more pedestrian friendly with traffic restricted to disabled visitors, and coaches now park on the main road away from the confines of the close. Also, the grounds around the Cathedral have been landscaped with seating areas for visitors. A tea room, information centre and gift shop have also been added for the benefit of visitors.

Various members of the Royal family have visited the Cathedral over the centuries. Queen Elizabeth II gave out traditional Maundy money in 1988, being the most high profile royal visit in recent times.

The three spires are usually lit up at night and provide a spectacular view seen from all over Lichfield and the surrounding areas.