Scoliosis Content from the guide to life, the universe and everything 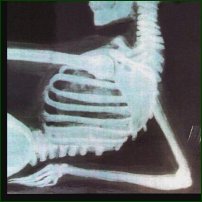 The most basic definition of scoliosis is 'curvature of the spine'. The spine is only meant to have three curves to it, giving it a 'question mark' appearance when looked at from the side. However, when looking at the spine from behind it is usually straight. In people with scoliosis, the spine takes a detour to the right or left instead of going straight from the 'tail' to the head, and in some cases the spine bends back again, forming an 'S' shape when looked at from behind. Mild scoliosis is defined as a curvature of less than 20°, with a severe scoliosis of over 70° being immediately life-threatening.

In most cases, the cause of scoliosis is unknown, and is described as idiopathic scoliosis. However, certain medical conditions such as Marfan Syndrome have scoliosis as a characteristic. Scoliosis affects more females than males, and often appears during puberty. It is thought that the causes of scoliosis may sometimes be genetic, as 25% of people with scoliosis have a relative with the condition.

The effects of scoliosis can be both physical and psychological, and may depend on the severity of the curvature.

Sometimes the physical effects are minimal, and would not be noticeable except by a medical professional. If a person has an 'S'-shaped scoliosis, then the two curves can cancel each other out so that there is no obvious appearance of a curvature, although such a problem may limit their height. However, a person's physical appearance will often indicate that they have scoliosis. Scoliosis can cause kyphosis, otherwise known as humpback. This is caused by the curvature of the spine pulling the ribs round to the front of the body, and consequently creating excess forwards curvature of the top part of the spine, which appears as a hump on the back.

People with scoliosis can experience back pain, and in severe cases breathing can be restricted because of the position of the rib cage.

Because of the deformities that can be caused by scoliosis, the psychological effects of the condition can be acute, especially in children and young people. The fact that they look different to other people, and may be bullied by other children, can affect the confidence and self-esteem of children and young people with scoliosis. Adults also may suffer from a negative view of their own body image, which, as in children, can lead to low self-esteem, affecting their confidence and ability to interact with other people.

The extent to which scoliosis can be treated depends to a large extent on the severity of the curvature, and also on the age of the person with the condition. In children, scoliosis can be corrected (to a certain extent, at least) by the insertion of a metal rod to straighten the spine. Due to the risks associated with such surgery it is only performed in severe cases, where the person's quality of life would be greatly restricted if surgery was not attempted.

In less severe cases, and sometimes following surgery, scoliosis can be corrected by the person with the condition wearing a spinal jacket (body brace), known as a Thoraco-Lumbar-Sacral Orthoses (TLSO). Again, these treatments are usually only used on children and young people, as after a person's bones stop growing it is much more difficult to alter their position, if not impossible.

If the treatment is used, the jacket or brace is usually worn 23 hours a day. As you can imagine, wearing a plaster jacket or brace is not a pleasant thing, especially for a young child, and can be hard for a parent or guardian to implement.

Exercises may also be prescribed in an attempt to correct a curvature. The success of these depends upon factors such as the age of the person and whether they can keep up the routine of doing the exercises. This is more problematic with children and teenagers, who can easily become bored with the exercises, and may not appreciate the long-term potential consequences of not doing them.

For more information and help, see the referenced sites listed in the panel to the right of this Entry.