Cavalier King Charles Spaniels Content from the guide to life, the universe and everything 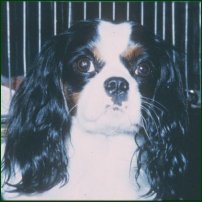 Often nicknamed 'Cavies' or 'Cavs', Cavalier King Charles Spaniels belong in the toy dog group, and make great pets due to their friendly nature, particularly for novice dog owners. Highly affectionate, they are compatible with children and the elderly and are very easy to train. Although they enjoy languishing in their owners' laps, exercise - at least an hour a day - is vital to their health. Popular in Renaissance times, and then re-bred or re-introduced in the early 20th Century, these pedigree dogs were given UK Kennel Club recognition in 1945. Since then they have been competing in the show ring and can live for 13-15 years if healthy.

These small spaniels (the largest of the Toy breeds) have short but definite muzzles, long, drop ears, large, soulful brown eyes and a silky coat. They come in the following colours: Blenheim (chestnut and pearly white1), tri-colour (black and white with tan markings), black and tan, and ruby (a golden, chestnut). Both bitches and dogs can grow to about 33cm in height and weigh between 5-8kg. Take care not to over-feed, since they tend to put on the pounds. It's easy to get muddled between the 'King Charles Spaniel' (also known as the English Toy Spaniel) and the Cavalier King Charles Spaniel - there is a difference. The Cavalier bears a greater resemblance to the Cocker Spaniel, with a longer muzzle, whereas the King Charles Spaniel is more closely related to the pug, being smaller, with a compact muzzle and slightly bulging eyes.

Although Cavaliers shed relatively little, a good weekly brush is advised to keep those pesky hairs off the furniture. No trimming is necessary (in fact it is strictly forbidden in the show ring). However, toenails and hair between the feet pads should be clipped monthly. Keeping the ears clear2 of fur balls and other objects like grass seeds is important since this dog's drop ears don't allow much air to circulate and infection can quickly develop.

Eager to please, with a constantly wagging tail, the majority of Cavaliers get on with all family members and pets. Their small size means they're easily transportable and make good travel companions. Neighbours will appreciate you owning an animal that isn't prone to barking or yapping, although the Cavalier might announce strangers. Beware though, they are not guard dogs and could quite happily get in the postman's van, viewing everyone as a friend.

Small spaniels have been popular in Britain for centuries and are thought to have been brought over from Asia originally. Back in the 11th Century, King Canute declared it illegal for anyone to hunt with a dog unable to fit through a gauge of 11 inches in diameter. Later in the 16th, 17th and 18th Centuries, Cavaliers were pictured in the work of painters such as Van Dyck, Titian, Stubbs and Gainsborough. Their royal name was added during the reign of King Charles II, who was so attached to his little spaniels that he ordered a new decree, a law that still stands in the statute books today according to several canine oriented websites3. This proclaimed that the spaniels must be allowed in any public place, including the House of Parliament4. It wasn't just the king who was besotted with these animals during that era; Cavaliers were very common as ladies' pets and made excellent 'hot water bottles', warming laps during cold carriage rides and in draughty castles. During the Great Plague in the 1600s, the dogs were used to attract the infection-spreading fleas from their mistresses so that their owners wouldn't suffer. Doctors also took to prescribing Cavaliers as a form of medication or therapy, providing the sick with 'comforte'.

This breed is unfortunately susceptible to various genetic defects, so if buying a puppy, do ask to see its parents' heart and eye certificates from the vet, as certain problems will only develop in mature dogs. Good breeders try to minimize the risk of their animals contracting these problems, by selective pairings of healthy dogs.

1According to the Kennel Club breed standard, markings should be 'evenly divided on head, leaving room between ears for much valued lozenge mark or spot (a unique characteristic of the breed)'. 2Baby wipes are exceptionally good at this. They're not at all harmful to dogs, you don't end up with water in their ears and can clean the flap of their ear at the same time. 3Such as Kennels and Petplanet.4However, on the Parliament UK site, under 'Dogs', it states: 'Dogs, except guide dogs are generally not allowed in the palace of Westminster. One present member (at the time of writing), Mr David Blunkett is blind and regularly brings his guide dog, Sadie, into the Chamber. There is absolutely no truth in the theory, often quoted to us as fact, that King Charles Spaniels are exempt from this ban.'