Ayrton Senna - Racing Legend Content from the guide to life, the universe and everything 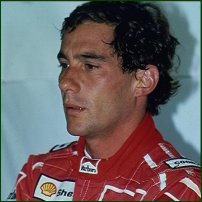 Ayrton Senna da Silva, the son of a wealthy Brazilian landowner was born 21 March, 1960 in Sao Paulo, Brazil. Tragically, he was killed taking part in the San Marino Grand Prix at Imola on 1 May, 1994. This is the story of the man who became known simply as Senna.

From a very young age, this future maestro of the track was fascinated with cars. As a child Ayrton was diagnosed as having motor coordination difficulties, so, being a racing enthusiast himself, his father saw this fascination as a means to further encourage his son and presented Ayrton with his first one-horsepower kart at the age of four. From that time on he became a different boy: less awkward, more focused and with a sudden burst of confidence which was to become almost a trademark in his later life.

With further encouragement from his father who presented with a full-sized 100cc kart, the young Ayrton entered karting competitions as soon as he was legally allowed to, at the age of thirteen; eventually he won the South American Kart Championship in 1977. He then went on to enter the World Championship. Although he was the runner-up several times, he never won at this level.

As the name da Silva is very common in Brazil, at the age of 21 years Ayrton adopted his mother's maiden name, 'Senna'. He moved to England in 1981, taking along his 19-year-old wife Liliane Vasconcelos to live in a rented bungalow near Snetterton. That year he won the British Formula Ford 1600 Championship racing for Ralph Firman and the Van Diemen team.

To continue Senna would need sponsors and, with several up-and-coming Brazilian drivers already ahead of him in the higher formulas, sponsorship money was not readily available to him. Senna announced his retirement and returned home to work for his father in Brazil.

However, after four months at home, Ayrton's passion for driving began to burn once more and so he made the decision to return to motor racing. Having been brought up in the life of luxury, Liliane knew that life would be a struggle with a husband so focused on his career. She refused to follow him and a mutual separation was agreed: the marriage was ended after less than a year.

In 1982, with partial sponsorship from his father and a Brazilian bank, Senna returned for another year of racing by joining the Russel Green Racing team. He went on to take the British Formula Ford 1600 Championship after 22 wins. He also won the European Formula Ford 2000 Championship that year.

Now it was the time for Senna to move up into the British Formula 3 Championship, where he joined West Surrey Racing. Speculation was rife making Senna and Martin Brundle the 1983 pre-season favourites for winning this Championship and both of them fought hard for their points. The Championship would be decided at the final race at Thruxton.

Showing his determination to win, Senna had his engine rebuilt and tuned by Novamotor. Confident in his vehicle, Senna went on to win pole position, the race and the Championship.

The end-of-season celebrations were finished at the Macau Grand Prix with drivers from all the national series competing. Senna went on to win, thus opening up serious negotiations with a number of Formula One teams.

Senna really wanted to go to Brabham, unfortunately Nelson Piquet, Brabham's leading driver, vetoed the move, leaving Senna with the Toleman Hart team as his only option. This was Ayrton's introduction to the politics behind Formula 1 and a lesson he learned well, ensuring he was never left on the outside of negotiations again.

During the next ten years Senna was a dominating feature of Formula 1. He went on to drive for Lotus, McLaren and finally Williams. He obtained a total of 41 wins1, the first was in Portugal in 1985.

Find out more in Ayrton Senna - The Formula 1 Years

Some will never forget that disastrous weekend. It began with the launching of Rubens Barrichello's car onto the tyre wall during the Friday afternoon's practice; the force of the impact was sufficient to keep Barrichello out of the race on Sunday.

Then the following day, Saturday, Senna's young friend Roland Ratzenberger was killed during practice. This upset Senna so much that on the morning of the race, he began to talk to other drivers to arrange a meeting about safety. He also accepted the role of leader in an effort to create a Driver's Safety group. Senna even approached his old protagonist Alain Prost and apologised for his manoeuvre that put Prost out of contention and handing the Championship to Senna, which had been a contentious issue between the two drivers for a number of years, asking that he be able to meet with Prost the following day.

At the beginning of the race there was a crash between JJ Lehto and Pedro Lamy bringing out the Safety Car2 for several laps. When the racing resumed it was during the second lap of the restart that Ayrton Senna left the track at the Tamburello corner. The race was red-flagged3 almost immediately as marshals and medics at the trackside attempted to revive him. A helicopter landed on the track to take him to hospital. The race was restarted, with none of the drivers fully aware of the seriousness of Senna's condition.

Some hours later it was reported on news channels that Ayrton Senna was on a life support machine. His parents rushed to his bedside and with advice from the doctors, they agreed to remove life support. Ayrton Senna was dead at the age of 34 years. The Brazilians went into a massive and immediate mourning for the loss of one of their most famous sons.

Senna was a deeply private and religious man. The Austrian flag was found in the wreckage of his Williams car. He was racing for Ratzenberger that day. This was not the first act of compassion he had shown for his fellow drivers: during the free practice at Spa, Belgium, in 1992 Senna left his vehicle to run to the aid of Erik Comas after he had crashed on the back straight. Risking his own life, Senna ran onto the track as other cars sped past, hitting the electronic kill switch to turn off the engine in Comas's car to prevent a fire.

At the same track the following year, he stopped his car on the track and went to the aid of Alessandro Zanardi.

Ayrton Senna may never have been everyone's favourite driving personality, as one of the world's greatest Formula 1 drivers, but he was a truly charismatic one. He had won three World Championships in Formula 1, sometimes by some very dubious means. Love him or loathe him, he could never be ignored. His death shocked the world and even today there are those who still cannot believe it happened.

It was only after his death was it revealed that Senna had donated millions of dollars to children's charities over the years. Something which belied the 'playboy' image the tabloid press and magazines perpetuated of him. Shortly after his death his family launched The Ayrton Senna Foundation, a charity set up to continue the good works for children that Ayrton Senna strove to keep so very secret from the rest of the world.

Ayrton's nephew, Bruno Senna, is currently competing in the British Formula 3 series. It is rumoured the 22-year-old is being groomed for Formula 1 by Ayrton's former team-mate and friend Gerhard Berger.

1Surpassed by Michael Shumacher in Sept 2000 at another race marred by the death of a fire marshal at the second chicane at Imola.2The Safety Car is deployed when it is deemed unnecessary to stop the race, but debris or vehicles need removing from the trackside. This is for the track marshals to work in safety.3Red for Danger. This flag informs the drivers the race has been stopped and to make their way slowly back to pitlane, or even be prepared to stop on the track.