A Mission From God: The Future of the Blues Content from the guide to life, the universe and everything

Down where the Southern Cross the Dog: The Beginnings of the Blues | Those Low Down Country Blues: The Mississippi Blues | Me and the Devil Blues: Robert Johnson and His Legacy | Sweethome Chicago: Electrifying the Blues | Newport and All That Jazz: How the Blues Came to the World | A Mission From God: The Future of the Blues 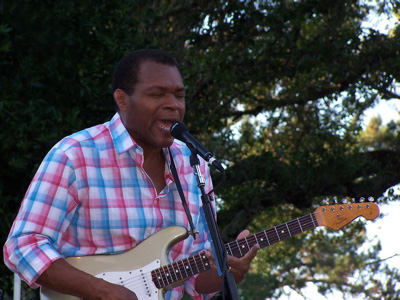 Jake had a dream - it had always been the Blues.
- publicity material for the Blues Brothers.

By the time Dan Aykroyd, John Belushi and director John Landis began to convert a series of Saturday Night Live sketches about a pair of itinerant blues musicians into a movie, the blues itself was staggering slowly into a decline. Muddy Waters had recorded a series of bravura albums under the watchful eye of Texan blues rocker Johnny Winter. BB King, seemingly forgotten by white audiences for most of the 1960s, finally broke through into stardom in the 1970s.

But elsewhere things were not so good. Freddie King, one of the most popular live draws and recording artists of the 1960s and 1970s, died at the age of only 42 - and repeated attempts by Albert King to capture a market he had all but dominated in the late sixties repeatedly failed. John Lee Hooker was fighting and losing a battle with the bottle which was destroying his ability to play and perform. Success in the blues during the seventies was an isolated phenomenon rather than a general one. And it was difficult to see where any new generation of players was to come from - young blacks did not want to play the blues, they wanted to play soul or funk, and the new sounds of Detroit techno and hip-hop were beginning to penetrate a mass market for the first time.

It was into this arena that Belushi and Aykroyd stepped. Their methodology was simple. They knew that the script they had was a winner, and so they set about assembling a band that was, in the words of the film itself 'powerful enough to turn goat's piss into gasoline'. The centrepiece of the band was lead guitarist Matt 'Guitar' Murphy, who during the late 40s and 50s had played with Howlin' Wolf and had gone on to play in a succession of great blues bands, as well as two former members of Booker T and the MGs, Steve 'The Colonel' Cropper and Donald 'Duck' Dunn.

With their invigorating mix of blues, soul and gospel music, the film was a shot in the arm for a beleaguered industry. John Lee Hooker, who had dried out in 1977, was given a musical number to himself, fronting Muddy Waters' band in a Maxwell Street Jam. It was to kick-start possibly the most remarkable phase in his long career.

The Healer: The Second Coming of John Lee Hooker

After his appearance in the Blues Brothers movie, Hooker all but disappeared into the crowd again. The most prolific of recording artists during his heyday in the 1950s and 1960s, Hooker was without a recording contract and by all accounts uninterested in obtaining one. In 1986 he recorded one album, but that was released by a small independent label and almost immediately disappeared again.

In the late 1980s, however, Hooker signed with the Rosebud management agency, and very quickly they put his career into a huge turnaround. The first step was the 1989 album, The Healer. The idea was simple - collect a number of John Lee Hooker's fans and disciples and have them record an album with him. The idea was so successful that between 1989 and his death in 2001, Hooker recorded a series of albums featuring blues and rock stars from three generations – musicians as diverse as Los Lobos, Keith Richards, Booker T (of MGs fame), Robert Cray, Ry Cooder and Johnny Winter all queued up to pay homage to the Boogie Man.

Spearheaded by singles recorded with Latino guitar maestro Carlos Santana ('The Healer') and country blues legend Bonnie Raitt ('In The Mood'), 'The Healer' galvanised the blues industry like little before it. Within a couple of years, figures such as Buddy Guy (who had been without a recording contract for 15 years), Albert Collins, (who had sworn off recording contracts altogether) and Johnny Winter were riding high on a wave of popularity that led not only to increased record sales but blues festivals all over the world that tens of thousands of blues fans attended.

In the wake of such success, it was not long before new and exciting projects came into being. One of the first of the new breed of blues stars was John Spencer, a young musician from New York State who had fronted the 'hate-f*** band' Pussy Galore. That band exploded in 1985, but in 1992 Jon Spencer put together his Blues Explosion, with a line-up of two guitars and drums that was to become extremely influential as the decade wore on.

Spencer was not content with playing just the blues however – he brought influences from hip-hop and funk to the band, as well as more traditional rhythm and blues stylings. For all that, however, the power of the blues lives on in Jon Spencer's music and is as raw and powerful as anything recorded by Charlie Patton or John Lee Hooker.

Within a very short time, the band was attracting considerable word of mouth and in the course of one afternoon in February 1996 cut one of the most important blues albums of the 1990s, 'Ass Pocket Of Whisky,' with blues veteran RL Burnside.

Fat Possum was a small independent label that specialised in recording local blues musicians in and around Oxford, Mississippi. Burnside was a gift to them. Despite being a traditional blues player of some considerable skill, Burnside was as aware as anybody that the blues was badly in need of new ideas. He made himself available to record with Jon Spencer in 1996, and then set about recording a remarkable series of albums that saw him stray from the traditional amplified blues of 'Mr Wizard' to the sampled and synthesised album 'Come On In', produced by Tom Rothrock, best known for his association with Beck.

'Come On In' paid immediate dividends as the sampled and world-weary Burnside, singing the simple refrain 'It's Bad Y'Know,' was featured prominently in the first series of surprise TV hit The Sopranos. As Burnside approaches his 80th birthday he refuses to give way to blues purists who object to his approach to blues, saying of their preference for a smoother, more traditional sound:

Those are the kind of blues some people like to listen to. But them aren't the real blues. The real blues started from that rough sound, and that's how I play it.

One of Burnside's more extraordinary labelmates is the self styled Taildragger, from Greenville, Mississippi, T Model Ford. Ford was approaching 75 when he first recorded for fat Possum. He is illiterate and at that advanced age was still playing anything up to eight hours a night on street corners just in the same way Charlie Patton and Robert Johnson did. He is also a convicted murderer and a very angry man - one of his songs features the refrain:

I feel so bad
I feel like breakin' somebody's arm.

Ford's blues, played with just an amplified guitar and a basic drum kit, are as authentic as they come, and between them both Burnside and Ford represent the future and the past of the blues as well as perhaps anybody might. They, along with other artists on the Fat Possum label - recently described by no less an authority than Iggy Pop as 'the only decent record company in this country; the only ones putting out consistently good product' - look set to ensure that the blues remain close to their authentic roots.

However, others round the world are set to carry the blues in a whole new direction. Perhaps the most extraordinary of these is Skip McDonald and his band, Little Axe.

Back to the Crossroads: Little Axe.

Little Axe1 are a group of musicians centered around guitarist and vocalist Skip McDonald, along with bassist Doug Wimbush and drummer Keith LeBlanc. The trio first made their names as the house band for Sugarhill records, providing the musical backing for such rap classics as 'White Lines', 'The Message' and many more besides. In the 1980s, together with London-based dub wizard Adrian Sherwood, they formed the TackHead Sound System, and in 1994 rearranged themselves yet again to form Little Axe.

Skip McDonald is a blues player of some considerable skill and passion, and in Little Axe he has a remarkable band that has become unique in the world - a dub/blues fusion with a blues sensibility and a dub reggae beat. For their first album they also added internationally-acclaimed Indian percussionist Talvin Singh to their already heady brew of blues, soul, gospel and funk.

Of course, the blues purists who so hated Burnside's experiments with rap production techniques were no more fond of Little Axe's technique and sound, yet it is obvious for all to hear that the spirit of the blues is alive and well in the 21st century with such innovative characters as Skip McDonald.

In fact, it is arguable that the blues enjoy a higher profile now that they have done in some in some time - popular artists such as The White Stripes build on Jon Spencer's no-bass philosophy to create their own garage blues, and techno-wizard Moby made considerable use of blues themes and samples for his multi-platinum 'Play' album. With a wealth of old and new material of both traditional and experimental origin, blues fans have rarely, if ever, enjoyed such a huge range of sounds. It is as John Lee Hooker once told a well wisher:

1Named after a Bob Marley song.