The Novels of Bret Easton Ellis Content from the guide to life, the universe and everything 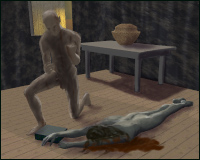 Bret Easton Ellis was born on 7 March, 1964, to an affluent Los Angeles family. His upbringing in the privileged world of the California elite, combined with the literary influences of such authors as Ernest Hemingway and Joan Didion, would lead him to write scathing satires of the glamorous world he observed from the inside. He has since been recognised as one of the most incisive and original modern American writers. This entry looks at each of Ellis's novels up to the time of writing.

Ellis's first novel, published while the 21-year-old author was still attending Bennington College in Vermont, is an account of a jaded college student's return to his Los Angeles home over Christmas vacation. The protagonist, Clay, is forced to mix with his high-school friends after the prolonged separation of the school year, and finds himself drawn into bizarre and disturbing situations. Everything from lunch at expensive restaurants to his best friend's transformation into a prostitute is filtered through the same disaffected haze that was to become a strong motif in much of Ellis's work.

On a continuing depraved college student theme, Ellis's next work turns his nihilistic lens on the sexual ties that bind a group of youths at his fictional Camden College. Main characters Lauren, Sean and Paul interact through webs of delusion, desire, ego and envy in an atmosphere of bored hedonism where freshman suicide achieves cliché status. Through the characters' heart-rendingly human desperation, Ellis displays a more sympathetic realism. The absurdity of life comes through in signature style, but with more of a sense of humour than horror. It is also in this book that Ellis establishes a set of characters who recur in his later works, though their personalities do not appear to be consistent throughout.

This is Not An Exit.

Undisputedly Ellis's most infamous work, American Psycho suffered the slings and arrows of an outraged public for its extremely graphic depictions of murder, mutilation and torture, visited with particular atrocity upon women. These scenes, though responsible for a great deal of hype and controversy, make up a relatively small part of the novel. In fact, arguably the most fascinating aspect of this work is how such shocking scenes can be all but negated by the rest of the narrative. Ellis spends most of the novel sadistically numbing the reader's psyche with a droning, obsessively-detailed first-person account of protagonist Patrick Bateman's day-to-day life as a successful and physically flawless Wall Street executive. The model for Bateman's hollow, unfulfilling fixation on status and image was very close to home; in Julian Murphet's reader's guide to American Psycho, Ellis is quoted describing the book as 'my send-off to my dad'.

You're Tan But You Don't Look Happy.

The Informers could be read as a more mature continuation and refinement of the satirical style explored in The Rules of Attraction. Consisting once again of a collection of first-person narratives from interrelating characters, the book does little to break new ground. Elements of family, drugs, youth and violence are present, with a purified sense of coldness. The absence of a clear protagonist or a traditional storyline gives the effect of a series of windows into the most banal, shallow and reprehensible elements of Los Angeles 'culture'; an entity whose very existence, or at least relevance, Ellis seems bent on disproving.

It's What You Don't Know That Matters Most.

Weighing in at an epic 482 pages, Glamorama follows the tragic descent of a young man from a successful life as fashion model and trendy club owner into the violent (but still well-dressed) world of international terrorism. Really. The novel is rife with scenes of superficial glamour overlying the sickly realities of life in vogue. As the plot evolves, wrenching passages of ultraviolence periodically splatter across the glittering veneer, all narrated by an uncomprehending and frightened protagonist who, while eminently unlikeable and unabashedly absurd, is still troublingly human. Victor, like the reader, is a hapless witness swept along on errands of kidnapping, bombings and torture, then straight to the evening's hippest parties. The geographical and emotional scale of this novel is arguably the grandest in any of Ellis's works, as Victor's unfortunate journey spans the globe and shatters the limits of his endurance, straining the reader's along the way.