Hi there, ... I'm Merdo the Grey, the parton of fuzzy thinking.

Where did Merdo the Grey come from?

Merdo The Grey was born in 1946 c.e., somewhere in the middle west (if you are standing in NY with your face to the north and pointing to your left. Facing south it would be the far far east,or something.

Where was he going?

After an extended period of youthful exploring anywhere he could get to, from the far south, the middle south, the far west and the far east, he migrated first to the middle north and then to the far north,

where he decided to stay, not because of the scenery, but because his feet had frozen to the ground due to unguarded spitting in public.
... And what possible relevance does that have to anything?

He stayed in the far north, but gave up spitting. Merdo the parton1 of fuzzy thinking Merdo the grey derives his name from a 1960's epithet that was bestowed on him after he was selected for the task of latrine maintenance at a hippy commune that will forever remain nameless.

His educational training dates from the paeleolithic era in various subjects of art, archaeology, social anthropology, and fuzzy thinking.

Although born and raised as an off-piste American he renounced the American religion in the early nineteen-sixties and later became a guru of the expatriot faith abroad.

Merdo the grey is now an agent of the Norwegian Government, working with minorities and immigrations issues and to a certain extent with graphic design and computer networks (trying to establish and maintain the intragallactic PAP (Psychotic applications protocol) network.

His sucess in this area has, however been rather dissapointing.

Merdo came across the H2G2 community during the tumultous and penultimate throes of the last century as researcher 157456 at U157456 But left again in 2002 for reasons not even he can yet comprehend.

Since his reentry in june 2005 into the h2g2 atmosphere, he has been attempting to resolve this "merdo-syclastic infundibulism" but hasn't gotten too far as yet.

My approach to the H2G2 research effort is simple enough ... rely on my superiors! I have, therefore, engaged one of my superiors as field research assistant (field ass., for short) her name is Felicia...

Felicia is very good at arial research, too, with a particular knack for the rain-forest canopy sort of work. But it is her intellectual skills that are most impressive

Even then we have had some problems doing the sort of down-to-earth nitty-gritty kind of hands-on research H2G2 really needs, so the whole team engaged an "ass. field ass." for the foot work: an incredibly gifted field worker in the area of rodent recycling. Her name is Willy, or more appropriately Villig... ...

Sooo ... here we all are, sitting around in the research lab one Saturday morning, wondering how this incredible galactic research team could get even better ... And Villig suggested ... as her cutting mind usually does ... the only possible, reasonable solution to any difficult question ...Let's have some 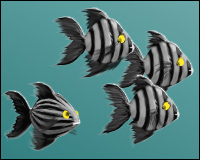 So on Monday morning we hired a new Management group ... for our field research unit ...

Ever since then, (about a six years ago) we've become the most acute research unit at H2G2. We have'nt published much, but we're having a good time.

Merdo the Grey, the parton of fuzzy thinking