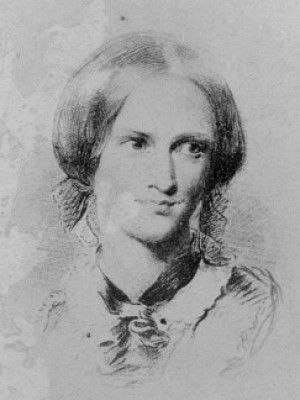 Charlotte Brontë was the eldest of the three Brontë sisters who became famous as authors. During her short lifetime (she was born on 21 April, 1816, and died on 31 March, 1855, at the age of just 38) she wrote various short stories and poems, plus four novels, including the novel Jane Eyre that she is best known for. Villette, the last novel Charlotte completed during her lifetime, was published in 1853. The story is presented as the memoir of Lucy Snowe, an orphan who became a teacher.

The narrative begins when Lucy is living with her godmother, Mrs Bretton. Mrs Bretton takes in Paulina Home, a precocious six-year-old child whose mother has just died and whose father is ill (Paulina's parents had previously separated 'by mutual consent, not after any legal process'). Mrs Bretton's 16-year-old son Graham had been away at school but returns home and teases Polly (as Paulina is known), for example picking her up and lifting her over his head. He tries to blackmail her into giving him a kiss, so she punches his face with her 'miniature fist'. Later she is comforted by him and likes to look after 'my dear boy'. When Polly is able to rejoin her father and leave Mrs Bretton’s house, Lucy leaves soon after. Lucy becomes a carer for Miss Marchmont, whose fiancé Frank had died in an accident 30 years previously. When Miss Marchmont is reunited with Frank, Lucy goes to London and decides to travel to France.

During the voyage across the Channel, Lucy meets Miss Ginevra Fanshawe, who is travelling to a school in the town of Villette, to study with a Madame Beck. Villette ('Little Town') is 'the great capital of the great kingdom of Labassecour1'.

Not knowing what else to do, Lucy decides to travel to Villette as well. However, the trunk with all her belongings in it gets left behind. During her search for an inn where she can spend the night, Lucy coincidentally finds Madame Beck’s school. Madame Beck is coincidentally in need of a new English governess, so Lucy is employed2. Initially she works with the younger children and does sewing at the same time as listening to them reading out loud, but then successfully takes on a class of 60 rebellious students and becomes a teacher.

When one of the children has an accident, a doctor attends (coincidentally the same English gentleman that Lucy had met on arrival in Villette when she discovered her trunk was missing). Dr John (as he is known) is in love with Ginevra Fanshawe, but Ginevra does not love him. Although Lucy loves him in a way, she helps him in his schemes to win Ginevra's heart until he realises Ginevra is not worthy of his love.

During the long school summer holiday, Lucy becomes ill with loneliness. She visits a Catholic Church and speaks to a priest in a confession box, but confesses she is Protestant. She feels better having spoken to someone about her feelings, but is then caught in a storm and can't find her way back to the school. Further coincidences occur, which reunite Lucy with her godmother, Graham and Polly3.

When the next school year commences, Lucy grows to love her fellow teacher Professor Paul Emanuel. Monsieur Paul (as he is known) was once engaged to be married, but his relatives disapproved when they found out his fiancée was not rich. Rather than defying the disapproval, his beloved became a nun and died young. He is a Catholic and the priest who is his spiritual director disapproves of him associating with a 'heretic' Protestant. Monsieur Paul tries to encourage Lucy to convert to Catholicism, but she is not impressed by the pamphlet he gives her. The priest arranges for him to travel abroad for three years in the hope that he would forget about Lucy. Whether the ending is happy or sad is left to the reader's imagination.

In many ways the novel is a reworking of The Professor, being inspired by Charlotte's stay in Brussels. It also includes themes previously covered in Jane Eyre and Shirley, such as passages in French and mention of phrenology (judging people by the shape of their heads). For example, Lucy muses, 'Labassecouriens must have a large organ of philoprogenitiveness: at least the indulgence of offspring is carried by them to excessive lengths' and she encounters 'Rosine - a young lady in whose skull the organs of reverence and reserve were not largely developed'. Charlotte's attitude to Catholicism again features, but in a more nuanced way (when Charlotte was lonely in Brussels, she had visited a Catholic Church as Lucy does in this novel).

There are other autobiographical elements in the story. Like Charlotte, Lucy is not conventionally pretty by the standards of the time. Her behaviour is not conventional, either, as she notes: 'Whatever my powers - feminine or the contrary - God had given them, and I felt resolute to be ashamed of no faculty of his bestowal.' She has a vivid imagination, while outwardly she often appears frosty4.

I seemed to hold two lives - the life of thought, and that of reality; and, provided the former was nourished with a sufficiency of the strange necromantic joys of fancy, the privileges of the latter might remain limited to daily bread, hourly work, and a roof of shelter.

There are other episodes in the novel that consider the role of women in society. For example, when we first meet her, Ginevra Fanshawe is a young woman travelling alone. Lucy notes:

By some their intrepidity is pronounced masculine and 'inconvenant' [unseemly], others regard them as the passive victims of an educational and theological system which wantonly dispenses with proper 'surveillance'.

When Lucy is promoted to be a teacher, she notes the differential treatment of male and female staff: 'Madame raised my salary; but she got thrice the work out of me she had extracted from Mr Wilson, at half the expense.' However, she also notes: 'I was not accustomed to find in women or girls any power of self-control, or strength of self-denial.'

Villette received mixed views when it was first published. Some criticised it for being 'almost intolerably painful' and not inspiring 'a man's true love'. Others recognised its 'charm of freshness' compared with typical novels written by female authors at the time. Charlotte even received letters from readers who appreciated Lucy's depth of character and found the book to be a consolation in grief.

The ambiguous ending has provoked much discussion in the years since the novel was published, and was even debated before its publication. In a letter to her publisher about the planned novel, Charlotte wrote, 'I never meant to appoint her lines in pleasant places', indicating that she did not intend for Lucy's story to have a happy ending. However, Charlotte's father read the manuscript before it was sent to the publisher. Charlotte's biographer Elizabeth Gaskell noted 'he disliked novels which left a melancholy impression on the mind' and wanted an ending in which the heroine could 'marry, and live very happily ever after'. The compromise was for Charlotte to invite the reader to imagine the ending.

To date (2022), although no films of Villette have been made, the novel has been adapted into a television miniseries twice (one in 1957, and another in 1970). The novel has also been studied by academics. Thus Villette plays as important a role in English Literature as Charlotte's other novels.

Image of Charlotte courtesy of the Library of Congress

1La basse-cour is 'farmyard' in French. The kingdom is modelled on Belgium, a country that Charlotte had a very low opinion of following her visits there in 1841-43.2This echoes the episode in Jane Eyre when Jane loses her belongings and coincidentally finds relatives she never knew she had.3Polly turns out to be the cousin of Ginevra, too.4In the first draft of the novel she was named 'Lucy Frost'.