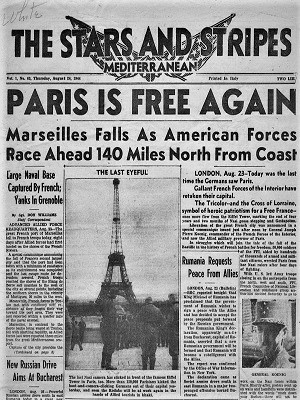 How ya gonna keep 'em down on the farm

The year: 1945. The place: Paris, City of Lights. Now liberated and recovering from the rigours of the Second World War. Cafés have reopened. Families have been reunited. The boulevards are now free of Nazis.

Unfortunately, the boulevards are now infested with young American GIs.

There are 1.5m US soldiers in Europe. They have a lot to do, now that the war is over: help administer occupied Germany, chase down Nazi ringleaders, and relocate as many as possible of the estimated 7m DPs (Displaced Persons) who are in the wrong part of Europe and want to go home. It's a big job, and most of the soldiers are in the 18-25-year-old range. And they don't understand the French. The French return the compliment.

The War Department, particularly the Office of War Information, has an unusual solution to problems of cross-cultural misunderstanding. They call an anthropologist. Arguably the most famous of the time: Margaret Mead (1901-1978), whose books Coming of Age in Samoa ((1928) and Sex and Temperament in Three Primitive Societies (1935) had not only put anthropology on the public map, so to speak, but made it sexy. Maybe she could help explain the French?

Margaret Mead was busy trying to explain the British to Americans, a task she found daunting partly because she was an Anglophile herself. She suggested they contact her brother-in-law, who was working at the Office of War Information. In fact, he was stationed in Paris. His name? Leo Rosten.

Leo Rosten wasn't an anthropologist. He just happened to be married to Margaret Mead's sister. But he had credentials when it came to cross-cultural encounters. He was born in Poland. He grew up bilingual (Yiddish and English) in multicultural Chicago. During the Depression, he taught English to immigrants in night school. This experience supplied the material for his popular 1937 book, The Education of H*Y*M*A*N K*A*P*L*A*N. It's a very funny and sympathetic book about immigrants wrestling with the English language.

Rosten was a lifelong Anglophile himself and affected a cosmopolitan air. His response to the need to educate a different variety of alien came in the form of a book directed at US military personnel. 200,000 copies were printed. The book's title was 112 Gripes About the French, and it's a fascinating read. The book is full of interesting background that tells us surprising things about the French – and the Americans of 1945.

A Look at Franco-American History

The first set of 'gripes' Leo Rosten addresses are the ones that contribute to the attitude that the Americans are doing the French a big favour by liberating them from the Nazis. 'We're always pulling the French out of a jam,' the book reads. 'Did they ever do anything for us?'

'They did,' the book replies.

They helped us out of one of the greatest jams we were ever in. During the American revolution, when almost the entire world stood by in 'non intervention' or was against us, it was France who was our greatest ally and benefactor. France loaned the thirteen states $6,000,000 – and gave us over $3,000,000 more. (That was a lot more money in those days than it is now.)

45,000 Frenchmen volunteered in the army of George Washington. They crossed the Atlantic Ocean in small boats that took two months to make the voyage.

This would make sense to the soldiers. They'd all made the crossing to France in ships, and they didn't enjoy it one bit. Imagining a two-month sailing journey would go a long way toward engendering appreciation for Lafayette and his volunteers.

Rosten's book also explains, in plain terms, why the troops' presence in Europe is not a purely altruistic exercise. American interests are involved. Americans can't be safe with an enemy in control of the Atlantic Ocean. The French are our allies.

In response to the question, 'What did these frogs ever contribute to the world anyway?' Rosten appends a list of French writers, philosophers, historians, explorers, inventors, scientists and musicians. Also a list of things invented by the French, including the sewing machine and the 1000-line television screen.

'I'd like the French a lot better if they were cleaner.'

Rosten makes a point of explaining that wartime conditions have made it hard to bathe regularly. He answers complaints about French plumbing by pointing out to the urban young folk that the US hasn't caught up in that regard yet, either.

Incidentally, 9,400,000 homes in the US do not have electricity, 80% of the farmhouses do not have bathrooms and running water. About 3,607, 724 homes do not have private flushing toilets.

One can only admire the precision of 'about 3,607,724 homes'. Where did this information come from? Remember, Rosten couldn't google it. He simply asked the Census Bureau. They used to collect data like that, and Congress didn't even make speeches about it.

Rosten reminds his readers that poverty has a lot to do with the ability to maintain hygiene standards.

The French have a lower living standard than we in the United States. (So do the Poles, the Russians, the Greeks, the Yugoslavs, the Chinese, the Mexicans, the Hindus, the Turks, and most of the other peoples of the world.) 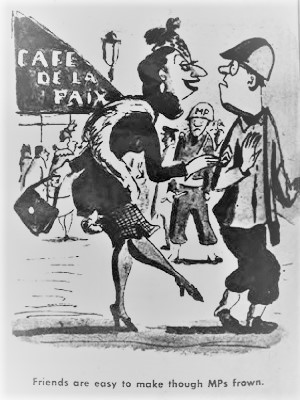 The soldiers think the French drink too much. Rosten: 'The French think we do.' He follows this up with statistics on how much Americans drank in the 1940s. He points out that this is hard liquor, mind you, not the wonderful wine the French grow themselves. Take that.

'French women are easy pick-ups.' It might be good not to judge all the women in the country by the ones willing to hang around army camps.

The French versus the Germans

The rhetoric gets a bit heated here. Obviously, all of Europe and North America were angry at what Germany had done. They were disinclined to give the people there any credit at all. But here, Rosten's multiculturalism seems to have failed him. For all his access to the census records, he seems not to have noticed that for many American soldiers, German language and customs were likely to be far more familiar than that of any other country besides Italy. Those countries may have been 'enemy territory', but they were also where their ancestors came from. But then, it hadn't been fashionable to be German since 1917.

An interesting aside: while Leo Rosten was busy convincing GIs that French people were more acceptable than German people, Yank: The Army Weekly was reporting that the authorities had been forced to lift the ban on 'fraternization' with the Germans. American soldiers had not only been dating German women, but also visiting (illicitly) in German homes.

Even before the ban was lifted, for example, one 10th Armored soldier was arrested in a Garmisch-Partenkirchen home where he had been living for two months...he came to the house almost every evening on off-duty hours, played checkers with the old man, teased the kids and sat on the sofa with one or both of the two grown-up daughters. At bedtime he went to sleep in his own private room in the house, which had clean sheets and hot water and no other GIs to keep him awake.
Yank, the Army Weekly, vol 4, no 11, 31 August, 1945

Still, Rosten probably had a point when he said that of course the Germans were 'nicer' to the soldiers. They were being occupied and didn't want to get into trouble. The French could afford to be more independent. 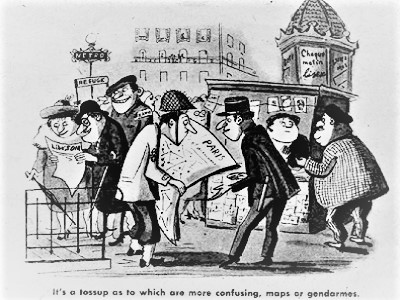 The book addresses French soldiers: no, they didn't win the war single-handed. But they played an important role. And yes, we gave them the uniforms. They were supposed to get them from the Germans?

'The French were all collaborators.' No, they weren't: ever heard of the Resistance? They smuggled 4,000 American airmen and parachutists out of the country.

The black market is dealt with: yes, it's a terrible thing. But it was a weapon against the German occupiers. Give them time.

'We're being cheated in shops': no, things are just expensive. Why would you expect French perfume to be cheap when it isn't anywhere else?

'From the looks of Paris, France had an easy war.' No, no, they didn't. The book offers some statistics about what it cost them.

Finally: 'French politicians are corrupt.' 'That's what the Germans said,' so it must not be true. Besides, they're trying. And no, they're not too radical. Okay, yeah, the Communists have 17 seats in the Chamber of Deputies. Hey, quick, let's talk about something else.

'France is a decadent nation.'

How does one measure decadence?

The Germans said, 'Democracies are decadent.'

Mr Leo Rosten went on to write a book about psychiatrists during the Second World War called Captain Newman, MD. The book sold well and was made into a film starring Gregory Peck. Rosten's story about H*Y*M*A*N K*A*P*L*A*N, who wrote his name that way because in America, everyone was Somebody, was turned into a musical. Unfortunately, the musical premiered on Broadway the night of the assassination of Martin Luther King, Jr. The show folded as New Yorkers rushed home to avoid rioting.

In 1994, 112 Gripes About the French was reprinted in the US to commemorate the 50th anniversary of the liberation of France. A French translation was also published. The French version sold much better.

However, the book is not without influence in the US military. In 2012, the Air & Space Power Journal published an article by Col Jim Drape, USAF, entitled, 'Building Global Partnerships:
112 Gripes about the French Revisited.' Col Drape uses direct quotations from Rosten's 1945 work to counter prejudices he still finds among US airmen in France. It's a small world and a shorter history than we think.

The original work is available to read online, courtesy of the Marshall Foundation.