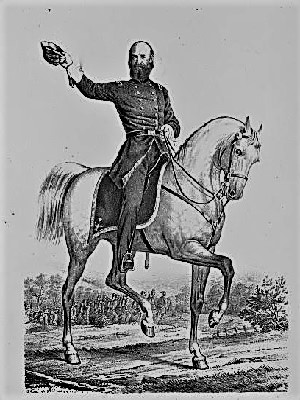 True or false? A Union general in the US Civil War was a German communist.

True, of course (or we wouldn't be talking about it). Not only was General August Willich of Cincinnati, Ohio, a communist, but he once challenged Karl Marx himself to a duel. Communists: more interesting than you might think.

The fight started in London, but the duel had to be fought in Belgium. (Spoiler alert) Marx didn't fight the duel, but his friend and proxy did, and lost.

Postmortem for a Failed Revolution

In the early 1850s, there were a lot of disgruntled German political agitators in London. The main reason for this was the failure of the revolutions of 1848. During that year, uprisings had broken out all over Europe, only to be shot down in flames (sometimes literally). The leaders of these failed revolutions fled to uninvolved countries, such as the UK or US.

One of these instigators was the former Prussian army officer turned firebrand, August Willich (1810-1878). Born Johann August Ernst von Willich, the convinced republican had resigned from the military in 1846 and discarded the noble 'von' from his name the following year. In 1848, he and his supporters (who included Friedrich Engels) stormed the Cologne Town Hall. When that didn't bring about the revolution, they went down to Baden and the Palatinate. All of this activity got them into trouble, so they moved to London, where Willich spent a lot of time arguing with Karl Marx.

A lot has been written about successful revolutions: the historic moments when the revolutionaries took their oaths or signed their manifestos, the camaraderie, the stirring songs they sang, and their loyalty to each other and The Cause. When revolutions fail, the participants usually spend a lot of time bickering among themselves as to whose fault it was.

Marx didn't think much of the '48ers, and he said so – loudly, often, and in less than delicate terms. He particularly did not like August Willich. Willich was more charismatic than Marx. He had actual military credentials. Unlike Marx, he didn't spend all day in the library and all evening lecturing beer drinkers (and then quizzing them to see if they'd understood). Even worse, Marx suspected Willich of seriously flirting with Marx's wife, Jenny.

So Marx wrote what one historian calls a 'mean pamphlet'. It was called The Knight of Noble Consciousness and was published in New York in 1854. In it, Marx waxes sarcastic about Willich's qualities as a leader. The discerning reader may detect some jealousy there. He also gives his version of the duel.

Come See the Violence Inherent in the System

Willich writes me the funniest letters; I do not reply, but this does not prevent him from describing his latest plans for a revolution. He has appointed me to revolutionise the Cologne garrison!!! The other day we laughed till the tears came. His idiocy will spell disaster for countless people yet…

Marx had been very critical of the way Willich and his fellow revolutionaries had handled the 1848 uprisings in Cologne. He accused them of bungling and acting in bad faith. Willich accused Marx of exaggeration and outright lies. He and his supporters felt that Marx was insufficiently enthusiastic about the common people's revolution. He was right, in a way: Marx had decided that the time for violent action had not yet come. He was busy writing Das Kapital, which he believed would serve as a basis – all three volumes of it – for the eventual triumph of his economic theory, once capitalism had run its inevitable course to ruin. In the meantime, both parties were more than willing to hurl recriminations at each other.

At one meeting, tempers got badly frayed. While Marx was out of the room, a friend of his, Konrad Schramm, challenged Willich to a duel. At least, that's what Marx says. What he doesn't mention is that Willich had challenged Marx to a duel, but Marx had declined. (As a student, Marx had once fought a duel.) Willich agreed to the duel with Schramm. Since duelling was illegal in England, they went to Belgium to do the deed.

Willich was an experienced soldier. Schramm was not. Schramm's pistol shot missed, but Willich's grazed Schramm's head. According to Schramm's second, a Polish former officer,

'I remained with Schramm because we had no doctor,...washed and bandaged his wound, paying no attention to the seven persons who were haymaking nearby, who had witnessed the duel, and who could have become dangerous for me.

– Quoted in Karl Marx, The Knight of Noble Consciousness

Nobody was arrested, and nobody died, and they were still arguing about it a year later. We could be forgiven for thinking, 'No wonder these people didn't overthrow any governments in 1848.'

Many of the Germans there were '48ers who supported the new antislavery Republican Party. When the Civil War broke out in 1861, they signed up to fight in droves. August Willich joined, too. He rose in the ranks from private to brevet major-general. His Ohio soldiers were conspicuous for their fighting ability and determination.

Lew Wallace1 was a general in the war. In his autobiography, he wrote this about the Battle of Shiloh:

They were but a regiment; yet, at sight of them the enemy halted, about-faced, and returned to his position in the woods. There he struck out with a fire so lively that the new-comers halted and showed signs of distress. Then an officer rode swiftly round their left flank and stopped when in front of them, his back to the enemy. What he said I could not hear, but from the motions of the men he was putting them through the manual of arms – this notwitstanding some of them were dropping in the ranks. Taken all in all that I think was the most audacious thing that came under my observation during the war. The effect was magical.'

When he asked who the officer was, he received the reply, 'August Willich.' Wallace spread the word among his soldiers that the Army of the Ohio had set an example and that the rest of them should 'not allow themselves to be outdone now.' Other Union commanders also singled out Willich for praise in their accounts of the war. Willich was certainly a useful commander, for – like Baron von Steuben in the War for Independence – he could drill his men in German.

In 1862, Willich was captured by the enemy when his horse was shot out from under him. He spent four months in Libby Prison, where he planned improved strategy. Let out, he went back to fighting, leading troops at Chattanooga and Chickamauga. In 1864, he was wounded in the Atlanta campaign, after which he commanded garrisons in Cincinnati and nearby Kentucky.

After the war, Willich went into civil service. In 1870, he offered his military services to Prussia at the time of the Franco-Prussian War. Prussia declined: they'd probably read his dossier. He went back to studying music and philosophy: Willich was known as one of the 'Ohio Hegelians2'.

When he died, the New York Times wrote:

Gen. Willich was undoubtedly the ablest and bravest officer of German descent engaged in the war of the rebellion, and owed his preferment wholly to his untiring energy, bravery in the field, and marked abilities.

They might have added, 'and for challenging Marxists to duels.'