Hope in an Inauguration 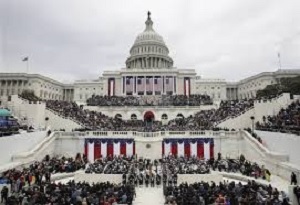 No doubt many Americans were relieved that the inauguration of Joe Biden happened at all, considering how close Washington D.C. came to seeing blood spilled just two weeks earlier.

That the inauguration came off with dignity and restraint, but also a sense of purpose must have been reassuring to many. Indeed, former President Trump
paid the inauguration's organizers the compliment of being jealous of the fact that Garth Brooks performed (Brooks had said no to Trump four years earlier). Lady Gaga sang the national anthem with considerable energy and flair, punching the high notes and holding many phrases for emphasis. Jennifer Lopes sang 'This land is your land' and 'American the beautiful' with sweet tones. As for Brooks, his rendition of 'Amazing Grace' was heartfelt, and reminded some observers of a time when former president Barack Obama had sung the same song (though not at an inauguration).

But as nice as these touches were, and as much envy as they inspired in the former president (who was conspicuous for his absence), they were not the main event. An inauguration, after all, gives the incoming President and Vice president a chance to take the oath of office, and the President has a bully pulpit for his inaugural address.

So, how did Biden do in his speech? Surprisingly well, considering the laid-back, affable persona that he has cultivated over the years. He reminded this observer of the expression 'an iron fist in a silk glove. He could be emphatic without raising his voice, but he showed that he meant what he said. He stressed unity 20 times in 22 minutes. He invited people to come together. He thanked his predecessors, and spoke of the triumph of a cause, the cause of democracy. 'This is a great nation. We are a good people,' he said. 'Our better angels have always prevailed.'

As if to reassure America that his administration would take the fight against Covid-19 seriously, he said that the virus had taken as many lives in one year (400,000+) as America lost in World War II. After mentioning this, he asked for a moment of silence for those who had been lost.

In all, the inauguration lasted an hour and fourteen minutes, of which the inaugural address comprised twenty-two. There were no malfunctions or awkward pauses worth mentioning. Those viewers who might have expected the participants to wear masks throughout must have been relieved to see that the masks came off for singing and speaking.

A quick survey of the Internet showed that Biden's speech was well-received, not just by Democrats and liberals, but also by some conservatives.

The new administration is off to a good start. One can't help but wish them luck, even though the tasks to be accomplished seem thoroughly daunting.