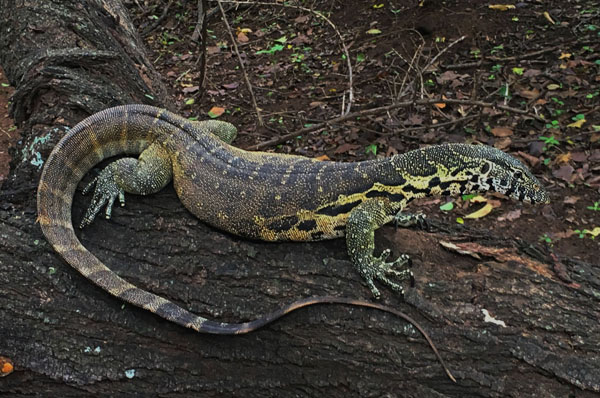 This past weekend I was on an excursion along with my friend Ruan Stander and fellow-herpetologists Luke Kemp and Chad Keats, both of the Snakebite Institute. As I said I would, I came back with material for several more installments of 'Colours of Wildlife'! So here is one I hope you'll all appreciate. This time I treat you to my photography rather than my painting skills! I'm not a patch on Ruan, Luke or Chad, but I got some nice shots that should suffice.


Here I present to you a Nile Monitor, Varanus niloticus (held by Ruan in one shot to show off its size). The genus name, which it shares with other monitors, comes from the Arabic 'waran' or 'waral' and means 'dragon lizard'. Its common name refers to the Nile River, just one among many rivers it inhabits, and perhaps its habit of monitoring its surroundings or giving warning of the approach of other dangerous animals. In South Africa, monitors also called a 'leguan' or in Afrikaans 'likkewaan', both of which comes from the Portuguese 'l'iguana' ('the iguana' – even though it's not really an iguana. Similarly, in Australia, related monitor lizards are sometimes called 'goanna'.) It is closely related to the Rock Monitor that I featured a while ago. Compared to the rock monitor, the nile monitor is more slender, but longer. It is one of the longest lizards in the world, reaching 245 cm/8' in length. That compares with its close relative the Komodo Dragon, Varanus komodoensis, which can exceed 3m/10' in length. The dragons are much more heavily built, though. Nile monitors exceptionally reach weights of 15-20 kg/33-44 lbs. This one you see here, is about 1 m in length and I estimate only 2 kg/4 lbs or so. Still it was a very strong character and very hard to persuade to cooperate with us! 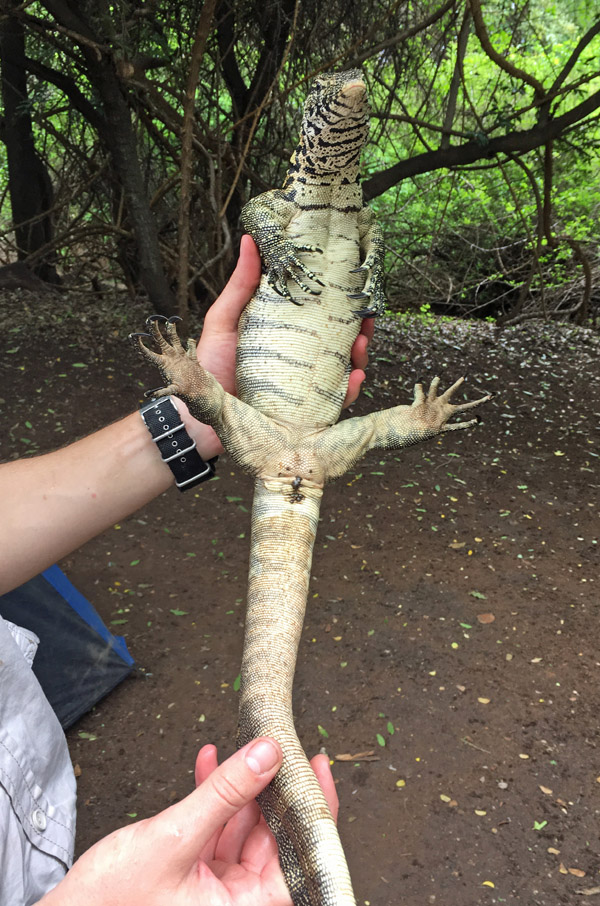 We caught this individual in the very far north-eastern corner of South Africa, close to the Pafuri Gate of the Kruger National Park, near a big river. This is prime country for Nile monitors. They occur over most of South Africa, except for the very driest parts. So long as there's a medium-sized to large river, the monitors are there. They extend into the rest of sub-Saharan Africa, being absent from the dry Horn of Africa and the Sahara Desert, but using the Nile River as a corridor for reaching North Africa. Not very long ago, they also entered the mid-East in the Jordan Valley region, but went extinct there. Elsewhere, though, they've extended their range as a result of escaped animals from the pet trade, and are now found as breeding, flourishing populations in Florida and Singapore.


There's a bit of confusion around the scientific classification of Nile monitors. Over this vast range in Africa, they vary quite a bit, and some forms look different enough to be considered separate subspecies or full species. For instance, a form called the Ornate Monitor, 'Varanus ornatus', which occurs in rainforests in West and Central Africa, was thought to be a proper species for a while. But genetic studies suggest that this form is in fact not a species in its own right. In fact, ornate monitors themselves seem to fall into two groups: some that are simply good old plain Nile monitors, and others that belong, together with savannah-living monitors of West Africa, to a different species, the West African Nile Monitor, Varanus stellatus.

It should be clear that Nile monitors are powerful lizards. They are generalist predators. The body shot here shows the tail, which is flattened side-to-side, to function as a swimming appendage. A swimming monitor will keep its legs and arms to its side as it undulates its body and tail to drive it forward through the water. It will typically lift its head up slightly above the water level as it swims. It moves very well on land, walking most of the time with its body held well off the ground, even though its legs splay sideways like those of most lizards. It runs fast as well. Its curved, sharp claws enable it to climb trees, and also to dig. Just about the only thing it can't do, is fly! And give the monitors more time and they may figure that one out, too.


You can also see here that the Nile monitor lizards have quite attractive markings. Black-and-yellow bars, blotches and stripes decorate their bodies, especially their undersides. These markings are most vivid in young animals, and fade somewhat to a neutral greyish-brown as they reach adulthood, though some vestiges of the coloration usually remain. In habitat, they can be quite well camouflaged, staying close to cover of branches and leaves when they can. Swimming, they often move inside the cover of aquatic plants, just their heads poking out a bit to give them away.


Nile monitors are formidable and versatile all-round predators. Their food ranges from invertebrates to fish, frogs, birds, small mammals, and other reptiles. They are fond of eggs, especially those of crocodiles, which they can detect with their keen sense of smell, and dig out with their claws. Where they encounter human populations, they can prey on pets like cats and small dogs. The escaped animals in Florida are even endangering the local alligators and crocodiles, eating their eggs and young. 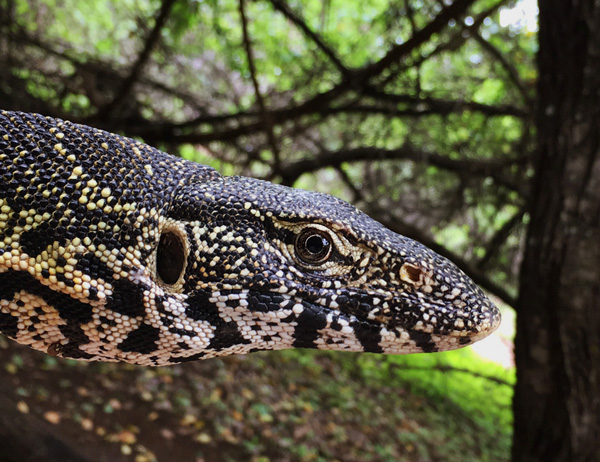 What to me is amazing about monitor lizards, is how conservative yet successful they are. Their basic lizard body shape goes back to the very first backboned animals to emerge onto the land, which was over three hundred million years ago! Not much later, there were the first land animals that indeed looked so much like monitor lizards that they were named Varanosaurus which means 'monitor lizard'. Indeed if you saw one of these you'd likely think it to be one, so similar does it look. Yet, this Varanosaurus was not at all a monitor lizard, but actually a Pelycosaur, a very early mammal-ancestor! That was long before there were actual mammals, or dinosaurs, or lizards as we know them today. Monitor lizards proper emerged at least 65 million years ago, probably more. Something very similar to a monitor lizard was the ancestor of the great ocean-living Mosasaurs, real-life sea monsters that could exceed 12 m/40' in length. These were much more aquatically adapted than even the Nile monitor, having flattened tails with flukes and paddle-like front and hind limbs. Mosasaurs likely gave live birth, not even coming onto land to lay eggs. Sadly, they went extinct along with the non-Avian dinosaurs and many other forms of life during the great extinction event that happened about 65 million years ago.


Living monitor lizards still flourish over much of the world: Africa, southern Asia and Australia. They also colonized many islands, and the Komodo Dragon is one such form. Their very conservative body plan belie a host of adaptations. They vary from species no larger than typical lizards, to several giant species in Africa, Asia and Australia. While most are carnivorous, a few tree-living species eat mostly fruits. Their hearts are more fully divided into chambers than those of other reptiles, allowing them a blood flow that is more efficient, with the blood going to their lungs mostly separate from that flowing to their bodies. This allows better oxygenation and a higher metabolic rate, which in turn means they're stronger and have more stamina than other lizards. They also have lungs with air-sac extensions similar to those of birds, which it now seems allows for a uni-directional flow of air through their airways, more birdlike and even more efficient than those of mammals. Like snakes, they have now been discovered to have venom, that they use to incapacitate or kill their prey. In the past, it was thought that this was done by a cocktail of bacteria that live in their saliva, but now we know that all monitor lizards make their own venom. While all of them lay eggs, some are able to lay eggs that will hatch even despite not having been fertilized by a male – this is called parthenogenesis. They are smart, able to count to six, capable of recognizing individual humans such as their keepers, able to engage in cooperative hunting where they can actually work with a particular strategy, and individual monitors can have different 'personalities'. Monitors kept as pets have been seen to engage in playful behaviours.


Nile monitors indeed are often kept as pets, because when young they are so attractive. But grown up, they can become big problems. Their size, strength and ingenuity make them difficult to keep, or even actively dangerous. They can lash out painfully with their tails, or inflict gashes with their sharp claws or teeth. It is best to leave them as they are in the wild. Currently they're not endangered, although in some places humans hunt and eat them.