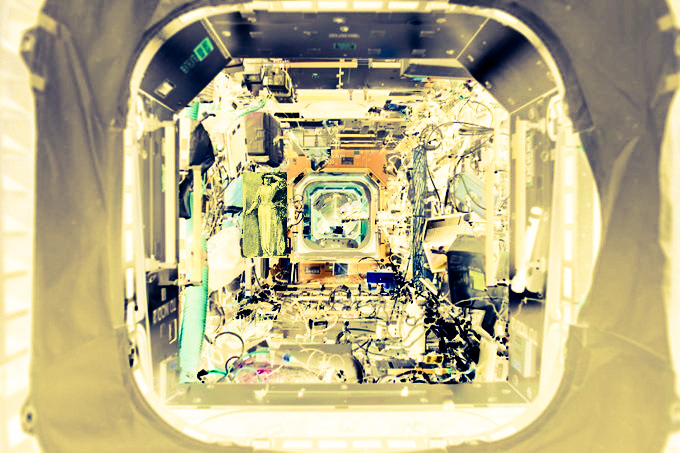 Able Was I Ere I Saw Elba

The space station was a palindrome: a long shaft of jumbled sections that reflected from the midpoint. There was scarcely a foothold in the whole construction, merely the occasional brace to hook a toe around. This wasn't terribly important, as there was no gravity. The ensemble resembled nothing so much as a very crowded garage full of spare parts. Its aesthetic was Early Mechanic. While the station contained everything that was necessary to humanoid survival – air, water, food sources, waste elimination, exercise equipment (almost never used) – it was utterly lacking in what a planet-based organism would call 'atmosphere'.

Mel hated it. But it was her home. Her forever home.

'D'ohn-eee!' she called as she floated through the junk-filled corridor, batting away stray (empty) food packets labelled 'Krusty Premade Pitapits' and 'Mic'D's Xtra-Krisp'. The cleaning robots hadn't got down this far yet in the cycle.

'D'ohn-eee! Where are you?' But she knew where he was. Where he always was: hunched before his video screen, watching his archives, reliving his glory days. Or staring at the communication link, the one that was permanently dead. The one that would never be activated again, by order of the Planetary Council.

She knew where he was. She only called to hear her own voice. So she wouldn't forget what that sounded like.

The planet Solipse was once a happy place – and would be again, its leaders hoped. But no one would ever return to the blissful ignorance of the Time Before. The era predating Instacom.

Once, communication had required a postal service, a telephone, television. Then came Instantaneous Communication. Solipse had become a global village. All commerce was carried out by Instacom. All personal greetings, all entertainment, all education, all business meetings, even all worship took place over the Comlink. Life was simpler that way. And it was an energy-saver.

There were, let us say, drawbacks.

For one thing, people stopped talking to each other in person. They even jostled one another rudely in public because their attention was firmly on the devices in their hands. Whole family meals took place without a word being spoken. (Whether this was a drawback or not depended on how many teenagers were involved.)

Another unexpected feature of Instacom was the way it focused aggression. Many users seemed to concentrate all their frustrations on the little screens. Every petty annoyance, daily setback, and act of thoughtlessness on the part of people they met channeled itself into a blast of virtual anger aimed at whatever or whomever they disagreed with on Instacom.

Sooner or later, the inevitable happened: somebody figured out how to use all the anger. A politician thought, I don't have to make the majority love me. I only have to make a vocal minority hopping mad. And that's what happened.

Daily 'outrage' postings convinced people that all was not well on the planet Solipse. Their interests were not being looked after by the Powers That Be. Secret cabals existed to steal their property, their rights, their peace of mind. The only solution was anger, anger, and more anger. None of the current politicians were any good. 'They' were out to get everybody – the decent, hardworking, ordinary folk. Something had to be done. And something was.

A new, exciting candidate emerged: Don Alfonso Hardacanute, scion of a breakfast food company. The Don, as he was called, was a vain, silly man of advanced years who had spent his life dodging responsibility. He'd run his father's cereal concern into the ground. In fact, the only reason he still had any money left was that his late father's fortune had been so huge that it was almost impossible for one thriftless descendant to spend it all. But The Don had tried his best. The other reason he wasn't totally bankrupt yet was that he cheated massively on his taxes, a fact he went to great lengths to conceal from the public.

Solipse decided on a wonderful new way to elect leaders: they'd use Instacom. All people had to do to register their vote was to log on and click. They did – and The Don won. He was overjoyed, at first.

Then he realised that there was work involved. Work: the one thing he'd spent his whole life trying to avoid.

The next several years were a totally predictable nightmare for Solipse. Unable to master even the rudiments of governance, The Don did what he did best: stirred the pot. He divided his days between hiring and firing cronies for tasks at which they were just as incompetent as he, and staging 'appearances' in which he told jokes to adoring crowds of diehard supporters. When the pleasures of hurling schoolyard taunts at his critics paled, there was always his favourite sport, Tiddlywinks. He cheated.

As day after day of planetary torture continued, dissatisfaction mounted. Finally, the people had had enough. Come the next election, they insisted on paper mail-in ballots. Paper balloting meant that people had to take the time to think about what they were doing. They had to remember to seal the envelope. Paper ballots also made it harder to cheat by using Instacom algorithms. The Don's friends tried to stop this by sabotaging the postal system, but were defeated by determined postal workers, whose motto was, 'Neither snow, nor sleet, nor barking dogs, nor conniving politicians shall stay us on our appointed rounds.' The Don lost by a staggering amount of pieces of paper.

Solipse gave a collective sigh of relief and tried to move on. Unfortunately, untangling the mess The Don had made proved more complicated than they thought. The cleanup also uncovered a large number of crimes committed by The Don and his erstwhile friends – 'erstwhile' because obviously, The Don dropped them like hot potatoes when they got caught.

The minions were imprisoned, most of them in minimum-security facilities where they were allowed to play Tiddlywinks. The Don was more problematic. The new government feared that, if left his own devices, The Don would continue to stir up trouble. Even prisons had Instacom access, so…

Mel located The Don, finally. He was hunched over a keyboard, a ScrumptiousBurger™ in one hand. With the other, he was typing furiously with two pudgy fingers.

'AND IT IS ALL UNFAIR!!!' he typed, and hit 'SEND' with a triumphant flourish.

The recoil threw him across the room, where he crashed into a bulkhead, narrowly missing a row of rivets.

'D'ohn-eee! You must remember about the grav-i-tee!' Mel didn't try to remind him that his 'posts' were going nowhere. The Planetary Council had disconnected the terminal for outgoing messages. The only contact they had with the planet below was a weekly news broadcast (which invariably sent The Don into an emotional tailspin, as it showed his successor's successes), and the weekly supply delivery, consisting mostly of microwavable fast food and the occasional fashion delivery. Mel liked to keep up, even if nobody could see her latest look.

His meal and tantrum over, The Don settled down to his favourite pastime of watching videos of his greatest hits: haranguing a crowd of chanting enthusiasts, riding escalators, and sharing a bountiful meal of ScrumptiousBurgers™ with visiting athletes. Their expressions had been photoshopped to look pleased with the non-training meal.

She sighed. 'Sure, D'ohn-eee. Whatever you want.'

Beneath them, the planet spun gracefully toward a brighter tomorrow.