Gaur: The Beefiest of All 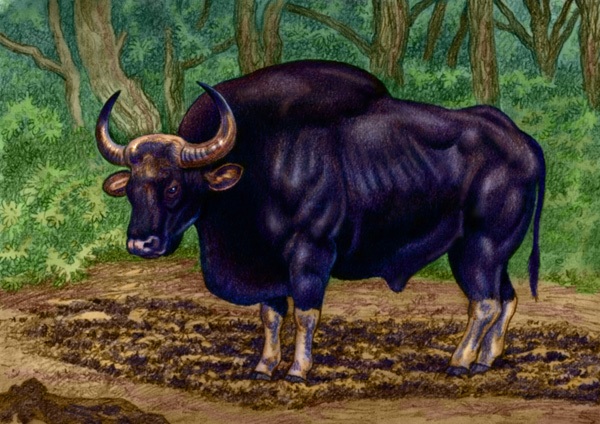 In recent instalments of 'Desideria the Demoness' I've been joking a bit about the bodybuilding world and how some people go to extremes to build muscles. Those of you not in the actual scene might not realize just how crazy it is right now, and all the things people are putting into their bodies just to look more impressive. But in the animal world there are some physiques that put the most chemically-enhanced of humans to shame, and it is all done naturally! For me, at the top of the lot there is this, the Gaur, Bos gaurus. A better name for it would be 'Beefzilla'. I would go so far as to call it the most muscular mammal of all. I mean 'muscular' in the sense of the proportion of muscle to bone, skin and fat, and in how clearly it shows. Of course, much larger mammals like rhinos, hippos, elephants and whales have a larger total amount of musculature, but it is not as large a percentage of their total bodyweight and is not as prominently visible. And if you think I exaggerated the muscles in my painting, go check some pics online. There are some close contenders like male gorillas of both species, and male red kangaroos, but they can't touch the gaur in terms of stacks and mounds of pure beef. This is a wild animal, so no hormone treatments, no special fortified diets, no selective breeding, as is the case with some super-beefy breeds of domestic cattle. The gaur's accumulation of meat happens in its normal course of life and on a completely organic-vegan diet!


So what is a gaur precisely? It is a species of wild ox, in the same genus as domestic cattle, Bos taurus. There exists a domesticated species that has the gaur as an ancestor, called the Gayal, Bos frontalis. Other wild oxen include the banteng, Bos banteng, the kouprey, Bos sauveli, and the yak, Bos grunniens. They're also closely related to bison, water buffalo, and the African buffalo, though these are presently classified in different genera. The gaur is the largest living species of ox, and one of the largest of the artiodactyls or even-hoofed mammals, only rivalled by the giraffe in overall size, and exceeded by the hippopotamus in weight. There were some prehistoric bison, buffaloes and oxen that exceeded it in size, but not by much. The largest bull gaurs today can weigh 1500 kg/3300 lbs and stand 220 cm/7'3" at the top of the shoulder hump. The gaur bull's horns are not as large as those of some species of buffalo, but can reach 115 cm/45" measured around the curve. Female and young male gaurs are smaller, slighter and a bit lighter and browner in colour.


In the past, the gaur ranged over most of southeast Asia from India in the west to Nepal, Bhutan and southern Tibet in the north to the Malayan peninsula in the south and southern China in the east. Today this range is much fragmented, and the gaurs on the island of Sri Lanka have gone extinct. Gaurs inhabit a variety of wooded habitats, provided these feature both lots of grass plus lots of leafy herbs, shrubs and trees. Gaurs today live mostly in hilly terrain up to an altitude of about 2800 m/9200', but likely would also roam the lowlands, only those are by now almost all inhabited and cultivated by humans. These also tend to hunt the gaur for their abundant amounts of meat. A more recent sort of threat to gaurs are hunters who want to make their heads into trophies. For these reasons, along with the destruction of its habitat, the gaur is now much reduced in numbers and while not yet directly threatened with extinction, is considered vulnerable. They do occur in some reserves, national parks and protected areas.


Where not disturbed, gaurs are active by day, but where there's lots of human activity, they turn nocturnal. They live in small herds of eight to twenty, but the herds sometimes join up into groups of 50 animals or more. Herds are led by a large cow, a matriarch, and usually include at least one bull. Some bulls are solitary or wander from one herd to another, mating with whichever cows respond to their approaches. Their imposing musculature is used to establish dominance, the smaller bull giving way to the larger, without their needing to fight. Bulls have a loud, resonant, far-carrying mating call. Gaurs also moo like cows and utter a whistling alarm call at any sign of danger. Where gaurs exist close to humans, they may be either shy and cautious, or bold and aggressive. In summer with lots of mosquitoes and flies stinging them, they seem to be more short-tempered, and may charge at humans, and even at domestic cattle, occasionally killing these.


While being vegans, gaurs benefit from a very large variety of plant foods: grasses, herbs, the leaves of shrubs and trees, flowers, fruit and even bark. Like many large, tropical mammals, they feed mainly in the morning and the afternoon, spending the hottest parts of the day resting in the shade. They drink frequently but don't appear to bathe or wallow in mud. They do sometimes stand in mud and lick it to ingest some needed minerals.


Gaurs mature at 2-3 years and can live to the age of thirty. The cows can bear calves, typically just one at a time (twins being rare), any time of the year, but mostly from December to June. Calves are vulnerable to leopards, dholes, and crocodiles. Adults are only at risk from tigers and the largest of crocodiles. If a herd is attacked, the adult gaurs will form a circle around the young to protect them with their horns. Gaurs have been recorded as killing tigers. But a tiger can bring down a solitary gaur even up to twice its own weight, giving you an idea just how profoundly powerful and skilled these great cats are.


But, as I mentioned, the greatest threat to gaurs come from humans. They're legally protected over their whole range, but lots are killed illegally. They seem to be difficult to keep and breed in captivity. Gaurs are recognized in human culture. They're the state animals for Bihar and Goa in India. A gaur is also the mascot of an Indian army division. A right-wing paramilitary organization in Thailand was called the 'Red Gaurs'. Red gaurs also were the originals for the Red Bull energy drink. I hope we humanity can respect these great beefy beasts enough to ensure their continued wild existence on this planet.