Vienna, 1880 brings us to a café in Vienna in 1880. Domestic details play an important role in understanding this time and place. Vienna is the centre of a vast empire that appears to run on coffee and cake. Get your holes-in-history recipe ideas here. 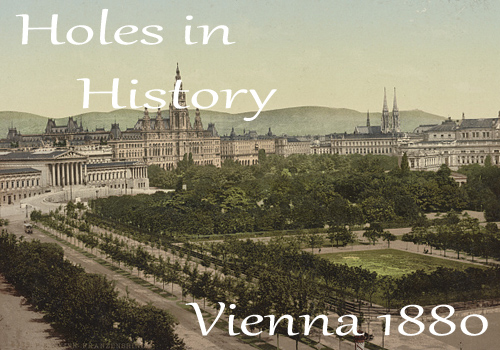 The morning sun was shining into the streets. The sky was blue, with just a few decoratively floating white clouds. The virginia creeper colored the high wall to the neighbouring courtyard in lush green. Under the flowering lilac and elder bushes Katharina, the small daughter of the Drasche family who lived in one of the apartments at the back of the house, played with a few small wooden animals and a doll. Her mother had made it from cloth scraps.


Elisabeth had opened both the inner and the outer window panes of the café's kitchen. This let in the warm air of spring but also let out the great smells of cake into the courtyard, from where it made its way through the neighbourhood.


Elisabeth and Anna were very busy today. It was the first Tuesday of the month, the day on which Frau Doktor Müller – wife of Herr Doktor Müller – traditionally invited her friends to the café. Egg whites had to be beaten in a large bowl for baiser. Yeast dough had to be folded with butter for Kolatschen, which were filled with plum jam or curd. Walnuts and poppy seeds had to be grinded and turned into a filling for half-moon shaped Beugel.


At noon they were done. They chose only the most perfect pieces of baiser to arrange on a plate. The square Kolatschen were sprinkled with caster sugar and the Beugel was already shining from a thin glazing of egg. Elisabeth and Anna were happy with their work.


Elisabeth looked out of the window as she heard the heavy wooden yard gate open and her chattering children come home from school. Katharina was called to lunch by her mother. She gathered her toys and ran upstairs together with Michael and Magdalena.