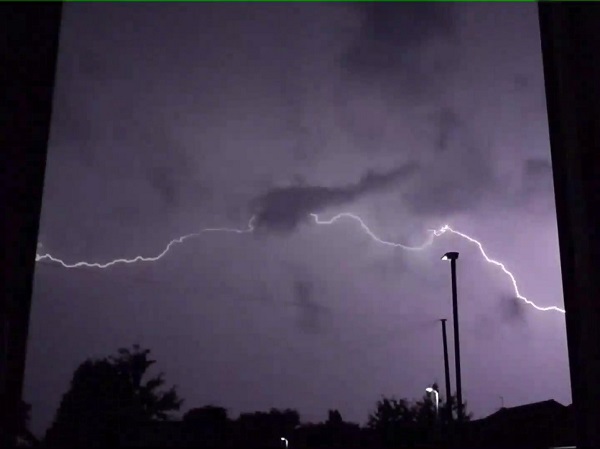 It was a lovely July afternoon when the writer went to Clematis Station to visit the town's oldest man. His name was Fernald Shanahan, born in 1920. This was the day after his hundredth birthday. I hoped that the excitement of his birthday festivities had not worn him out too much.

It was a couple of hours after lunch, and I had been told by the people who answered the phone that he customarily took a nap after each meal. An old man's digestion doesn't work as fast as it might have in his youth.

He was just coming out of his nap as I arrived in his room.

His eyesight was not particularly good, and he needed a hearing aid. Well, those are the vagaries of living a long life.

His room was tidy. He had undoubtedly left a house full of mementoes and memories. The writer wondered how a lifelong bachelor like him had managed to dispose of all that stuff, but having interviewed many residents of "The Station," the answer was not hard to find: several
local charities had volunteers who routinely sifted through people's stuff when they sold their homes to go into these kinds of developments.

The most prominent local charity was Staff of Life. With a little luck, it was able to find enough items of value to justify the effort. Recycling was, of course, de rigueur pretty much everywhere, even if China no longer wanted America's stuff. Some cities would have already come up with alternative uses for recyclables such as composting food waste, or burning whatever was burnable.

Well, this chapter was supposed to be about Fernald Shanahan, and the topic drifted. Sorry.

Anyway, Fernald liked to be asked about the wisdom he had accumulated over a century. Even better, he liked it when an interviewer allowed him to choose his subjects, as he did today.

"You're probably here to ask about the Hurricane of 1938, he said in a weak voice. Everyone does, sooner or later. I was just 18, and I was in Nobility, the next town. As you know, the railroad tracks divide Nobility from Crepuscular Meadows, and I was at Nobility Station
(so-called because there was once a railroad station on the border, at the corner of Water Street and Wattabighill Road).

Anyway, besides the houses that were near the former station there was a very large apple orchard. It was September, and the apples were perfect for picking. I worked there all afternoon, but around 5:00 I noticed angry dark clouds gathering overhead. The heavy rain and strong gusts made it impossible to think of doing anything but clearing out of there as fast as possible.

Trees were already starting to get knocked down as I walked along Wattabighill Road. The railroad station was getting pummeled by the wind. Water Street was dicey. It ran steeply downhill, which made it slippery with all the the rain that was racing down it. I had three miles to go, but it seemed to take forever. I don't know how I got to my home on Birch Street in one piece."

He paused for breath, and then promptly fell asleep again.

"I think that's all you're going to get from him today," said an aide who escorted me out of his room.

"Should I try to come back another time?" the writer asked.

"If you like to hear about the Hurricane of 1938, you can," the aide said. "Otherwise, the Crepuscular Evening Gazette ran a very thorough interview with him about 15 years ago, and we can get a copy of it for you."