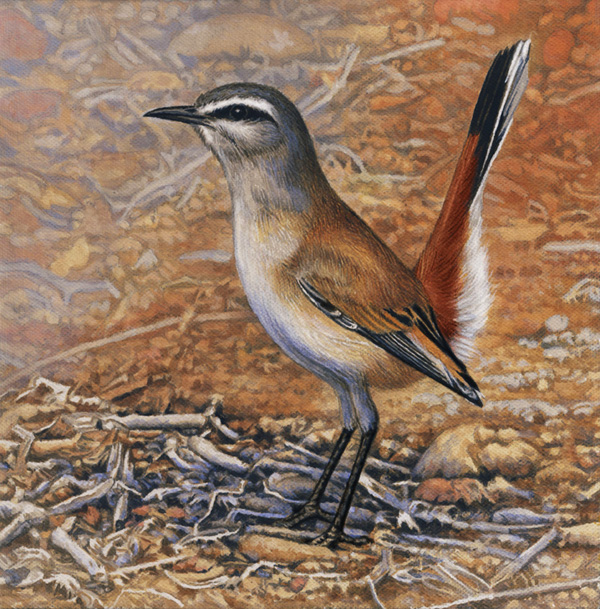 Another tweetie for today! I thank my friend Leonie Kellerman for allowing me to use her photo as reference for creating this painting. This is a Kalahari Scrub-Robin, Cercotrichas paena. It is also known as a Sandy Scrub-Robin. In Afrikaans it is known as a Kalahari Wipstert or 'Kalahari Tail-Cocker' for its habit of cocking its tail as you see here. The 'Kalahari' part refers to the Kalahari Desert, a huge arid region in the west-centre of Southern Africa, which is the core of the distribution of this bird. The Kalahari is not a true desert, since much of it receives more than 250 mm/10" of rain per year. But it is a region of very deep sand, with the result that all rain that falls, almost immediately sinks deep into the ground so that there's practically no surface water available over most of its extent. The 'desert' does host deep-rooted grasses and trees that can avail themselves of the underground water, and in some places, especially in good rain years, the vegetation can be surprisingly lush. The Kalahari scrub-robin does not occur only in the Kalahari, but extends marginally beyond its borders into dry woodland, scrubland and savannah. It is restricted to Southern Africa, its northern limits being south-western Angola, which is an extension of the drylands of western Namibia.

This species used to be known just as a 'Kalahari Robin'. Like many other South African birds, it got the name 'robin' for its resemblance to the Eurasian Robin, Erithacus rubecula. The resemblance is not very close in its case; it is closer in some of its relatives. Many birds around the world have been called robins, irrespective of their actual relationship to Eurasian robins; some are actually thrushes, while others belong to quite distantly related groups. They simply got called robins because they reminded the European explorers of the robins they knew back home. In the Kalahari scrub-robin's case, there is indeed a fairly close genetic relationship between the two. The Eurasian robin as well as the scrub-robin have until recently both been classified in the thrush family, along with a great many other birds, many of them bearing the name 'chat' (for their typical short contact calls). But the study of bird relationships is in flux, and birds are getting re-classified all over the place. So now, the Eurasian robin and the Kalahari scrub-robin, along with a great many other species including most chats, have been moved out of the thrush family and into the flycatcher family. Who knows? With additional genetic studies they may be moved yet again.


But irrespective of where the scrub-robins end up being classified, they are a well-distinguished group. They occur in Africa south of the Sahara Desert, in a variety of habitats from arid semi-desert to dense, moist mountain forest. Irrespective of these differences, the ten or so recognized species all have a similar build. They are not much larger than a sparrow, but appear more impressive due to having long legs, a long tail and a bold deportment. Most species have the habit of cocking their tails, this one especially so. Several have bright reddish-orange rump feathers, often extending onto the upper tail as in this species. While many scrub-robins look very much alike, their calls differ significantly and is often the best way of distinguishing them. In the Kalahari scrub-robin's case, it is easier to identify than most because of its overall sandy colour and its unmarked white belly. It is similar only to the closely related Rufous-tailed Scrub-Robin, also known as the Rufous Bush-Chat (again note the confusion in names), which occurs north of the equator and therefore is never confused with it 'in the field'.


This is quite a common species around my home town of Polokwane, living in more open areas while its close relative the White-browed Scrub-Robin prefers more densely-treed places. Its melodious whistle-call is a characteristic sound of the bush. Its fine-pointed bill shows that it is mainly an insect-eater. It hunts them by hopping on the ground and pecking them up. It frequently raises and then slowly lowers its tail, sometimes fanning it to show off its rufous, black and white pattern. Sometimes it also flicks its wings as it cocks its tail. The tail is also raised by male birds in territorial disputes.


These birds breed during the rainy season, when plants are in full leaf and flower and lots of insects arise to pollinate and eat them. They are monogamous, the male staying faithful to his female. The male mostly defends their breeding and hunting territory. The female builds the somewhat untidy grass nest in a low thorny tree or bush. She lays mostly two or three eggs. She incubates them herself, which takes about twelve days. When they hatch, she will remove the eggshells and drop them a distance from the nest so that they don't attract the attention of any predators. The chicks hatch blind, naked and helpless. The male now joins the female in feeding them. They grow rapidly, and typically fledge in twelve days.


Kalahari scrub-robins are widespread and abundant, and in no danger of extinction.