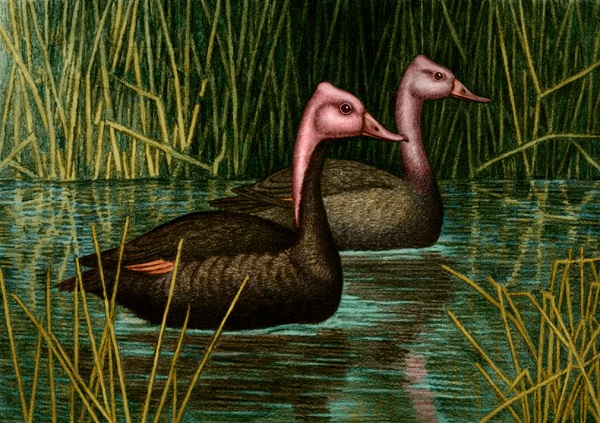 Yet another extinct bird species. This time it is the Pink-headed Duck, Rhodonessa caryophyllacea, one of the more famous of the extinct species. This duck was quite unique in its coloration, and apart from the pink head, also had a small crest that gave its head an unusual shape. It was related to pochards of the genera Netta and Aythya, but different enough from them to warrant a genus of its own. This duck used to occur in the plains around the Ganges River in India and Bangladesh, and in swamps in Myanmar/Burma. Because of the inaccessibility of this terrain, it was rarely seen. The last confirmed sighting was in 1935. Some people hope that there may still be a few of them around, but expeditions specifically in search of them have so far not turned up anything.


If seen well, a pink-headed duck is unmistakable. At 41-43 cm/16"-17" in overall length, and a weight of 793 to 1360 g/28 to 48 oz, it is a medium-sized to largish duck. The pink of its head continues down its neck, coming to an end in a point at the back. Its bill is pink also. The closely related red-crested pochard, Netta rufina, which may occur in the same region, also has a reddish head, but it is more orange than pink. The pochard also had a much different-shaped head, thanks to a large, fluffy crest. By contrast, the pink-headed duck has a small crest at the back of the head, giving a 'sloping' effect to the head. It has a long and slender bill and neck. The male has a dark brown body; the female is slightly lighter-coloured, with a duller head. The male and female both have a whitish patch towards the front of their opened wings.


The habitat of the pink-headed duck was swampy watercourses in tall elephant-grass jungle. It tended to frequent ponds surrounded and sheltered by grass and bushes. It fed by dabbling and upending, perhaps also by diving. It ate molluscs and other aquatic critters, and the stems, leaves and corms of aquatic plants. It made its nest amidst the grass in in the springtime, and the female lay six to seven creamy, almost spherical (unsual for a duck) eggs. The male displayed by puffing up his neck, first lowering his head backward to lie along his back, then straightening it while uttering a wheezy call.


Genetic studies indicate that this duck belonged to distinct line that had separated from the other pochards by 2.8 million years ago already. The pink hue of its head and neck came from carotenoid pigments, which also give flamingos their colour. This is otherwise a very rare pigment among the ducks.


Why is this duck extinct? Or maybe – is this duck extinct? It appears to never have been very common; genetic studies suggest it never had a population much over 25 000 individuals for the last 150 000 years. Such a small population makes it vulnerable to disturbances. It likely needed a very specific kind of habitat. Human population growth in India, Bangladesh and Myanmar has been tremendous over the past century or two, and wild habitats have been destroyed and changed on a large scale. This would have severely affected these ducks. Then they were also directly hunted, even though they're said to not have tasted good. But their beauty and unique appearance also made them popular with wildfowl collectors. There were pink-headed ducks already in the large bird collection of Lady Impey, wife of Elijah Impey, chief justice of Calcutta from 1774 to 1783. Many birds were stuffed and there are still several specimens in museums around the world. The only known photographs of this species are of captive birds in England in the nineteen twenties.


But despite the destruction, there still exists today large expanses of what look like suitable habitat for pink-headed ducks. Much of this in Myanmar is and for a while has been inaccessible to bird watchers and scientists, because of the political turmoil in that country. Consequently, there is a chance that there still might exist a tiny flock or two of this species. Since the last truly certain report of the species in 1935, there have been many more, but all of these are dubious. The duck, as I've said, is similar to the red-crested pochard, and confusion is also possible with the spot-billed duck. A trained birdwatcher or ornithologist can identify them for sure, if given a good view, but most reports have been from locals, hunters, and of fleeting glimpses. Several expeditions have been launched with the specific goal of finding it, such as one by Global Wildlife Conservation in 2017, but they all failed. The species is likely gone. Yet, more expeditions are planned, and if this species does turn up alive, it will be one of the biggest finds in conservation history.