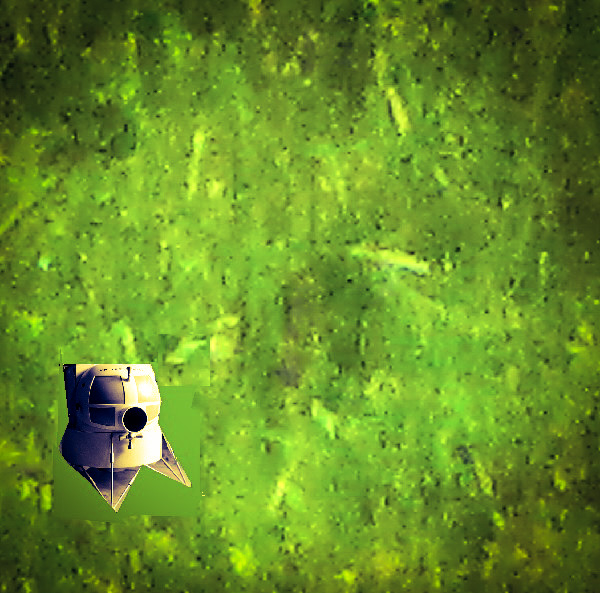 They were falling down to the ground like fiery rain. Then parachutes opened and the little drops continued their way to the ground like shining seeds of a giant dandelion. Little animals scurried away into their burrows as they set down on the ground rather heavily. Dust whirled around them. Metal legs unfolded from somewhere in the hulls in an effort to make them stand straight. Sometimes this was in vain. One was slowly sliding down on the rubble at the side of a hill. Another was stuck lopsidedly in a small, muddy pond.

For a while all was quiet again. Only the wind was rustling in the few larger specimen of flora. The large, round pods that had fallen from the sky were standing there, the light of the early morning sun reflecting off their shining metal surface. Then, suddenly, part of the metal fell off on each of them with a poof, revealing a neat rectangular hole.

Peter Gardener unbuckled the belts that had kept him in his chair and then slowly and tentatively removed his helmet. He took a deep breath, coughed, got up and stumbled to the door. He pulled the latch and the door swung inwards. The air was cool and smelled of... whatever. Blinking into the bright sunlight, Peter stepped out of the pod. He cursed and pulled his foot back out of the mud.

Peter remained standing in the door and looked around. His pod was sitting in a depression which was filled with rather muddy water. It was obviously not very deep as the pod was not floating and also the sandy bank was not very far away. He could see where the impact had splashed water all around. He sighed, reached for his backpack and climbed down, getting his white space suit muddy brown almost up to his hips. It didn't even go that well with the flashy orange stripes.

He climbed out of the water and on the embankment, leaving behind deep footprints in the wet sand. The remains of a little animal with a shell were buried in one of them. Behind him the dirty silver pod was half covered with the fabric of its parachute. One of its three legs was dangling in the air, still trying to find solid ground.

Peter reached the top of the small slope in no time and looked out at the landscape beyond. Most of the plains that stretched out around him seemed to be covered by something he decided to call grass. Like the waves of an ocean it was moving in the wind. Here and there he could see some larger plants, which he couldn't quite get himself to call trees. And there they were: several pods, not too far away. Peter checked the little screen on his wrist. The nearest pods were 39 and 43. 39 was the pod of Katherine Walters and her husband David. 43 was occupied by cargo. Peter would need help. And a winch.

And thus he set out. There was no path, only the seemingly endless sea of grass.