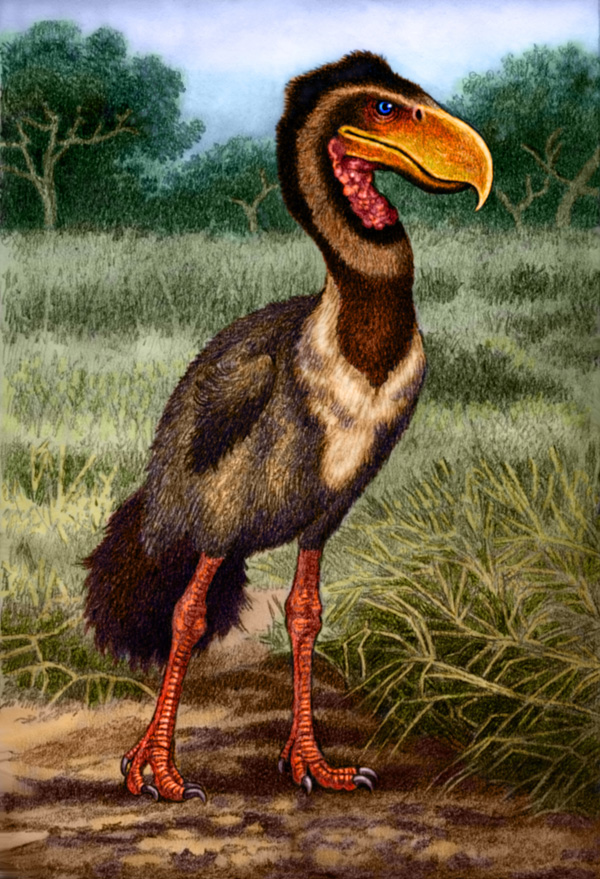 Back to the past! I hope you folks don't mind my prehistory-oriented articles; for me it is a huge fascination to learn more about the history of biodiversity on Earth. It gives me an idea of the incredible fruitfulness of forms found in the phenomenon of life. It really expands one's mental horizons! So today I bring you this pretty birdie, a Titanis walleri, or (fossil collector Benjamin I.) Waller's Titan. It was one of the Terror-birds, a group that enjoyed its greatest diversity in South America. It is, so far, the only member of the family known to have made it into North America. It arrived there about 5 million years ago, and stayed around until about 1.8 million years ago.

So what is a Terror-Bird? These birds, the Phorusrhacidae, were relatives of modern birds called Seriemas, the Cariamidae. Today, only two species of seriema survive in South America, the last remnants of this vastly diverse assemblage of birds. What they had in common, was that all of them were long-legged and adapted for running. They likely were all predatory as well; modern-day seriemas catch small animals like lizards and snakes, and the old terror-birds were definitely powerful hunters. Living seriemas have loose plumage and don't fly very much or very well; the terror-birds appear to have all been flightless. The extinct species vary from not much larger than a seriema, about 1m/yard tall, to giants that stood 3 m tall and perhaps weighed over 300 kg.


Terror-birds are first known from the Palaeocene, just after the extinction of the non-bird dinosaurs, and existed until very recently, in the Pleistocene, the most recent species perhaps having gone extinct about 100 000-20 000 years ago. Very early in their evolution, when continents were still mostly in contact or close to each other, they might have spread to Africa and Europe, where fossils have been found similar to those of the terror-birds, but we don't know this for certain. What we do know is that they were almost exclusively restricted to South America, during the time when that great continent was effectively an island, separated from North America and Africa – although a connection with Antarctica might have existed for a good deal of time. Antarctica can in a way be considered an extension of South America, the wildlife found there having been very similar until the time when the great southern continent froze over, ending the reign of most of its terrestrial wildlife.


South America in its 'island' phase had mammals unlike anything found anywhere else. Some modern groups that persist include the sloths, the ant-eaters, and the armadillos (some of which made it to North America). Groups that are present elsewhere, but that include some unique forms, are the primates, of which the South American monkeys form a group distinct from the old-world monkeys, and the rodents, of which South America has a contingent of diverse forms including guinea pigs, chinchillas and the largest modern rodents, the capybaras. Prehistoric South American rodents were even bigger, some having reached a size comparable to a bear or even a hippo. But then there's an amazing group of things that went entirely extinct. These included many herbivores, such as the toxodonts, the litopterns, the astrapotheres, the pyrotheres, the hegetotheres, and many more (that I hope to feature here sometime). They filled roles similar to those of rabbits, antelopes, deer, camels, horses, rhinos, elephants and more in other parts of the world. To feed on these herbivores, there were also unique native carnivores. Initially believed to be marsupials, related to kangaroos and koalas, they are today classified in a group called Sparassodonts, which may or may not have been closely related to marsupials. The sparassodonts included weasel-like, dog-like, cat-like and bear-like forms, one amazing group even resembling the sabre-toothed cats found elsewhere in the world, despite being extremely distantly related to them. Sparassodonts reached about 150 kg in bodyweight, the size of a jaguar or a smallish bear.

But not only mammals were top land predators of the time. Birds are dinosaurs, so when the other dinosaurs went extinct, they sort of had a head start, and rapidly (re-)enlarged to take up some of the niches at the top of the food web. The largest of them reached a weight of at least twice that of the largest sparassodont, and their long legs and necks, loose plumage, and huge heads would have made them look even bigger. Their running ability made them lords of the open plains, while the nimble sparassodonts were better at hunting in woodlands, thickets and forests.


The hunting method of terror birds was likely based on their speed. The fastest forms have been estimated to have had top speeds of 30-45 mph/48-72 kph. They were good at running in a straight line, but couldn't make rapid turns easily. This means they likely chased down larger animals, that were not good at manoeuvring quickly. Although some scientists think they might have used their strong, clawed feet to kick their prey, it is more likely that their main weapons were their huge heads. Their bills had sharp, curved tips, and were very strong in the vertical plane, but not so strong for resisting side-to-side forces. They might have killed or incapacitated their prey with a single, powerful peck. They could then use their feet to hold their prey down and rip the flesh from it with their beak tips. Smaller prey might even have been swallowed whole.


So, a great diversity of terror-birds flourished in South America, from the Palaeocene to the Pliocene. In that age, something changed. A land bridge formed linking North and South America. At first it was not a continuous bridge but a chain of islands; smaller animals could 'island-hop' to get from the one continent to the other. About 2.7 million years ago, the link was complete, and everything could now easily move from North to South America or the opposite way. In particular, now 'modern' herbivores from North America like deer, and carnivores like cats, dogs and bears, could get into South America and compete with the native species. It is likely that the huge number of extinctions of the distinctive South American mammals was mainly due to this new competitive factor: the deer were more efficient browsers and the jaguars, wolves, foxes and sabretooths more effective hunters. The native South Americans came second, then last, then were pushed out of the picture altogether.


So terror-birds lost their traditional prey animals, and also now had to compete with the fast, clever and adaptable mammalian predators from North America. They, too, fared poorly and most of species dwindled and went extinct.


But not all of the South American types went gently into that good night. Several made use of the land bridge to invade North America, where some of them did very well. The armadillos made it; while the giant glyptodonts, eventually, couldn't hack it and went extinct, the smaller ones flourished, the nine-banded armadillo now being abundant and successful. The Virginia opossum, too, made good. Giant ground sloths for a while were able to colonize most of North America, and likely went extinct only as a result of hunting by humans.


Among these successful immigrants to North America was Titanis walleri, one of the largest of the terror-birds, reaching 2.5 m in height and weighing at least 150 kg. It entered the continent about 5 million years ago and might have needed some island-hopping skills, since the Isthmus of Panama was still not quite complete by then. In North America it found lots of 'modern' mammal types like deer, pronghorns, camels, horses, elephants, bears, wolves, big cats and sabretooths. And it successfully lived among them for over three million years! This should prove that the terror bird type was actually not at all 'primitive' or poorly adapted. Titanis likely hunted on the plains, targeting some of the smaller herbivores.


The fossils of Titanis were found in Texas and Florida. I had an interesting question about this on a different site: how could a flightless bird cross the Mississippi River to reach Texas from Florida, or the other way round? Well the answer of course is that the question makes a mistaken assumption. The Mississippi River is a much, much, much younger thing than old Titanis. Indeed, most rivers in the USA right now are features dating back at most to the end of the last Ice Age, about 10 000 years ago – almost two million years after Titanis went extinct. The rivers started flowing in a changed landscape left behind by the northward retreat of the glaciers that previously covered almost the whole northern half of the continent (for interest, the southern edge of the ice sheet was roughly at the dividing line between the USA and Canada). The flow of rivers change enormously over periods of thousands of years; even mountains and hills change significantly over hundreds of thousands to millions of years. So the landscape over which Titanis dispersed itself wouldn't have been anything recognizable to a modern inhabitant of Texas or Florida.


So why did Titanis eventually go extinct? Seeing as it could actually for a long period consistently compete with the 'advanced' types of mammal found in North America, and there wasn't any specific thing that happened about 2 million years ago, it is difficult to say. We are still not quite clear on why things go extinct. Looking at evolution over many millions of years, there seems to be a turnover rate. Any very specific 'type' arises from obscurity, for a while enjoys great success, and then its moment of fame ends and it disappears. Evolution supplies replacements … sometimes these are 'better' in an obvious way, featuring new and improved builds and abilities … but sometimes not, the new ones perhaps just being lucky in some way, while the 'old' ones succumb to some kind of misfortune. In nature, evolution and extinction work together as creative forces, renewing and revitalizing the world's web of life. Evolution may even work a bit faster than extinction; there has been a progressive rise in the overall life diversity of Earth ever since the emergence of multi-cellular living beings about 600 million years ago. Only during great catastrophes does the rate of extinction exceed, sometimes greatly, the rate of evolution of new species. And right now we might be living in the midst of just such a catastrophe – one brought about by our own selves. We have caused and are causing extinctions much faster than new species can evolve. Where or when it will end, we'll just have to wait and see. But Titanis must remind us that those that perish are not necessarily the worst, and those that survive not necessarily the best.