Grandparents from Long Ago

Margaret Louisa Woods was a British novelist from a famous family, the Bradleys. Her father was a noted scholar and her sister was also a novelist. This is her preface to a group undertaking, the book   Our Centenarian Grandfather, which was about Ms Woods' maternal grandfather, one Benjamin Philpot, who was once Archdeacon of Man (what a great title). The Reverend lived from 1790-1890. Just imagine. We thought you'd enjoy this lively introduction to a family biography. Like all good family stories, it rambles a bit, and we learn more about Ms Woods' grandmother than about her grandfather, but hey, it's all good. 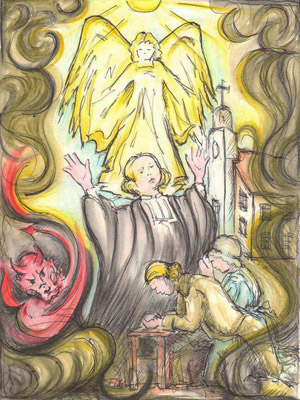 It is told by Boswell how, late in life, Dr. Johnson met again a friend from whom he had parted when both were young men. Comparing their several lots, the old friend said to him regretfully: 'I too have tried to be a philosopher, but Cheerfulness would break in.'

Suppose there were really to be a Judgement Day, with a Judge such as Evangelicals a hundred years ago believed in; a kind of Puritan Barebones-Rhadamanthus1, putting test questions about the Evangelical Faith – not much about Works – and the cardiac symptoms of Conversion2. Suppose that, and I can imagine my two grandfathers, contemporaries, both Evangelicals and
both in Orders3, standing together before him. Charles Bradley would be able to plead a long life and a brilliant intellect devoted to the preaching of the Evangelical Gospel, to the exclusion of all 'worldly' interests. When it is Benjamin Philpot's turn, I hear him saying with a compunctious sigh: 'I too have tried to be an
Evangelical, but Cheerfulness would break in.' However, when it came to the question of the emotional earthquake of Conversion and zeal in propagating that, it is probable that his record would prove the more satisfactory to our Puritan Rhadamanthus. For Charles Bradley's early letters show him troubled with 'coldness of heart,' and a most reprehensible unwillingness
to convert his own mother.

The attraction of Evangelicalism for a highly intellectual man is indeed hard to explain. It is easier to understand its appeal to the emotional, the imaginative and adventurous. People did not talk about Mysticism – except with contempt – in those days, but any form of
Religion which demands of the soul a sense of intimate personal contact with God, has in it the elements of Mysticism. The mistake of Evangelicism was to put an absurd value on mere emotional excitability4. As to adventure, what greater adventure could there be than to make of the whole of life a tight-rope walk to heaven over an abyss of Everlasting Fire? Then the wrestlings with, the last-minute-rescues of otherwise reprobate5 souls!

It is evident that a life of ardent and active Evangelicalism was not destitute of thrills, and to the imagination it offered the whole field of Unfulfilled Prophecy, in which to revel unconfined6. It must have been on these sides that it appealed to my maternal grandfather, for the narrowness and uncharitableness, the ascetic rigour and the gloom of Puritanism were alien to his nature.
I have heard that in the days when he was the much-loved centre of a growing-up family of boys and girls, the charm of the family group, apart from the personal beauty of some of its members, consisted in its gaiety, its atmosphere of high spirits and fun. By that time his wanderings were confined, but he was by nature a wanderer, and born thirty years later, would probably have
been found pushing into Africa, or trying his luck in the Wild West.

But in the early Nineteenth Century the world nearer home was not so 'tamed and tutored to the will' of the tourist and the shopkeeper as it is today. The favourite stories of our childhood were about the Isle of Man, where my mother was born ninety years ago. She had a picturesque gift as a story-teller, and so clear is my vision of the old Manx world in which her childhood was passed, that I have never wished to blur it by visiting the Beauty-spot Island of today. In my Isle of Man the old women in their white caps, sit at their spinning-wheels round the wide open hearth, telling old tales and crooning old songs. The local gaberlunzie-man7, a chartered beggar, like Edie Ochiltree, comes on his regular round, eats in the kitchen and sleeps in an out-house his due time, and then moves on.

My mother, a little girl in a long pigtail and longer frilled drawers, running down to the sea, stops to daringly drive her little spade into an ancient burial mound. Some people might say it was the barrow of an old pirate, perhaps a follower of Ogier the Dane. But nurse knows what
it is. It is a Druid's grave, and the consequences of its desecration will be awful. She snatches up her charge and rushes back to the house, where she prepares the mind of the little girl for an apparition of the Druid at any moment, though preferably at night, to demand vengeance for the insult offered to his remains. Oh, the terrible suspense, shared retrospectively, by her children,
of that little girl awaiting his appearance! But at length all is well. The Druid simply does not come.

On the eve of St. John the Beltane fires fling their ancient flames to heaven from the mountain sides. Everyone who does not wish to be haunted by ill-luck for a whole year must throw into the fire some object belonging to his house. In the good old days, which nobody
remembers, it would probably have been a superfluous baby8, but in the nineteenth century any old thing will do.

On that same eve, the fairies – malign Celtic fairies, not our merry English elves – are wont to walk abroad. No one could have a stronger objection to popish practices
than my grandmother, but she would never have kept a servant if she had not yearly, on St. John's Eve, allowed the house to be hung with green crosses9 and each child to wear a green cross round its neck. Otherwise Heaven knows what the fairies might not have done.

Then there is the scene of the family travelling- carriage stuck in the bed of the swollen mountain torrent. The children, even the horses, are in imminent danger of drowning. It is the kind of adventure that to-day is not infrequently met with in South Africa, where the crocodiles add to its effect. I feel sure that if my mother had known anything of South Africa, she would have regretted the absence of crocodiles in the Isle of Man.

One of our favourite stories was that of the Great Hurricane, famous through all Manxland, when haystacks and roofs of houses were blown away.

But the story of Big Bob was after all the favourite one. Alas! I can no longer believe that when the tide went down after the fatal night which saw his end, the huge legs of Big Bob were really seen sticking straight up, like two posts, out of the deep wet sand below Douglas pier. A header so complete must be rare. But that was how, in my childhood's vision, I saw the last of Big Bob.

My grandfather was old by the calendar when I first recollect him, yet I never knew him old. He retained to the last his mental alertness and his bodily activity, his blue eye and his gaiety, together with a humour different in savour from the dry ironic humour which is native to the salt soil of Puritanism. His heart too retained its power to feel. His eldest son, William – a man with a streak of real genius, as well as some amiable eccentricity – was in the habit of writing to his beloved father every day. William died. His father, who had had the little
ambition to complete his hundredth year, lost the will to do so, and did not long survive his son.

I do not claim for him any marked ability. His mind was rather active than powerful10. But a man of active mind, with a keen interest in life, can hardly live for close on a century without having something of interest to relate. So at least my brother and others of us believe, and in such belief he has compiled this book from the much bulkier manuscript records left by our grandfather.

1It occurs to the Editor that this reference may be a bit obscure. The 'Barebones' part is a reference to the funny names Puritans gave themselves (see Terry Pratchett's character 'Thou-Shalt-Not-Commit-Adultery Pulsifer'). Rhadamanthus was a wise king of Crete in Greek mythology, who was later put to work judging the dead. Now you know.2It had to involve a 'change of heart', you see.3Meaning, clergymen.4We find this and other of Ms Woods' observations on religion to be very instructive. Every generation has its nutty notions for later generations to scratch their heads over. Sometimes it's really hard to figure out what they thought they were doing. Stories like this really help.5You probably haven't heard the word 'reprobate' much, and if you did, it was probably joking. As in, 'My grandpa is an old reprobate who likes to hang around the racecourse.' Once upon a time, Calvinists used the term to designate 'sinners' who were doomed to go to hell. Evangelicals were nicer than Calvinists, and thought anybody could go to heaven if they repented.6He did! See his book Nine Lectures on the Second Advent of Christ. Seriously: if you can find time to read alternate-universe fiction, you can find time for Rev Philpot.7'Gaberlunzie' is a Scots word. A gaberlunzie-man had a legal licence to beg for a living. Obviously a sign of creeping socialism.8This lady has a wicked sense of humour, or else very morbid ideas about her ancestors.9Crosses belonged to 'popish', or Catholic practices, ever since the Protestant Reformation had made people critical of overdecorating churches. Obviously, the St John's Eve practices were much older than the Reformation (and possibly older than Christianity).10What a beautiful way to say that. Think about how many people you know who fit that description.