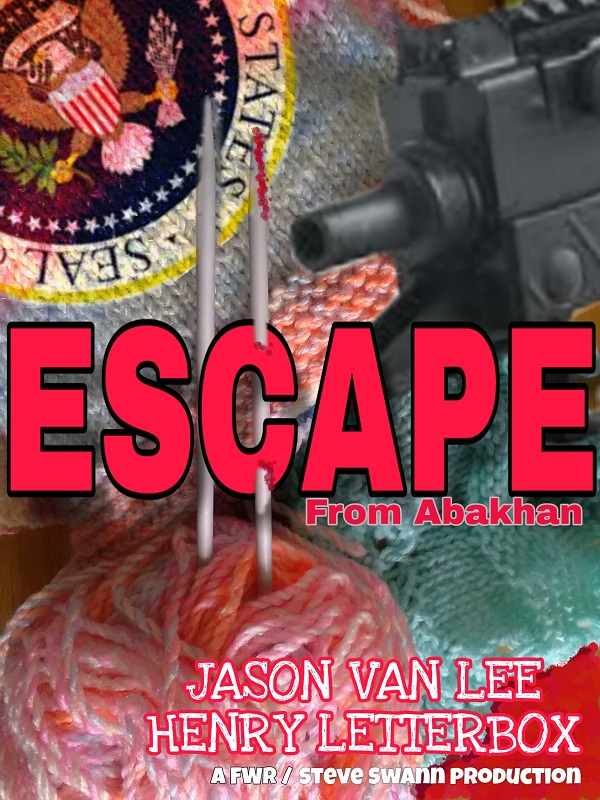 Snake spread out the diagram on the battered and rusty hood of the Buick. His good eye squinting in the dim streetlight as he traced the outline with his gloved fingers.

Snarling at the Major, Snake spat out the chewed match, and growled, 'Why me?'

'Because you're expendable, Pliskin, ' the Major snatched up the pattern, 'Expendable, and the best damn knitter on the West Coast!'

'And if I refuse?' Snake scowled, rubbing his eye-patch.

'One: The President doesn't get a nice Christmas cardi.. and two: You don't get to keep your head on your shoulders!'

The Major threw a bag of yarn and two needles, Pliskin effortlessly plucked them both out of the air.

'OK Major, the Prez gets her cardi and scarf, then I'm coming for you!'

Snake grabbed the knitting pattern, stuffing it into his tight leather vest, and sauntered off to pop the kettle on…

Jason Van Lee threw the nasty looking dagger and the even nastier looking sawn-off shotgun onto the sofa, joined momentarily by an
ever-so-slightly-less-nasty-looking crossbow, and a totally un-nasty-looking ball of pink wool.

'I mean darling, I know this is totes low budget, and I get he's a Brit, but the violence? Really O.T.T! Three minutes in, trez minutows, and I've shot five extras, sliced the pinkies of another, put one of those arrowy things through a poor bloody Doberman, and for some hashtag freakin' unbeleeevable reason, strangled an old lady with a ball of freakin" wool! Three words; Grat. Tuo. Tuss!'

But to get Jason 'Tentacles of Doom I, II, 3D and freakin' IV' Van freakin' Lee on board was a massive coup for the production team!

This was gonna be a long shoot, he mused as he lit another primo joint, and Henry wasn't even on set yet!

If Jason thought the lead-in scene was violent, wait til bleedin' Letterbox started doing his thing......

Cursing at the devastation he had wrought. Tears dripped into the redness in his hands.

Jagged holes where there should have been beauty.

Why couldn't he have prevented this tragedy?

All of his training, all of his study, all for nothing. His charm and muscle couldn't help him stop this bleedin' massacre.

For the first time in his life Henry Letterbox felt useless, impotent and totally out of his depth.

He wiped his eyes and stared accusingly at the pattern, somewhere along the sleeve he'd managed to drop several stitches.

Twenty-four hours to knit a bleedin' cardi1 for the President or get your head blown off - well that'd be him dead then - three weeks of needles and wool and he'd managed to knit and purl himself a tatty spider's web!

Cobblers to Stanislavsky and Strasberg, he'd wing the mechanics and the creative emotions, let him concentrate on the blood and gore! Never failed him so far in his film career.


Violently pulling his needles out of the yarn, he threw the tangled red mess into the bin and stormed out of the trailer to do his first scene with his latest co-star, not a bird this time, no, this time he was working with a proper legend, Jason bleedin' Van Lee no less!

This, me darlins, (once he found a Production Assistant to do his knitting for him) was gonna be an epic bleedin' movie.

Snake looked up from his knitting, the match in his mouth bobbing as he counted. On his lap, the letters ATES and SEA, although upside down, were now clearly visible, tiny stars and the beginning of an eagle's tail feathers also coming along nicely.

His needles stopped clacking as the first of the elderly ladies approached, gnarled and wrinkled finger pointing at his work.

Snake set the knitting carefully to one side, exposing the sawn-off shotgun on his lap, he forced what passed for a smile, good eye glaring at her.

'Firstly, old timer, it's a UK twelve-gauge, double-ended Prymm', his fingers stroked the barrel of the gun, 'Second, this here other twelve-gauge, says you ain't takin' my needle, ma'am!'

A metallic click to his right caused him to turn his head, eye patch blocking his peripheral vision.

The second senior had pulled an Uzi from under her beige Macintosh, the barrel squarely pointed at Pliskin's head.

'And my old Israeli friend here, son, says give Maureen the sticks', she tapped the trigger guard pointedly, 'Now, Snake!'

Pliskin growled, he hated crocheters. He sat back in the wicker chair, hands behind his head.

He glanced at the unfinished work, calculating the time he had wasted already.

Spitting out the match, he snarled, 'You got thirty seconds ladies, make 'em count!'

'Touchy much?' He actually hugged Henry closer, 'No, my dear chap, no, I just can't let it go! As artistes, it wouldn't do, just wouldn't, to give the audience, our dear, ticket buying public, the wrong impression, now, would it?'

Letterbox had absolutely no idea what this prat was getting at, he shrugged off the over-friendly arm, and pushed his chin out, in what he'd been told, was a dominant masculine gesture.

'Get to the point Lee, the footy's on in five!'

'Footy? How delightfully British! Totes endearing my dear Harry! Ok, point is, well, and please don't take this as critique, but, as one used to treading the boards, and the rather more gauche…"

Henry grabbed him by the lapels and screamed in his face, shaking him violently with each word, 'Just. Get. To. The. Bleedin'. Point!'

'There! Exactly that! Marvelous my dear! Truly marvellosso! That passion, the rugged, tough guy, Harry dear, you need to bring that passion to the role, weave that anger into your knitting!'

'What are you on about, you complete bleedin' plonker?'

'Look, you have the action down pat, totes believable, bravo, but your knitting style my dear boy?' Jason wagged a finger like a disapproving aunt, 'Hashtag honest-Jason-time, you knit like ….what's the words?...you knit like a bleedin' chimp! TTFN!'

As Lee flounced off, Henry stood, blood boiling, how dare that prat insult him!

Criticise his acting, he was okay with that, mock his accent, he'd had that all his life, but take the Mickey out of a guy's knitting prowess… well that was just bleedin' nasty!

He stormed back to his trailer, a bit of footy, some hot crumpets, and a long brood on how to get his revenge was needed…..

'Repeat. Square, Toggle or Circular? Advise and confirm. Over.'

Snake stared at the baffling display, then at the glowing red countdown on his leather clad wrist. Just four hours now, this was gonna be close.

His bloody hand, hovered over the confusing array before him, finger-less gloves slick and shining in the bright light of the display.

Breathing a sigh of relief, Snake acknowledged the Major with a growl, throwing the walkie into the carnage at his feet, before choosing four red buttons, toggles, to complete the cardi.

'Told you not to touch my buttons!' He snarled, stepping over the bodies of the amateur crafters.

They'd put up a brave fight, trying to claim the finishing touches for their Paddington plushies.

'Guess the bear's gonna have to be bare!'

'Nice job darlin'' Henry was genuinely impressed as he checked the action of the retractable needles.

The SFX girl blushed with pride, she'd always been a big Letterbox fan, from the early shock horror zombie flicks to her favourite vamp movie ever - Twice Bitten. Goodness, he was handsome in that one!

'Thank you Mr Letterbox, I've made them nice and smooth, the points are soft latex that will flatten when they're inserted, we've done several dummy runs and the effect is really cool!'

Henry looked across at the mannequin used to trial some of the more gruesome gadgets and asked for a personal demo.

'OK, so Snake and the Major, final showdown, the President has her cardi and scarf, when….'

'You know, gorgeous, I've actually read the bleedin' script!' He laughed to soften his harsh words, 'Just a demo eh love…..Sally is it...leave the story-line to us stars?'

Debbie took the pair of twelve-inch knitting needles over to the dummy.

Inserting the points into both nostrils, she pushed upwards.

The needles slid into themselves beautifully, retracting smoothly whilst giving the impression they were indeed piercing the latex head.

With two inches seemingly protruding, a slight click signaled they'd reached the end of their travel, and a hidden fake blood capsule (loaded for the final shoot) would send a crimson cascade from the nostrils.

'Nice job, Sally! I'm looking forward to jamming them up that big ugly conk of his!'

'It's Debb…' But he'd already strolled off, whistling happily to himself on the way to the set.

Snake limped into the Oval Office, battered and bruised, but confident in the quality of his knitwear.

Two Secret Service agents took several minutes divesting him of the many, many weapons he had on his person.

He, eventually, limped up to the huge oak desk and carefully pulled the package from his leather duster.

'You're not done til I say you're done, sit down, Pliskin!'

He glanced over to the President, now resplendent in a bright red cardigan, the Presidential Seal embroidered beautifully on the lapels, a matching scarf completed the ensemble.

'Just doing my job ma' am' He nodded to the time, 'Now please, tell the Major here to kindly remove the explosive that's gonna make a mess of your walls in… 96 seconds.'

The president nodded imperceptibly towards the Major, 'You've made your point, I have my cardi, do it! '

Reluctantly the major took out a chrome gadget and pressed in into Snake's neck. A sharp sting and a microscopic, but very deadly, charge was deactivated.


'Your country thanks you for your services to needle-craft Mr Pliskin, until next time.'

Snake stood up, obviously dismissed. He gestured towards his possessions on a side table.

'If there's gonna be a next time ma'am, may I keep my needles?'

She nodded once more.

The major slammed his hand down onto Pliskin's gloved fingers.

'Any funny business and you won't get out of this office Snake, get my point?'

Snake snarled, quick as a flash he turned his wrist, needles now pointing upwards. His other hand grabbed the back of the Major's head and forced his face downwards, the needles perfectly spaced to enter each of his nostrils.

'Now, you've got my points, scumbag!'

Who knows, they may come in handy?

… if he ever took up bleedin' knitting.

1Translation for non-Brits: cardigan, or sweater with front closure.