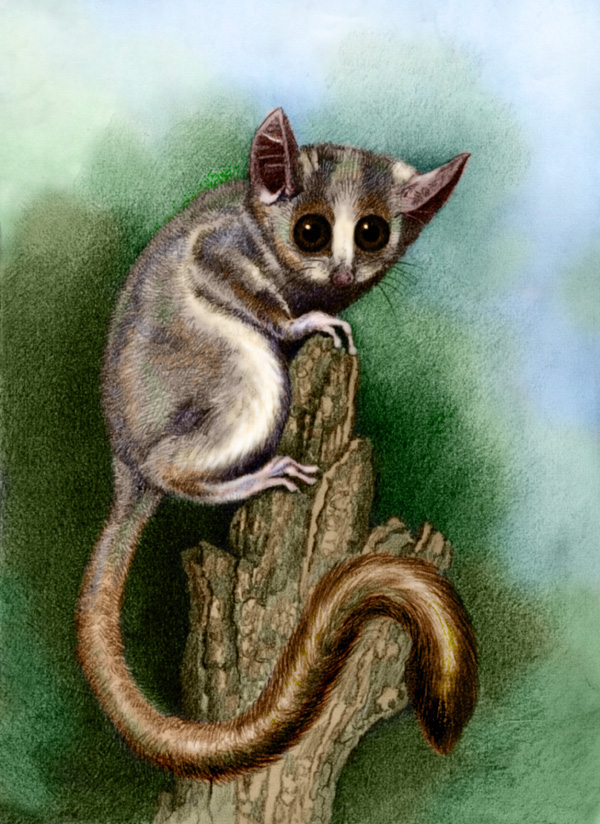 Here's another little critter from South Africa's huge neighbour island, Madagascar. This is a Grey Mouse Lemur, Microcebus murinus. Its scientific name means 'mouse-like micro-monkey'. This is the most widespread species among the mouse lemurs, occurring in most of the forests around the western edge of Madagascar as well as in one patch in the southeast. It likes regions with lots of thin branches and twigs, its size and dexterous little fingers helping it scramble and scurry about. Mouse lemurs are the smallest of the primates, the group that includes lemurs, bushbabies, pottos, lorises, tarsiers, monkeys, apes and ourselves.

Like the Oribi, the grey mouse lemur is in the rather ironic situation of being the largest member of a group of dwarves. In its own genus, Microcebus, it is the largest species, which here means it weighs from 40 to 70 grams, while the very smallest, Madame Berthe's Mouse Lemur, weighs a mere 30 grams. The grey mouse lemur is still very, very small, smaller than Africa's smallest primate, the Dwarf Galago, and also much smaller than the smallest monkey in South America, the pygmy marmoset. The grey mouse lemur has a total length of 25 cm-28 cm/10"-11", of which about half is tail. It varies in weight with the seasons, putting on a lot of fat towards the end of summer, much of it carried in its tail, as an energy store to help it last out the dry winter.

For long, there was thought to be only a single species of mouse lemur in Madagascar, occurring in most of the drier and some of the wetter forests. Today, twenty-four species are known! These are not all real new discoveries, that is to say, entirely new populations found to be new species. Instead, they're species that have been split off from the main group of mouse lemurs when genetic studies indicated that they're different. Outwardly, all mouse lemurs look very much alike, apart from minor details of size and coloration. But genetically and biologically the species are distinct; even in areas where more than one species overlap, they do not interbreed and keep themselves separate.


What's happening, is that mouse lemurs get separated into different patches of forest, and this physical separation in time leads to genetic differences. Evolution is always happening; much of it is not really significant in terms of adaptation, but a kind of neutral drift, so that animals in one group start acquiring certain characteristics, while animals in another group acquire different characteristics, and when enough times goes by, there's a significant difference between the two groups. Mouse lemurs are seemingly great for this: being so small, they can survive in small forest patches, and being rapid and fecund breeders, there's a lot of genetic activity and change going on among them. The phenomenon of many species arising rapidly out of one, is called adaptive radiation. It is likely a fairly recent phenomenon among the mouse lemurs, since the species are still all very similar. With a few million years more of evolution, though, all the species that survive may end up looking and behaving quite differently.


As for their behaviour, mouse lemurs are nocturnal generalists. Their big eyes help them see well so long as there's some light from the moon or stars to hunt by. Like cats, they have a reflective layer called a tapetum lucidum at the rear of their eyes. They catch insects and other small critters, sometimes on the ground, pinpointing them by sight, pouncing on them and grabbing them in their little hands. They eat much plant food as well: fruit, flowers, nectar (being important pollinators for some forest trees), gum oozing from wounded tree bark, and the sugary sap oozing from the bums of some plant lice! They can jump expertly, sometimes clearing 3 m/10', and on the ground they hop about on their hind legs such as some other lemurs like the sifakas.


Mouse lemurs have varied rates of activity throughout the day and the year. In some places in Madagascar the days can get quite cold; in such places the lemurs go into a state of torpor each day, slowing down their metabolism and cooling their body temperature down. In the dry season this happens for an extended period, the lemurs cooling down until they're no warmer than their environment, and resting like that until the cold months pass. At least, this happens for the females; the males seem to maintain a more active winter lifestyle, just slowing down for a few days at a time.


Like other primates, mouse lemurs are big on communication. They have wet noses with an excellent sense of smell, marking their territories with urine and faeces by the scent of which they can identify each other. They also communicate by sound, their calls including very high-pitched whistles, trills and chirps, some beyond the range of human hearing. These calls differ between the different mouse lemur species, but there are also regional differences or 'dialects' within the species. What's more, these differences aren't innate but can be learnt, a mouse lemur immigrating to a different region soon picking up the local dialect.


The mating system of mouse lemurs is rather promiscuous: the males will attempt mating with many females, and while some males will try to restrict access to 'their' females, the females themselves will actively seek to mate with several males. Babies are born just before the onset of the rainy season, when most food would be available. There's usually two or three, but up to four, babies per litter. They're born in a warm, comfy tree hole or nest. Their mom will either leave them in the nest, or carry them in her mouth and deposit them on a branch when she reaches the place where she wants to forage. Often different females will put their babies together in the same nest. By the age of two months, the babies can seek food themselves, but they attain sexual maturity only from the age of seven to ten months or sometimes after more than two years. Related females tend to stay close together, but males disperse as they seek their own territories.


At present, the grey dwarf lemur is one of the most abundant remaining species on Madagascar. It is preyed upon by owls, eagles, hawks and falcons, by a few snakes, and by mammalian predators like mongooses and fossas, but its fertility means that these losses are soon recovered. Mainly, it suffers from the ongoing forest destruction by humans. It is vital that this destruction stops, not just for its sake, but for the sake of all the remaining wild wonders of that great island continent.